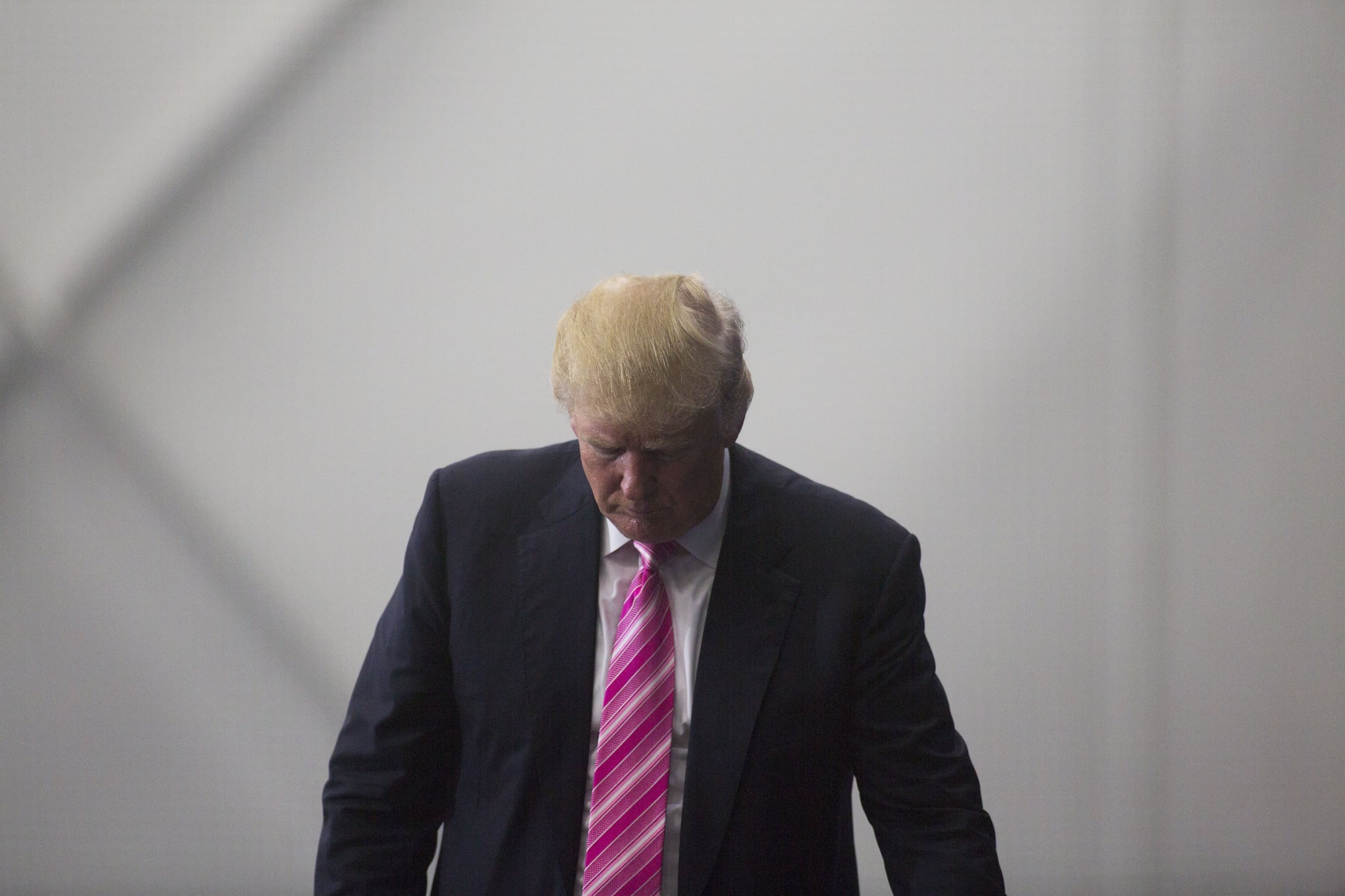 Donald Trump's campaign has been busy putting out several fires over the last three days. While the GOP candidate is used to scandal and mishaps, this week has been especially full of bombshells like The New York Times's revelation of his 1995 tax return and The Associated Press's discovery about how he treated women on The Apprentice.

This follows another crippling week for the candidate. After the first presidential debate last Monday, pundits overwhelmingly agreed Hillary Clinton won against an ill-prepared Trump. He was also heavily criticized for the comments he made about Alicia Machado, the former beauty queen whom he taunted and called "Miss Piggy." After Clinton brought this up during the debate, Trump appeared on TV on Tuesday to say Machado had "gained a massive amount of weight" when she was Miss Universe and took it a step further by calling Machado "disgusting" and accusing her of having a sex tape on Friday morning.

Here's a breakdown of what's happened since then.

1. The Times releases a copy of Trump's tax return.

The Times published Trump's state tax return from 1995 on Saturday. An anonymous source mailed a financial reporter named Susanne Craig a copy of the tax return in August, and Trump's former accountant confirmed the document's authenticity. It revealed that Trump reported a $916 million loss in 1995 that could have allowed him to avoid paying taxes for up to 18 years after he filed.

Trump isn't denying the claim either. During a campaign rally on Oct. 3 in Colorado, he told the crowd, "I have legally used the tax laws to my benefit and to the benefit of my company."

.@realDonaldTrump: "I have legally used the tax laws to my benefit and to the benefit of my company" https://t.co/msdHQRZBrk

In a response to The Times story, a statement from Trump's campaign read, "Mr. Trump is a highly-skilled businessman who has a fiduciary responsibility to his business, his family and his employees to pay no more tax than legally required."

2. The AP releases an investigation into how Trump treated women on The Apprentice.

The Associated Press interviewed more than 20 former cast and crew members from Trump's show The Apprentice about his behavior during production. Their investigation, published on Monday, revealed a predictable history of making inappropriate, lewd, and misogynist remarks about female cast and crew members.

The former contestants and crew were interviewed separately, but shared the same observations and experiences from the set. "Eight former crew members recalled that he repeatedly made lewd comments about a camerawoman he said had a nice rear, comparing her beauty to that of his daughter, Ivanka," the report reveals. Gene Folkes, a former contestant, said that "Trump called for female contestants to wear shorter dresses that also showed more cleavage."

Throughout the show, Trump was known to rate women, say if he would sleep with them or not, and frequently comment on their appearances in front of them. He also reportedly forced a female contestant to "twirl before him so he could ogle her figure." Hope Hicks, Trump's campaign spokesperson, denied the allegations. "These outlandish, unsubstantiated, and totally false claims fabricated by publicity-hungry, opportunistic, disgruntled former employees, have no merit whatsoever," Hicks said.

While Trump's history of sexism and misogyny is widely reported, this report further supports the idea that Trump has little respect for women beyond their physical appearance.

3. The Trump Foundation receives a cease and desist letter to stop operations in New York.

According to CBS News, New York attorney general Eric Schneiderman ordered the Trump Foundation to stop fundraising on Monday because it is not properly registered to do so in the state.

New York state law says that charitable foundations that solicit contributions must register with the state's Charities Bureau. The Trump Foundation has solicited donations this year despite not registering with the state's bureau. The cease and desist letter commanded, "The Trump Foundation must immediately cease soliciting contributions or engaging in any other fundraising activities in New York."

Schneiderman announced he was investigating the Trump Foundation in mid-September. Initial investigations revealed that Trump used his charity's money to make an illegal political donation and even purchased a painting of himself.

4. Trump suggests veterans with PTSD are not strong.

.@realDonaldTrump under fire for comments on veterans with PTSD https://t.co/KSlcRKo3jt https://t.co/4U1XTI0d01

While addressing a panel for the Retired American Warriors PAC in Virginia on Monday, Trump suggested that veterans suffering from PTSD were not strong enough to handle it.

"When people come back from war and combat and they see things that maybe a lot of the folks in this room have seen many times over and you're strong and you can handle it, but a lot of people can't handle it," Trump said.

Though Trump did say access to mental health care for veterans requires improvement, people on Twitter were quick to point out his misstep:

I guess my buddy who I deployed with, who suffered from PTSD, and who took his own life wasn't as strong as a roomful of Trump's supporters. https://t.co/iLb5V4PYs8

Trump has some nerve saying veteran's with PTSD aren't strong when he skipped service all together by saying he had "bone spurs."

My God. Shame on Trump for attacking bravest who return suffering from PTSD. This from a man who dodged draft & shunned any public service.

5. He mocks Hillary Clinton's pneumonia at a campaign rally.

At a campaign rally in Pennsylvania on Saturday, Trump impersonated the viral video of Clinton staggering to her car at the Sept. 11 memorial. Clinton, who was diagnosed with pneumonia, had to leave the memorial early because she was ill. Trump mocked her weakness, saying, "She's supposed to fight all these different things, and she can't make it 15 feet to her car," he said.

Unfortunately this is not the first time Trump has ridiculed someone for an ailment. Last November, Trump was sharply criticized for mocking a reporter who has congenital joint condition, according to the BBC.

6. Documents reveal The Trump Organization did business with an Iranian bank tied to terrorism.

The International Consortium of Investigative Journalists (ICIJ) recently reviewed public records pertaining to the Trump Organization's business dealings. Their investigation found that one of Trump's tenants at one of his Manhattan real estate holdings was Bank Melli from 1998 to 2003. Bank Melli is a state-operated bank in Iran that the United States government has accused of sponsoring terrorism.

It's unclear whether accepting rent payments from the Bank was illegal despite the government-imposed prohibition on business with Iran, because there are some exceptions to the embargo. Iranian businesses were given licenses to operate in the US and, according to ICIJ, "If the payments were licensed, it may have been legally difficult for the Trump Organization to evict the bank."

Trump's dealings with a bank controlled by the Iranian government are problematic for another reason, though. The ICIJ also points out his hypocrisy related to foreign policy: while Trump accuses the Clinton of pay for play, he himself accepted money from a government that is uncooperative with the United States.

Richard Nephew, who worked for the State Department as a coordinator of sanctions policy, told the ICIJ, "It suggests that his principles are pretty flexible when it comes to him getting paid." The Trump campaign did not answer any questions about Bank Melli when asked by ICIJ.

It's only Monday, and Trump has already amassed a hefty list of scandals. Who knows what he will do the rest of the week? We can predict one thing, though: Trump is going to come out swinging during Sunday's second presidential debate.

Donald Trump
Greta Thunberg Trolled Trump Again . . . and as He Was Leaving the White House, No Less
by Kelsey Garcia 11 hours ago