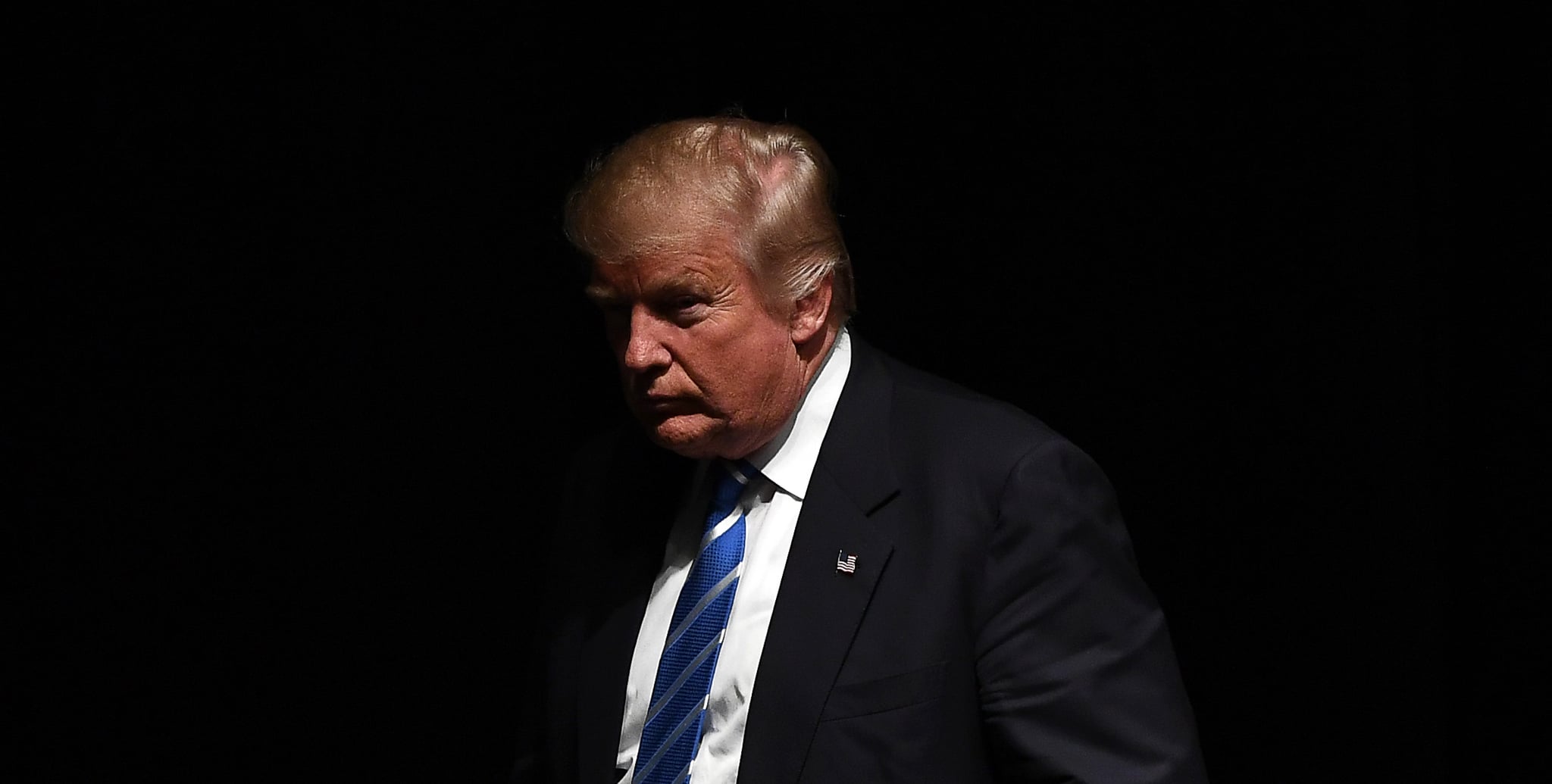 A presidential nominee just slut-shamed a woman. Early Friday morning, Donald Trump unleashed a storm of tweets bashing Alicia Machado, the 1996 Miss Universe winner whom he humiliated and called "Miss Piggy" for gaining weight. Hillary Clinton mentioned Machado's story during the first presidential debate on Monday and said the Venezuelan-born beauty queen had recently gotten her US citizenship and was planning to vote against Trump. On Tuesday, Trump went on Fox and Friends to say Machado had "gained a massive amount of weight" after she won the title.

He didn't stop there because on Friday morning at about 5:30 a.m. EDT, the GOP nominee tweeted three troubling messages calling Machado "disgusting," accusing her of having a sex tape, and saying the Clinton campaign helped her become a US citizen.

Wow, Crooked Hillary was duped and used by my worst Miss U. Hillary floated her as an "angel" without checking her past, which is terrible!

Using Alicia M in the debate as a paragon of virtue just shows that Crooked Hillary suffers from BAD JUDGEMENT! Hillary was set up by a con.

Did Crooked Hillary help disgusting (check out sex tape and past) Alicia M become a U.S. citizen so she could use her in the debate?

Clinton responded to Trump's new comments both on Twitter and on Instagram on Friday. She said said they were "unhinged, even for Trump" and asked, "What kind of man stays up all night to smear a woman with lies and conspiracy theories?"

This is...unhinged, even for Trump. A few notes. What kind of man stays up all night to smear a woman with lies and conspiracy theories? Alicia deserves praise for courageously standing up to Trump's attacks. And he has the gall to blame her for his cruel behavior—and even say he "helped"? When something gets under Donald's thin skin, he lashes out and can't let go. This is dangerous for a presidential candidate, never mind a president. What's more: This is a pattern of flying off the handle at women who defy, criticize, or otherwise displease Trump. To Donald, women like Alicia are only as valuable as his personal opinion about their looks. He obsessively bullies Rosie O'Donnell, an accomplished actor. He calls female reporters and news hosts who question him ""crazy"" and "neurotic," or worse. He insulted Kim Kardashian for her weight—when she was pregnant. It's pathetic. We've heard Donald's insults for years, and his policies reflect this disregard—even contempt—for women: On equal pay, Trump says women should just "do as good a job" as men. He thinks women who get an abortion should be "punished." He called pregnancy an "inconvenience" to employers. Wives working are "dangerous." He's never hidden how he truly feels about women, but it's never been clearer than right now: he doesn't respect half the population of this country—and he doesn't deserve to lead it.

Others reacted to Trump's comments with just as much disbelief:

Did a presidential candidate just ask me to check out a sex tape? https://t.co/2yKCL2o8Z2

dude goes on Twitter rant and tells everyone to watch a sex tape of a woman he hates. Some of y'all think that dude should be president?

Washington "I cannot tell a lie"
FDR "The only thing we have to fear-"
JFK "Ask not what your country can do-"
Trump "check out sex tape" https://t.co/bcBroj9Ofr

Trump's continued comments about Machado's weight and supposed sex tape are certainly disturbing and reflective of his unabashed misogyny. (Even if she had a sex tape, why would that make her story about his bullying any less valid?) But his tweets represent much more than that. They show a man who can't control his anger when someone hits him where it hurts; they reveal a man unfit for the presidency. Clinton knew this might happen when she brought up Machado during the debate. All she had to do was sit back and watch him unravel.