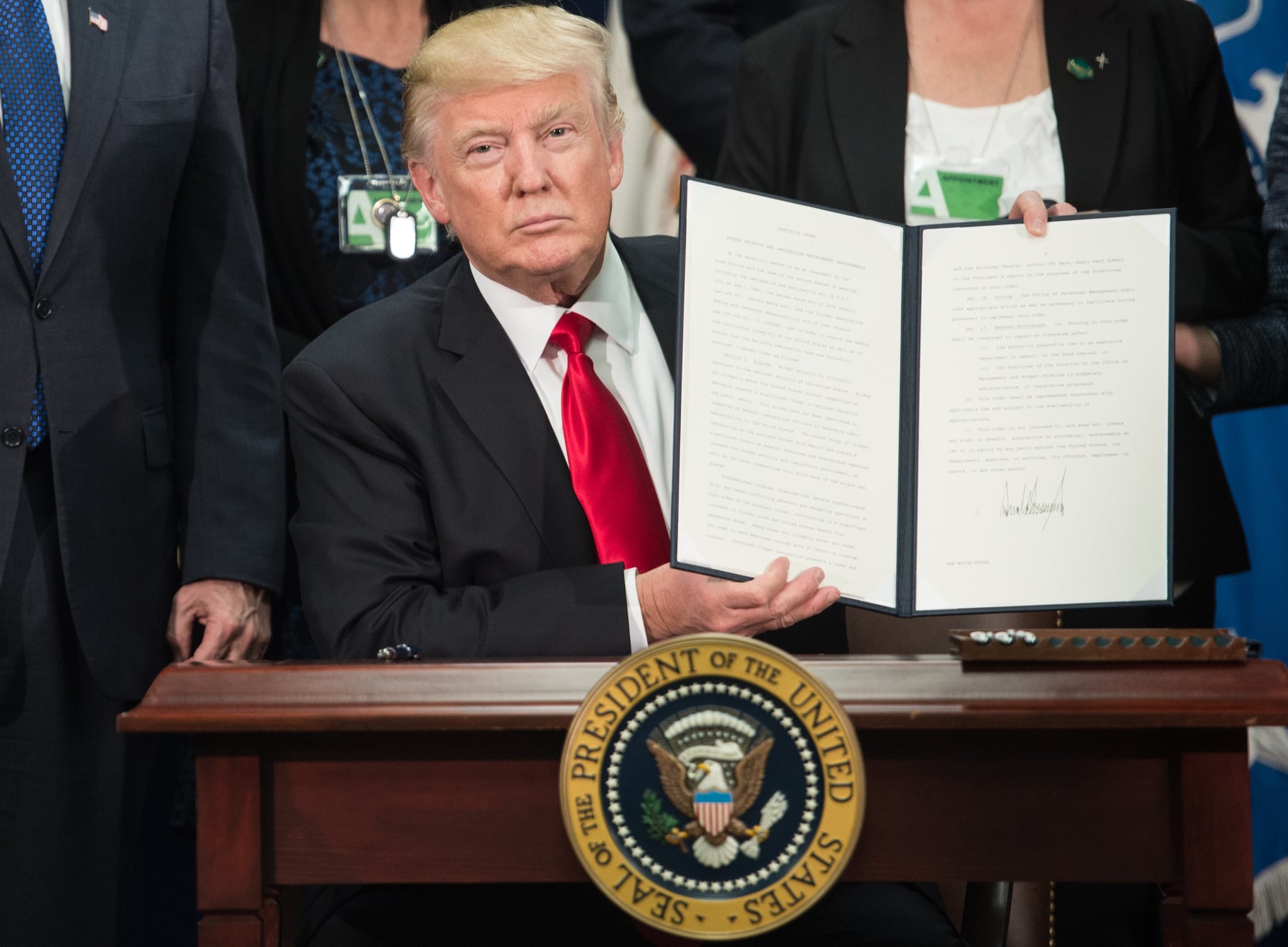 In his first week as president, Donald Trump signed a series of executive orders aimed at delivering on the promises that led to his election. Among those campaign pledges that Trump has already addressed: undoing the Affordable Care Act, building the US-Mexico border wall, lifting federal prohibitions on drilling, and banning refugees and citizens from Muslim countries as well.

Trump's administration has also instituted a temporary communication ban on the Environmental Protection Agency and Department of Human Health Services. Although it's not an executive order, Trump instructed those agencies to stop sending out news posts, specifically on social media.

While his executive orders might seem dramatic or even dystopian, it's important to recognize that a signature does not necessarily indicate immediate action. In the coming days, President Trump will likely sign more distressing directives, but there's no guarantee he will be able to fully actualize these orders.

Newly inaugurated presidents typically sign sweeping executive actions during their first 100 days to demonstrate their commitment to constituencies. During President Obama's first week, he signed roughly the same amount of executive orders as Trump — he famously closed Guantanamo on day one, but that prison remains operative (and could expand during Trump's presidency).

Ahead, check out a running list of Trump's executive orders that we'll continue to update as he enacts more.

Trump reinstated the global gag order, also known as the Mexico City Policy, that was introduced by President Reagan in 1985. The policy prohibits federal aid to family planning organizations that counsel on or provide abortions.

Other than in the military or public safety positions, Trump has temporarily frozen hiring for federal agencies with open positions. Trump's intention is to reduce the size of the federal government workforce over time.

3. Dismantling of the Affordable Care Act

With help from the Republican-held Congress, Trump initiated plans to dismantle Obamacare. On Jan. 23, he signed an order that will "minimize the unwarranted economic and regulatory burdens" of the Affordable Care Act. Essentially, this means that federal agencies do not have to comply with the law if it is fiscally straining.

4. Withdrawing from the Trans Pacific Partnership

Trump rejected Obama's TPP trade deal and withdrew from the alliance, as he promised to do. His reasoning? Refusing to ratify the TPP might make it easier to keep jobs in America.

Like the federal hiring freeze, Trump also froze the implementation of all federal regulations currently awaiting approval. Regulations like climate policies that Obama instituted during his final week will be reviewed by Trump's administration.

Trump signed an order that would immediately renew construction of the North Dakota Access Pipeline that the Army Corps of Engineers halted in November. Additionally, Trump overturned Obama's rejection of construction of the Keystone Pipeline, which would transport shale from Canada to the Gulf Coast.

The wall between Mexico and America will be built, according to another order signed by Trump. Responding to the threat of domestic terrorism, Trump has also signed a directive to block refugees from Syria from entering America as well as a 90-day on halt anyone from Iraq, Syria, Iran, Sudan, Libya, Somalia, or Yemen from entering the country, according to New York Times. Syrian refugees will reportedly not be allowed to enter the country for an indefinite amount of time. Refugees from other countries will have their cases reviewed after a 120-day halt on processing.

Trump issued a somewhat vague order which requires the repeal of two federal regulations for every new regulation implemented. Aimed at limiting regulations for businesses, Trump described the order as beneficial for reducing governmental regulations' "damaging effects on our small business, our economy, [and] our entrepreneurial spirit."

9. Restructuring of the National Security Council

In the midst of considerable backlash to his immigration ban, Trump quietly restructured the National Security Council. The president promoted his Senior Adviser, Steve Bannon, to a position on the council (which is typically reserved for Generals). The Joint Chiefs of Staff, who have historically advised the president on matters of National Security, were demoted to optional meeting attendance. The White House defended the reorganization by claiming the Joint Chiefs of Staff's presence might not be required for every meeting and falsely claiming the order mirrored directives from W. Bush and Obama.