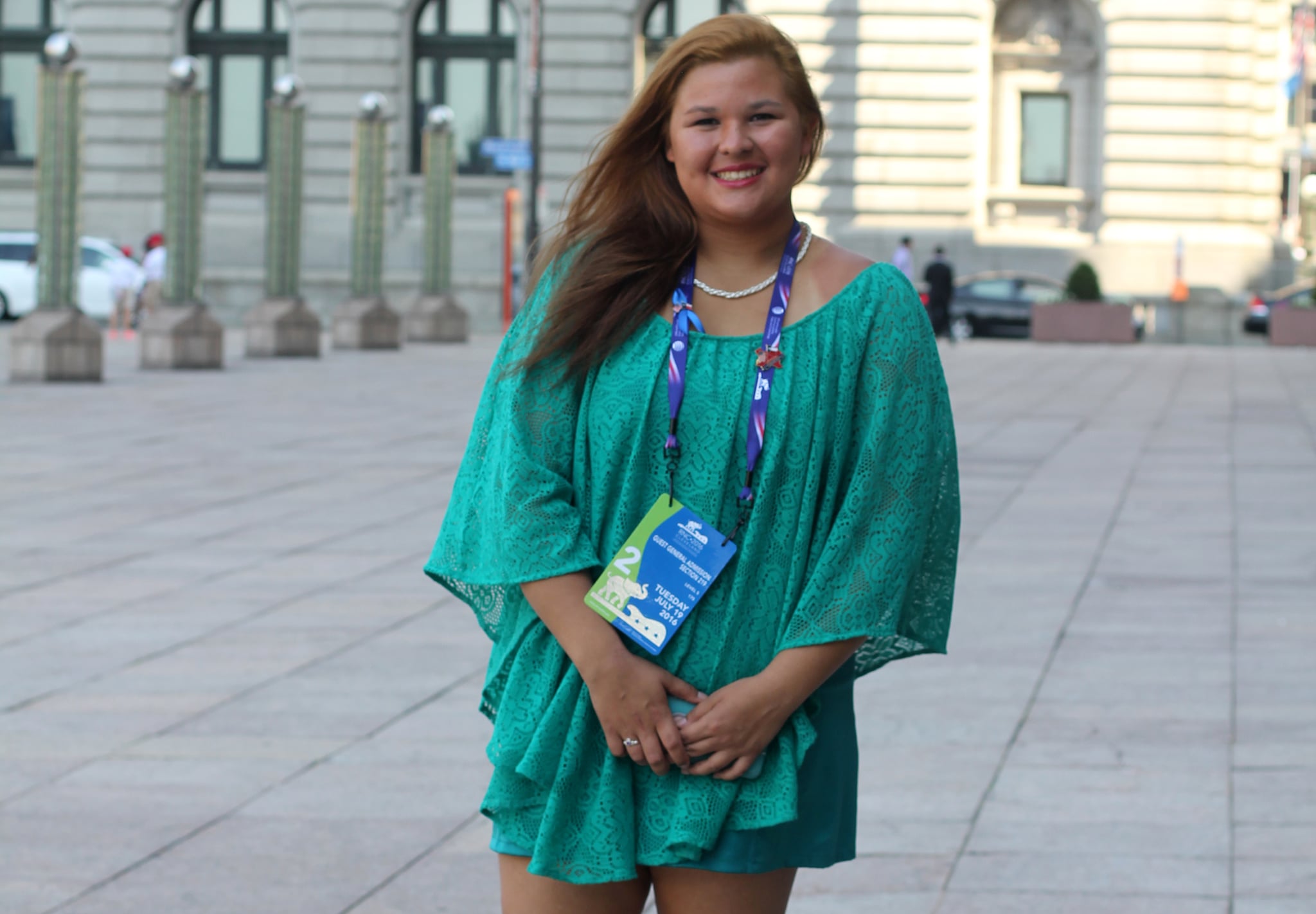 Close your eyes and picture a Donald Trump supporter. Chances are you didn't imagine a 21-year-old female college student of Mexican, Taiwanese, and European descent. But that's how you'd describe Elizabeth Berecin, who goes to Texas State University in San Marcos and is a social media director for Students For Trump.

We first met Berecin while looking for young minorities at the Republican National Convention (spoiler: they were hard to find). Wearing a teal dress with cowboy boots during the July convention in Cleveland, she said she was voting for Trump because she believed he could boost the US economy thanks to his business experience. She used to like Hillary Clinton in 2008 — she even went to the Texas Democratic primary caucus with her grandfather in support of Clinton back then — but changed her mind after she became disappointed by Clinton's Benghazi scandal.

Berecin hasn't changed her mind, however, about now president-elect Trump despite being afraid of openly declaring herself a Trump supporter on her college campus. His numerous scandals in the months since the RNC haven't changed her mind either. The leaked video of him bragging about sexually assaulting women? Nope. The New York Times report that he likely evaded paying taxes for almost 20 years? Nuh-uh. The more recent news that he settled his Trump University fraud lawsuit or that his hotels pose a massive conflict of interest when delegates perceive staying there as a way of garnering favor? Yeah, right.

She's looking forward to his presidency.

"I still like this economic plans. I am worried about trade in this country," she said in a recent post-election interview with POPSUGAR. "We need to bring our jobs back in this country and have a wage that is competitive. Trump is bringing in a larger scope of Republicans than ever before."

Berecin is worried about some aspects of his upcoming presidency, such as his lack of political experience and his controversial appointment of Steve Bannon as chief strategist ("It's not a choice I saw coming and not one I'm super thrilled about. But I don't know which way he's going to go.").

Find out more about what it's like being a young Trump supporter now that he's president-elect by reading her story as told to POPSUGAR.

I was watching it with the Dallas County GOP in Texas. We were worried going into the election because a lot of negative things about Trump had come out, but when FBI Director James Comey said that he would look into Hillary Clinton's emails further, we thought, "OK, we still have a chance." Seeing Trump take Ohio, Florida, North Carolina, Michigan, Pennsylvania — some of those states we thought might go red, but when they did turn red, that guaranteed us the election. Everyone was in tears. After months put into this campaign and harassment calling us racist, misogynistic white supremacists, after all the bullying and name calling, we were like, we did it.

How it has affected her relationships

Most of my family were Trump supporters before I was, but when it comes to friends, some of us choose not to talk politics with one another. Because they say, "You're not racist but Trump supporters are," and I take that offensively. I've met the people that were out there at his rallies and a lot of them have no hatred in their heart. They're worried about jobs and the economy and how they're going to feed their kids. I've heard friends say disrespectful things about a lot of us who voted for him.

Being fearful as a Trump supporter

"People are protesting his win and that scares us. We thought were going win this election and the name calling would be over and it's not."

The fear is very real, especially among college campuses right now. Some of the professors at my school said the GOP was racist, and they compared Trump to Hiram Evans of the KKK in one of my classes. When we had election rallies on campus, people came up to me and said I was brave for wearing a Trump shirt on campus. I had other people tell me that they support Trump too but weren't going to say it out loud because they feared being labeled a misogynist or racist. People will still not come out and say they voted for Trump because they're worried that people will still call them those names. People are protesting his win and that scares us because we thought were going win this election and it would all be over and it was going to go away. And it's not.

Reaction to the spike in hate crimes

I recognize that that's going on and condemn all of them because I don't want what the movement was about to be overtaken by extremists. I know there are some people who believe in "Make America white again," but putting the Nazi swastika on buildings — that's not OK. I believe there are always going to be racist people in the country, but as time changes, people do become more accepting. If I could tell them one thing, it would be to stop. You're not doing anything for this country by spreading hate. Hate shouldn't be spread by either side.

Whether his supporters were duped now that he's gone back on some promises, like prosecuting Hillary Clinton

I know some of his supporters are upset about that. But a lot of people who voted for him have never been exposed to politics before. I'm not really surprised by this. You can't fulfill everything you say you will because there are so many hoops to get through.

A lot of the stuff he said was not the most pleasant, but we live in a world and a culture where it's perpetual; a lot of women have become numb to hearing what's said and we know how men talk about us with regard to our body. Here we are trying to hang this one misogynist and trying to condemn him. I think that's why Trump did not lose a lot of women.

I think more about what he's actually done because his actions show me who he is more than his words do. He put his female employees in charge of construction, he's promoted women at his corporation for years, he was the first to hire a female campaign manager.

"I look at Ivanka and think, 'Wow, how could a misogynist have raised that?'"

I look at Ivanka [Trump] and think, "Wow, how could a misogynist have raised that?" I think he said some of the stuff for media attention honestly, and that's how he won.

There are a lot of misguided fears and hysteria that Trump is going to get rid of same-sex marriage and outlaw abortion, but in reality the Supreme Court has ruled on that; he can't just take away those rights. If he appoints Supreme Court justices that are anti-abortion, I would question if they would overturn Roe v. Wade because they're supposed to be impartial and would stick with the precedent. Most of the time we don't go backward with our laws. In general, I think he'll be more inclusive than if Ted Cruz had won.

On having any sympathy for Hillary Clinton

I don't hate her, and I think she's accomplished a lot as a woman; I'm excited at the idea of shattering the glass ceiling, but I don't think somebody should take the office or should be voted for because she is a woman. There were a lot of scandals surrounding her, like foreign government donations to the Clinton foundation that looked like pay to play. I'm also a strong military supporter, so Benghazi did it for me.

I will say that Bernie Sanders does believe in what he says. You know he's there because he's actually trying to help people. I did not see the same thing from Hillary. She did politics how she knew how — how everyone else has run a campaign. Trump changed the status quo; in all reality, she should've won but she was not Barack Obama. She did not connect to the American people in the same way that Obama and Trump did. He connected to people and he told them he saw their problems and said he would fix them. His supporters were being marginalized and she called us deplorables. If that's what she's thinking, there's a bigger problem there.

My biggest concern is that he's new to politics, even though that was his biggest appeal. But I do believe he's going to have the biggest and brightest minds by his side. He's made a couple mistakes like not knowing he had to reappoint 4,000 people to work at the White House. But that stuff is going to happen; you're not going to know that stuff. Those mistakes I do expect from him and it's hard to say where it's going to come into play, but it won't matter for bigger things. He's not going to slip up when talking to foreign leaders. It's those small details of how to run the White House; that's where he might have some issues.

On his controversies in his first weeks as president-elect

I think what the Hamilton cast did [to Mike Pence] was just distasteful. No other VP has received that type of treatment. And I know Trump University lawsuits were out there since the beginning; I believe he settled them because it could have gone longer in court. I think the idea of foreign diplomats staying at his hotel isn't a big deal because it's not a large lump sum of money donated. They stayed at his hotels because it's one of the nicest hotels in NYC — I do see where people can draw the conclusion that it's a pay to play, but I don't think it's on the same scale.

Editor's note: Lawyers believe Trump will violate the Constitution once he's president if foreign diplomats continue to stay in his hotels.

"You probably have friends who are Trump supporters and don't know it because they don't say it."

Her message to people who are angry at Trump supporters

I would tell them to give us a chance, I would tell them to talk to us and see what we actually believe in. They probably have a lot of friends who are Trump supporters and they don't know it because their friends don't say it. We are going to move the party to what it needs to be for the next generation. Let us prove to you, but we can't prove anything or extend an olive branch unless someone is willing to give the olive branch back.

Identity
2022 Has Been a Dangerous Year For the LGBTQ+ Community. Here's How We Can All Help.
by Nayanika Guha 1 week ago