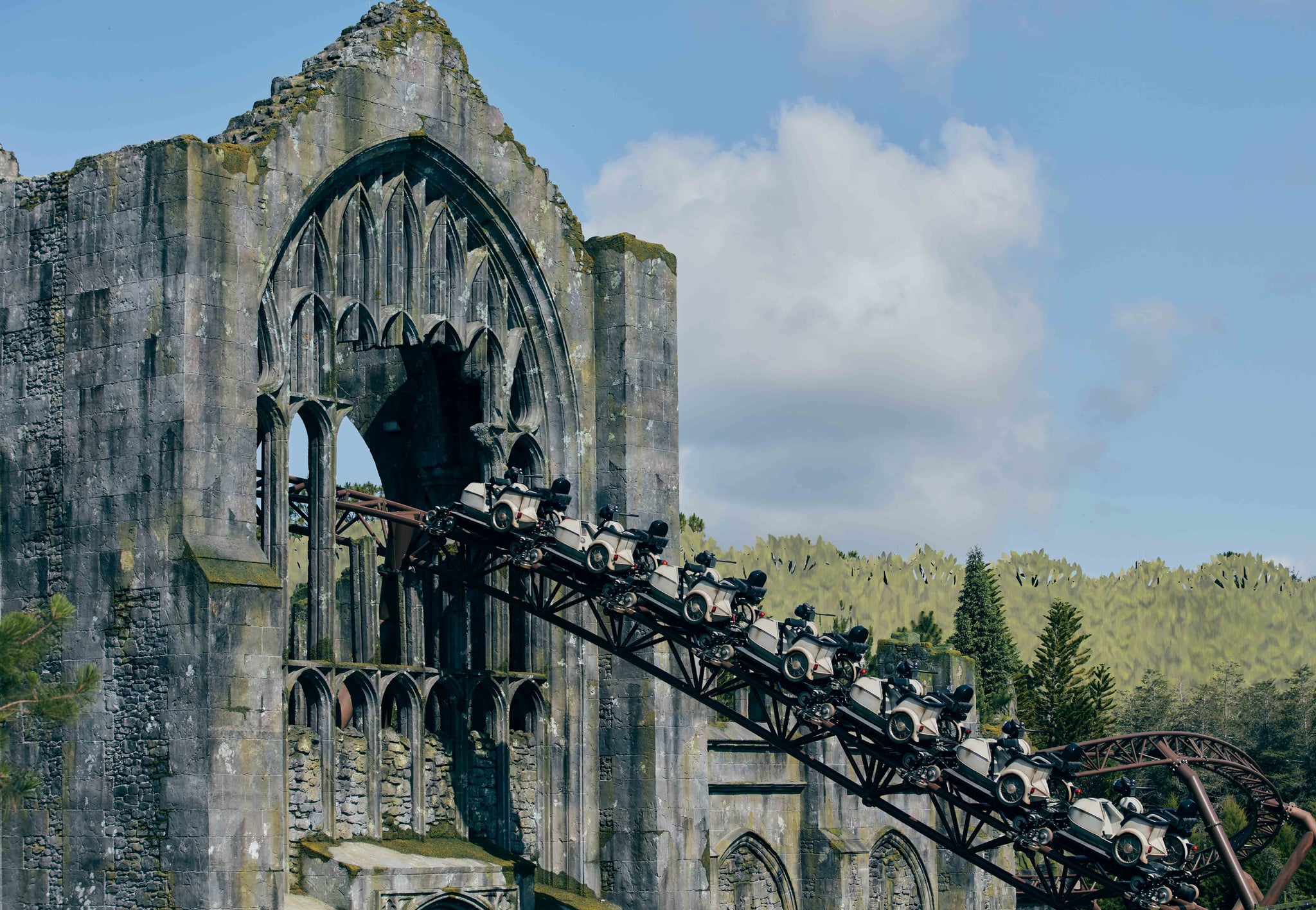 I've been a massive Harry Potter fan for as long as I can remember. From the books to the merchandise to the at-home recipes, I'm basically an A+ Hogwarts student without ever having received a letter (I'm still waiting, it's fine). So to say I love going to The Wizarding World of Harry Potter at Universal Orlando Resort is a massive understatement. Every single thing comes alive with the magic I know and love from the books and movies — whether it's Kreacher peeking his head out the window at 12 Grimmauld Place or the insanely delicious taste of Butterbeer. But just when I thought things couldn't get any better, Universal opened Hagrid's new roller coaster, and it is f*cking awesome.

Hagrid's Magical Creatures Motorbike Adventure, which officially opened in June 2019, is located in the Islands of Adventure park right next to the Hogwarts train station (it's where Dueling Dragons used to be). Now, if you're like me, the Harry Potter rides in the Islands of Adventure park might not be your favorite. There's the Flight of the Hippogriff coaster for younger kids and then there's Harry Potter and the Forbidden Journey, which makes me feel sick every single time (no Polyjuice Potion required). Will I always ride it and marvel at every detail of Hogwarts castle while waiting in line? Yes. Will I always regret going on for at least an hour after I get off? Yes. But Hagrid's Magical Creatures Motorbike Adventure is nothing like those. It's like nothing I've ever ridden before, and I mean that in the best way possible.

I will admit that I was a little skeptical at first. When I first saw it, it didn't look that epic. There were no massive drops or twists and turns, so I wasn't really sure what to expect. But after hearing that people were waiting 10 hours to ride it and saying it's the best new ride in all of Orlando, I knew it had to be good. And oh my God, is it good.

Described as the world's first "story coaster" because of how it presents its elements, you'll join Hagrid's Care of Magical Creatures class and enter the Forbidden Forest on magical motorbikes, riding in either the motorbike or an adjacent sidecar. (Fun fact: you're in an actual forest, too, as the ride is set among 1,200 trees.) You'll be launched forward numerous times at speeds of up to 50 mph, be shot up towards the sky right before the track ends, and fly backwards into a dark and dangerous cave full of Devil's Snare. And that is when the best part happens. The entire coaster track suddenly drops 16 feet onto another track before you're suddenly shot forward again to escape. And during all of this, you'll encounter typical Forbidden Forest creatures, like Centaurs, Cornish Pixies, Fluffy the three-headed dog, and Hagrid, who is sporting the actual costume worn by actor Robbie Coltrane in the Harry Potter films. (Another fun fact: they got Robbie's teeth mold for Hagrid's statue on the ride, so it's all incredibly life-like.)

If you can, absolutely ride in the front row motorbike. Because there was nobody in front of me, I actually felt like I was flying. And because I was in the motorbike and not the sidecar, I was slightly elevated, sitting forward, and holding onto the motorbike's handlebars. It was honestly the most fun I've ever had on a ride, and my entire family got off of it with the biggest smiles on their faces. We felt like little kids again, and we talked about it for days. While the wait times have definitely died down a little bit, they are still long, but it's absolutely worth it. I already can't wait to go back and ride it again. It's just that good. 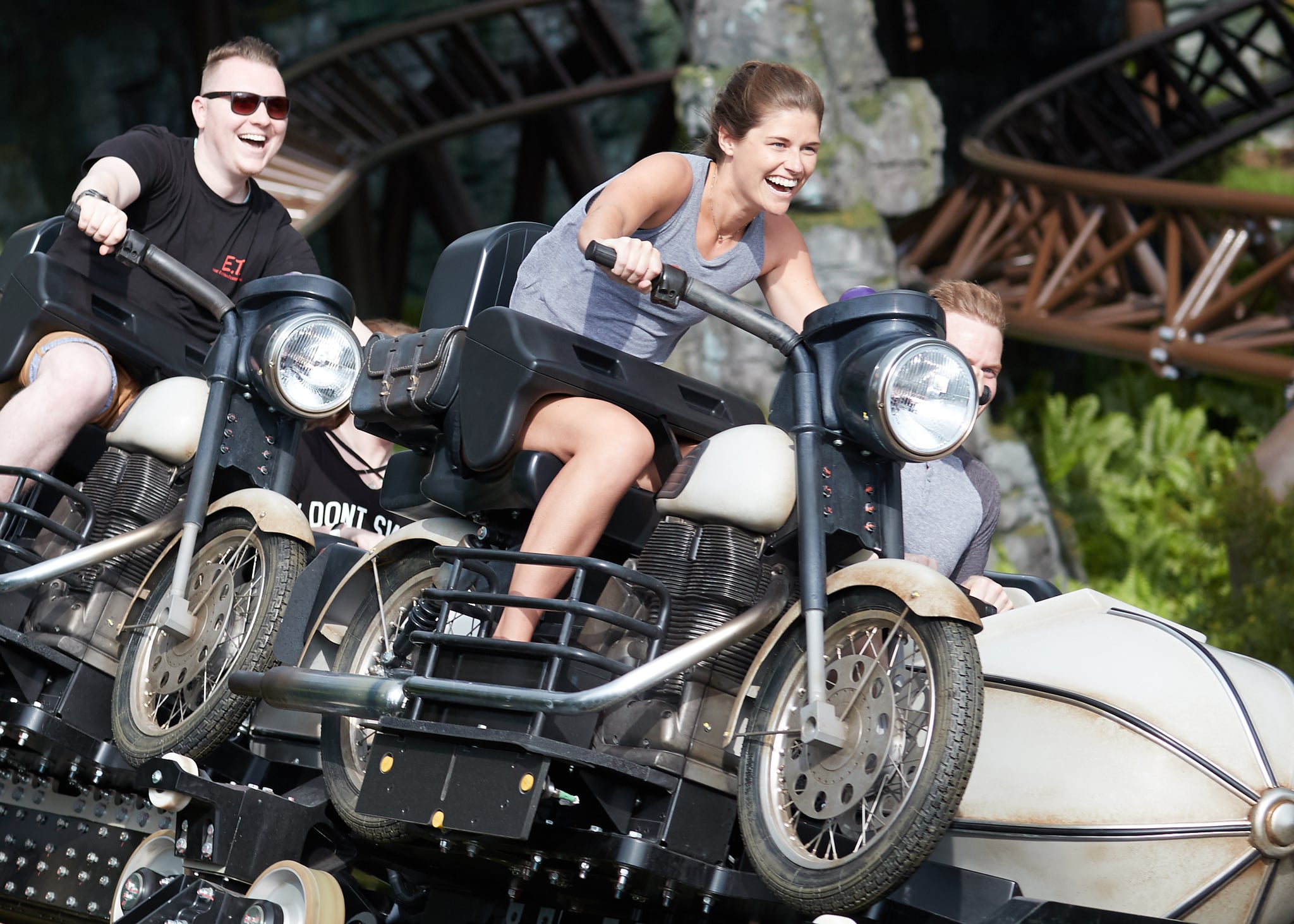