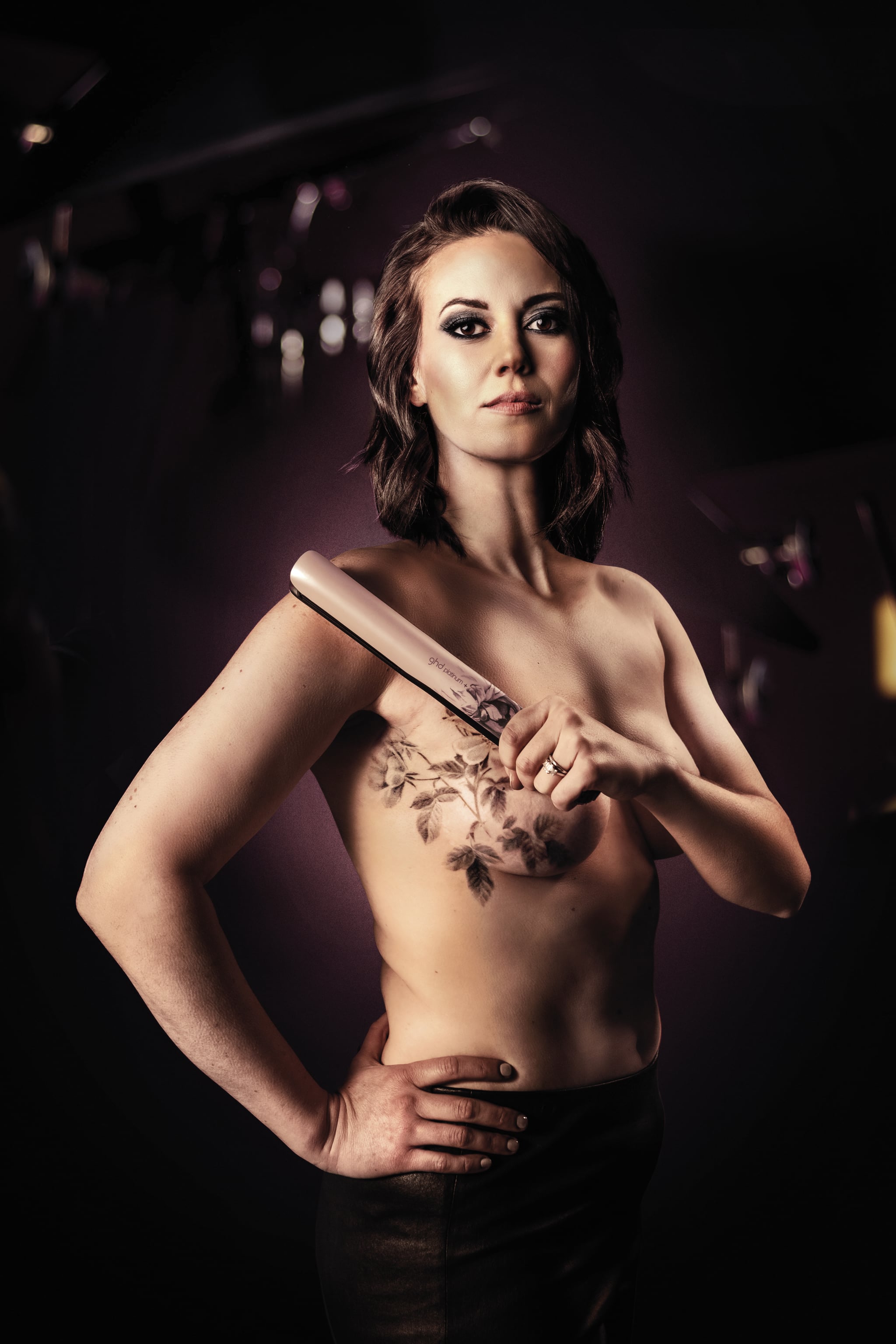 Before getting breast cancer, Grace Lombardo never considered getting a tattoo. "I was coming off of chemo when I saw an article in our local paper about tattoo artist David Allen and what he was doing for breast cancer survivors," Lombardo said. "So I went to his website, saw his designs, and instantly — as a person with no tattoos and no plans to get a tattoo — I knew I was going to get one. Fast-forward a few years and now the whole world knows all about Lombardo's beautiful mastectomy tattoo, as she and her ink are featured in the campaign for GHD's "Ink on Pink" collection, a launch that honors the brand's 15-year partnership with Breast Cancer Now. To celebrate the collection, POPSUGAR sat down with both Lombardo and Allen to talk about their collaboration with the brand, and the art and therapeutic nature of mastectomy tattoos in general.

GHD found Lombardo through Allen, whose artwork can be seen decorating the GHD Platinum+ and GHD Gold Stylers that are both part of the Ink on Pink collection. A Chicago-based tattoo artist, Allen — in addition to working with celebrities like Lady Gaga — specializes in mastectomy tattoos for breast cancer survivors, covering up or highlighting their scarring with his signature black-and-white floral designs. "Sometimes I wish I could do other things, but [floral designs] fit with the body," Allen explained. "Imperfections show with [designs] that are legible. If [the tattoo is] geometric or if it's words or birds, for example, wherever the scar is, it shows up really easily. But with flowers, it doesn't. Also, if you're going to have another surgery or any back grafting it's easy to fix the flowers. It's hard to fix up birds." 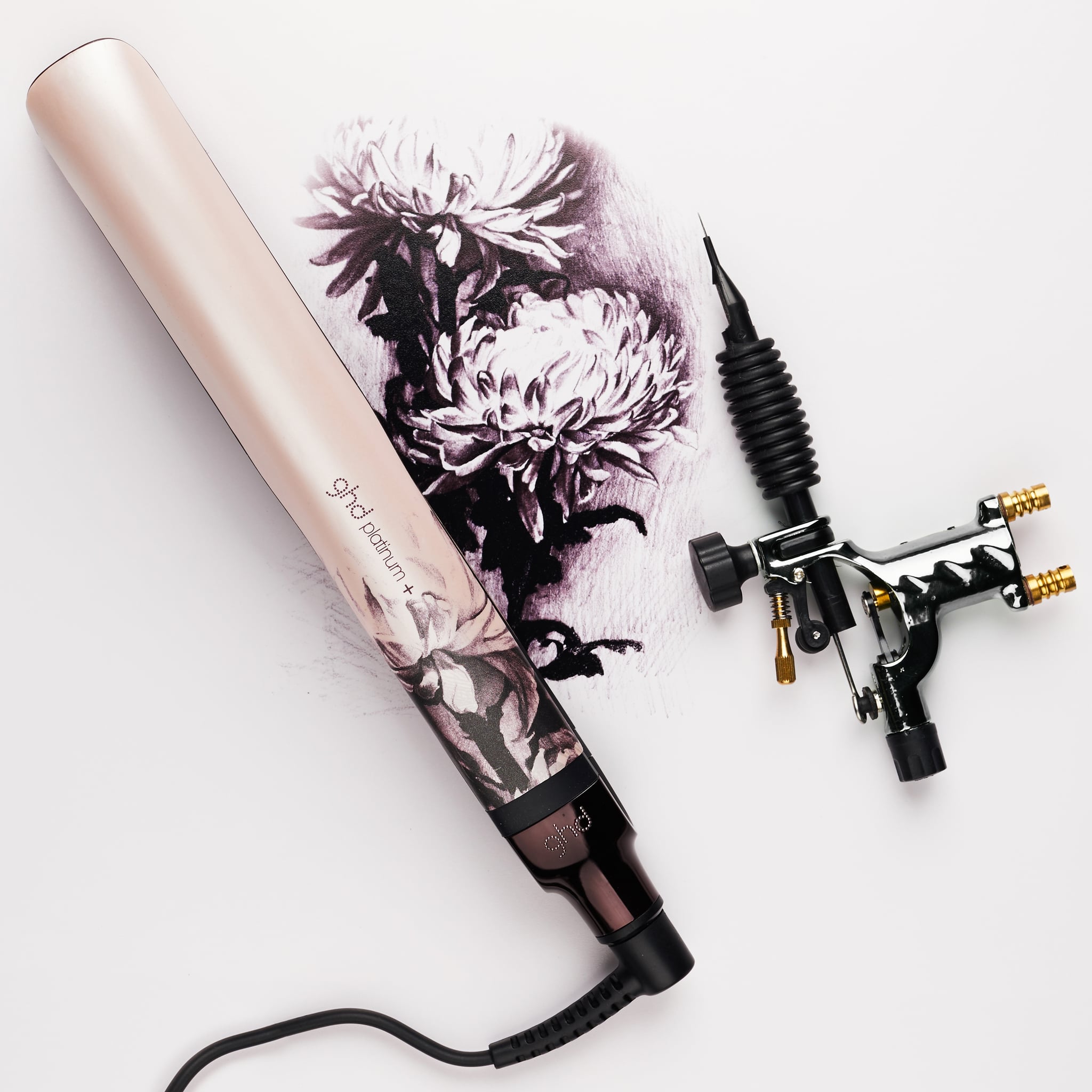 Allen, like Lombardo, happened upon mastectomy tattooing by accident. "A woman from New York liked my tattoos and asked me to use them to cover up her scarring post breast cancer," Allen said. "I was hesitant; I had no idea what I was doing and tattooing scar tissue is very different. But she told me I could experiment on her and so that's what I did." With the help of social media, Allen's first mastectomy scar cover-up went viral and the positive response prompted Allen to learn more. He began researching scarring and scar tissue, and as he studied, he began doing more and more mastectomy tattoos. "I didn't want to act like I knew what I was doing. But after about five or six of them, once I figured it out — that scar tissue is very dense and so you have to work slower, with small needles as opposed to large ones because you could really hurt the client — I let loose." Now, when you head to Allen's website, the only new clients he accepts are people looking for mastectomy and scarring pieces.

Getting a tattoo is an intimate and life-changing experience for anyone, but especially for breast cancer survivors, many of whom are looking for the tattoo to transform them both physically and mentally. "The tattooing takes about three to five hours, but the most important part is getting to know the person," said Allen. "I have to make sure that it's not about me. I have to make sure that I'm just facilitating a process because they attach themselves to it even more. They made it happen. They wanted it. They are taking that control. I am just a project manager."

"I used to really dislike looking in the mirror because it was so sad to see how my body had changed in a way that I did not choose. So I was looking to conceal my scars and turn this carnage of my body into something that was beautiful again."

For Lombardo, like many of Allen's clients, her mastectomy tattoo was about reclaiming her body on her own terms. "We talked about what was important to me in changing the way I see myself," she explained. "I used to really dislike looking in the mirror because it was so sad to see how my body had changed in a way that I did not choose. So I told David that I was looking to conceal my scars and turn this carnage of my body into something that was beautiful again. And that's exactly what he gave me. I ended up choosing these open roses with thorns on them, because I felt thorns were really important to my story."

For her, the tattoo took a few days to sink in, literally. "The very first thing I said was, 'How did you did this?' Because truly there was nothing there, and then suddenly there was this delicate, detailed piece of art on my body and I was gobsmacked. But it really did take a minute for me to get used to the tattoo, mostly because when you first get it, [the ink is] really dark and the skin's not happy. But David assured me it wouldn't stay that dark and that it was going to heal. There was never a moment that I didn't want it there, but it did take a while to not be shocked by seeing it. Now, I look in the mirror and it's just me." 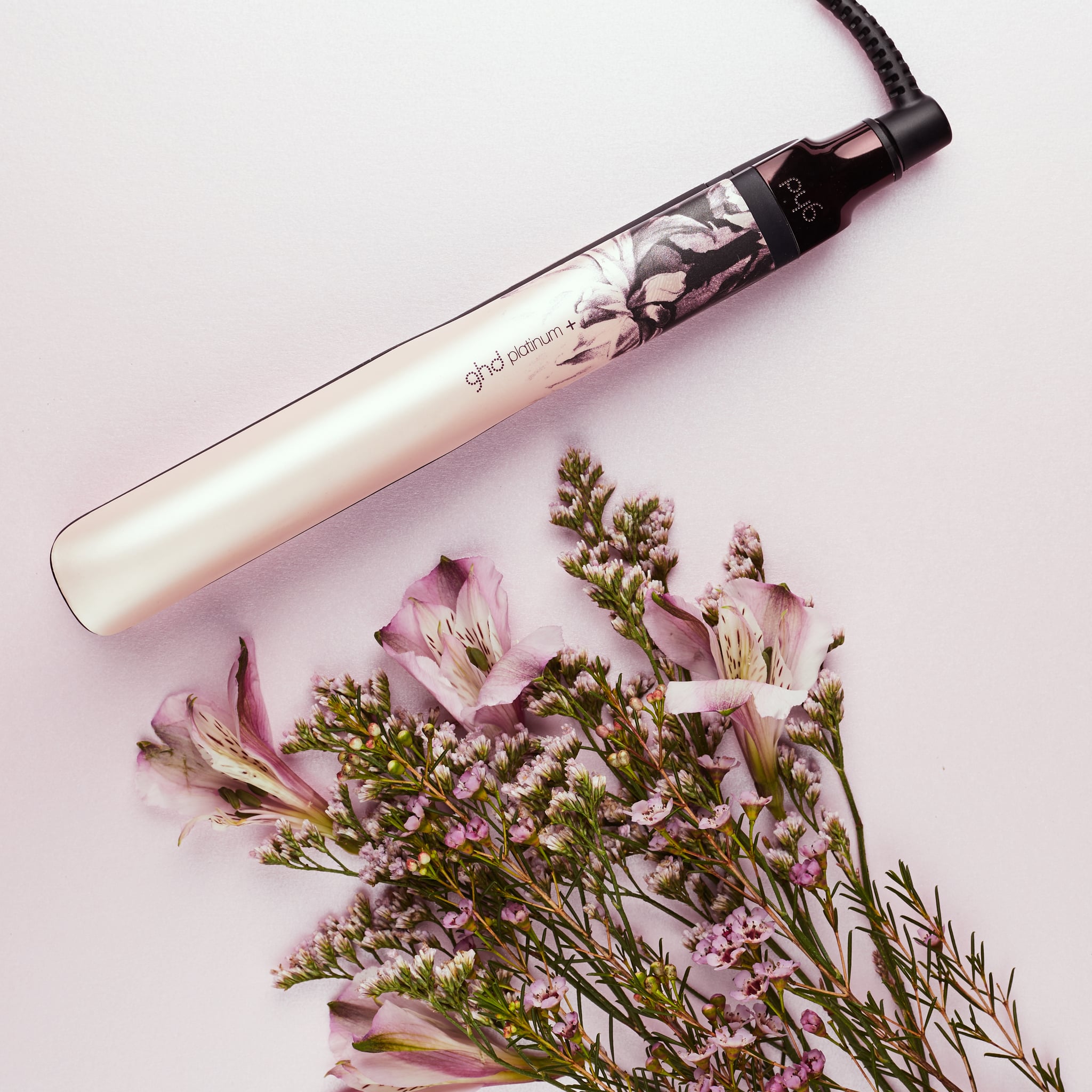 Allen's process is a mix of tattooing and graphic design. For each client, he comes up with a few design options. Then, using Photoshop, he superimposes the different options onto an image of the area of the body the person wants inked, allowing them to see what the final results will look like. It's actually the same way Allen worked when creating the tattoo-inspired design for the GHD collection — but instead of Photoshopping the different floral designs onto a photo of a body, it was on a photo of the straightener.

"I'm a cancer patient who's also a mother and who's also a daughter. Who just wants to share her story because I think it will help people."

Lombardo's eloquence in expressing both her emotions and experiences is what led Allen to suggest her to GHD as a model for the campaign. "When David introduced me to GHD I said, 'You have the wrong girl, I have horrible hair, you don't want me representing that,'" she said. "In this day and age you have to be careful with how we speak of femininity because we're not defined by our hair, we're not defined by our breasts, but individually, for me, I had always identified with my long, thick brown hair and to have it gone was terrible. But to have it grow back really different and not as good as before was like starting over." GHD, however, has a long history of supporting women recovering from post-treatment hair loss. In 2016, it launched the "You Are Not Defined by Your Hair" campaign along with Breast Cancer Now, which included styling tutorials for women post-chemo, an initiative that attracted both Allen and Lombardo to working with the brand. "GHD made it clear that [having good hair was] not what it was about for them," she added. "It was about telling my story so that it could resonate with millions of women around the world who have gone through this."

Before ending our interview, we wanted to know what it felt like for Lombardo to see herself in these huge photos that are currently decorating GHD's website and storefronts. "I see these pictures and it makes me giggle because I'm the farthest thing from a working professional model. But I'm really proud to be a real woman represented in a beauty campaign. I think there are a lot of beauty companies that try to do that and it's sometimes successful. But in this case, there's just no denying it. I'm a cancer patient who's also a mother and who's also a daughter. Who just wants to share her story because I think it will help people. And I got to get fancy hair and professional makeup in the process, which was really thrilling. So yes, it makes no sense when I see these images, but it makes me really proud at the same time."

Simone Biles
This Picture of Simone Biles's Red, White, and Blue Floor-Length Braid Deserves to Be Framed
by Jessica Harrington 11 hours ago

Kylie Jenner
It's So Hot Out, Kylie Jenner's Orange Deep French Manicure Is Dripping — Literally
by Jessica Harrington 1 day ago

Beauty News
Tia Mowry's Famous Friends Are Swooning Over Her New Blond Hair and Bangs, and So Are We
by Victoria Messina 1 day ago