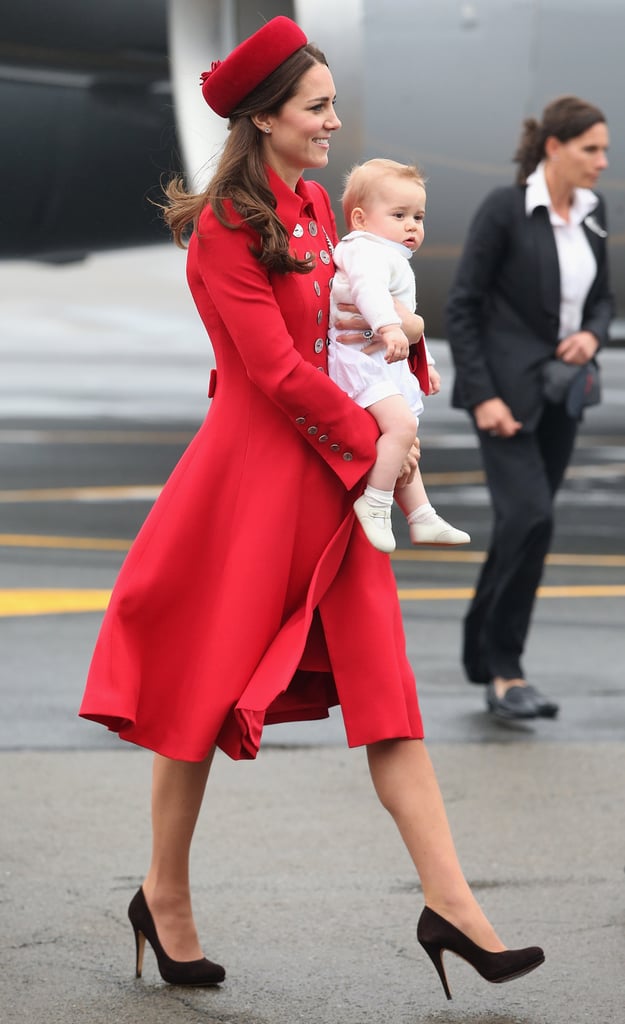 Kate Middleton made a grand entrance in New Zealand on Monday, stepping off a New Zealand Airforce Plane at the Wellington Military Terminal in a bright red Catherine Walker coat and Gina Foster hat with adorable Prince George in her arms. George wore an ivory ensemble for the big moment, which happened just hours after the family transferred aircraft during a stop in Sydney, Australia earlier this morning. During the pitstop, Prince William held their belongings — including George's cute Save the Koala bag! Covered up in a dark blue knitted sweater and pants, George matched his dad, who suited up for the big occasion. Meanwhile, Kate donned a patterned dress and beige heels. Prior to landing in Sydney, the family traveled first class on a 25-hour commercial Quantas Airways flight from London accompanied by their staff, including George's nanny.

Today marks the beginning of George's first royal tour. After their welcoming ceremony in New Zealand on Monday, the family will rest before their first outing on Wednesday. They'll return to Australia on April 16, where they will embark on the second part of their three-week tour. In total, the royals will be seen at 45 events in 13 towns and cities, providing plenty of opportunities for the public to see 8-month-old George. Just last weekend, anticipation for the trip reached a fever pitch when the royals released an official portrait of George, showing him with his parents as they sat near a windowsill in their Kensington Palace apartment. As you await more adorable moments in the coming weeks, check out the George photo ops we're hoping for, inspired by William's first royal trip Down Under as a baby, and get all the details about their packed schedule!

Celebrity Couples
OK, Seriously, Is It Possible For Zendaya and Tom Holland to Be Any Cuter Around Each Other?!
by Njera Perkins 1 hour ago