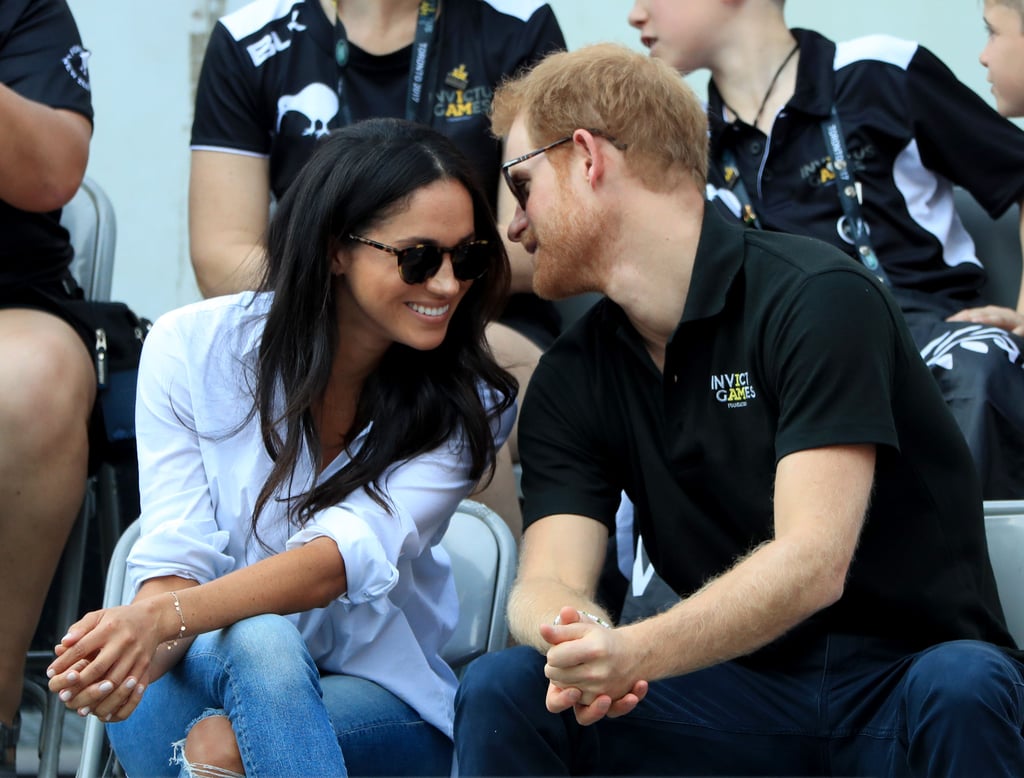 Prince Harry and Meghan Markle hit a major milestone in their yearlong relationship at the Invictus Games on Saturday when they made their first public appearance as a couple. During the annual sporting event's opening ceremony in Toronto, Meghan was spotted in the stands with Soho House director Markus Anderson while Harry, who took the stage to introduce the games, had to sit a few rows away with First Lady Melania Trump, whom he met at a photocall earlier that day. Even though we didn't get to see them together together, it's still a huge deal — and how cute did Meghan look in her purple dress and leather jacket? On Monday, the couple arrived hand in hand for the wheelchair tennis event; they both kept it casual in jeans and were all smiles while chatting in their seats and cheering on the participants. They also made sure to mingle with other audience members in between sets.

Related:
Everything There Is to Know About Prince Harry and Meghan Markle's Royal Relationship

The outing marks the first time we've gotten a glimpse of Meghan and Harry in an official capacity since they began quietly dating in May 2016. It was actually during Harry's visit to Canada to launch this year's games that he and Meghan first met, as she was in Toronto filming her USA series Suits. Since then, the couple has enjoyed low-key dates across the pond, attended a wedding together, and taken a romantic safari trip — and most recently, it was reported that Harry had introduced the 36-year-old actress to his grandmother Queen Elizabeth II during a weekend in Balmoral, Scotland. The rush of exciting events has many people waiting with bated breath for a royal engagement. Until then, scroll through to see Meghan and Harry's adorable appearance at the Invictus Games.