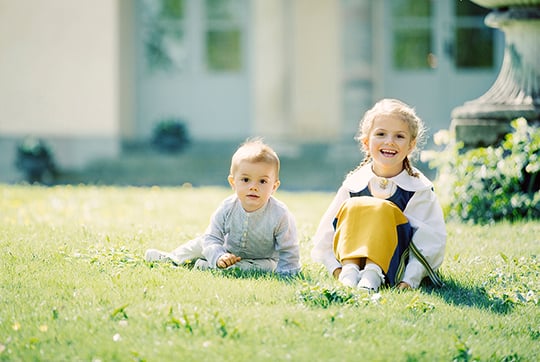 Tuesday marked National Day in Sweden, and the royal family celebrated by releasing two precious portraits of Princess Estelle, 5, and Prince Oscar, 1. The daughter of Princess Victoria and Prince Daniel is pictured wearing a traditional Swedish dress, while her little brother is shown in a striped shirt and light-colored pants. Both photos were taken on the grounds of Haga Palace, where the kids live with their parents. Back in April, we caught another adorable glimpse of Estelle and Oscar during King Carl XVI Gustaf's 71st birthday. Even though it was the king's big day, it was his grandchildren who stole the spotlight with their cute antics. Hopefully we'll get to see more of the royal family in the months to come.

Celebrity Instagrams
Katy Perry and Orlando Bloom Revealed the Gender of Their First Child: "It's a Girl!"
by Chanel Vargas 4 days ago

Steph Curry
See Steph Curry's Baby "Work Out" in Their Home Gym: "Questionable Form but We Will Take It"
by Chanel Vargas 6 days ago

Celebrity Instagrams
Shawn Johnson's Husband Got a Haircut, and Their Baby Girl's Reaction Has Me Smiling So Big
by Chanel Vargas 1 week ago