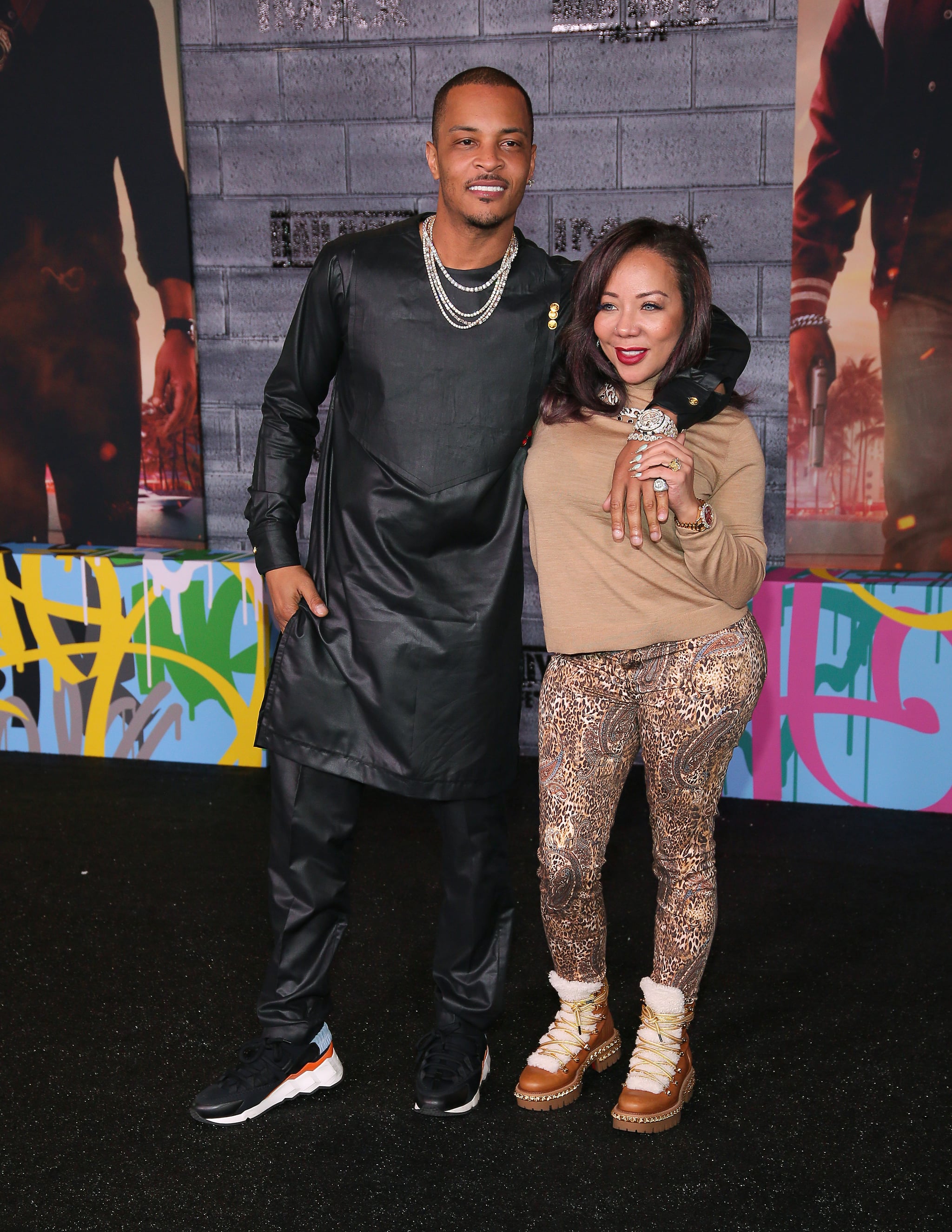 Accusations against rapper T.I. and Tiny (legal names Clifford and Tameka Harris) are continuing to come to light, with the LAPD opening an investigation of the Harrises in the most recent update. It all stems from allegations that the couple have habitually engaged in abusive behaviors, including drugging, kidnapping, and sexual assault. As new details continue to emerge, here's a thorough timeline of what we know so far.

Peterson, a former friend of the couple, took to Instagram to reveal her accusations against T.I., accusing him of holding her at gunpoint in front of children. "@troubleman31 you PUT A GUN TO MY HEAD IN FRONT OF CHILDREN & I NEVER CALLED THE POLICE ON YOU! But for years you have painted me as the VILLAIN!" she wrote in part. In the comments, she claimed that T.I. put the gun to her head during an altercation with his assistant.

In response, Tiny went into the comments to defend her husband; the Instagram account for The Shade Room captured the screenshot. "Hold up... So you want your abuser to train your sons? He was just uncle 2 years ago Now when did you say my husband assaulted you? Did you change your mind or change it back? What wit you today Pooh? I'm confused," she wrote. "Stop Harassing My Family. You strange. Everybody know you been special ... Please get help but LEAVE US ALONE."

Following her initial accusations, Peterson posted a series of screenshots, allegedly DMs from women who accused the couple of sexual abuse, forcing women to take drugs, and more, according to E! News. In response, the couple's representative issued a statement: "Mr. and Mrs. Harris want to be on record and more importantly want the public to know they emphatically deny in the strongest way possible the egregiously appalling allegations being made against them by Sabrina Peterson. The Harrises have had difficulty with this woman for well over a decade. They are taking this matter very seriously, and if these allegations don't end, they will take appropriate legal action."

On Feb. 5, Deadline reported that production on the fourth season of the reality show T.I. & Tiny: Friends & Family Hustle was being put on hold indefinitely due to the allegations. "We are aware of the allegations, and while they are not connected to our show, we have reached out to T.I. and Tameka Harris, as well as local and state officials," an MTV Entertainment spokesperson said in a statement. "Given the serious nature of the allegations, we have decided to suspend production in order to gather more information."

Blackburn held a press conference stating that his firm is representing 11 accusers, according to Deadline, and has been contacted by more than 30. In a letter to California Attorney General Xavier Becerra, Blackburn said, "the various events of interest span fifteen years and have occurred in California — especially in the city of Los Angeles and the states of Georgia and Florida." One woman, who identifies herself as an old friend of Tiny's from Atlanta, is mentioned as both a victim of drugging and sexual assault, as well as a witness who "has personally witnessed women complaining of being kidnapped and held against their will for days at a time."

In response, the couple's attorney released a statement, also reported by Deadline. "Clifford (T.I.) and Tameka Harris deny in the strongest possible terms these unsubstantiated and baseless allegations. We are confident that if these claims are thoroughly and fairly investigated, no charges will be forthcoming. These allegations are nothing more than the continuation of a sordid shakedown campaign that began on social media. The Harrises implore everyone not to be taken in by these obvious attempts to manipulate the press and misuse the justice system."

In addition to the pending criminal case, the Harrises and former family friend Shekinah Jones are facing charges of defamation following the Instagram exchange with Sabrina Peterson. According to The Hollywood Reporter, Peterson alleges she was harassed as a result of Tiny's response to Peterson's claim that T.I put a gun to her head. An attorney for the Harrises called Peterson's claims "meritless."

On May 17, People confirmed that T.I. and Tiny Harris are being investigated by the Los Angeles Police Department for alleged sexual assault. A spokesperson for the LAPD said that the "investigation is ongoing." The investigation comes after two women filed police reports — one was filed with the LAPD and the other was filed with the Las Vegas Metropolitan Police Department — alleging they were drugged and sexually assaulted by T.I. and Tiny Harris.

Shortly after the investigation was opened, Steve Sadow, an attorney for T.I. and Tiny, released a statement on the couple's behalf. "The Harrises have not spoken to or been contacted by the Los Angeles Police Department (LAPD), the Las Vegas Police Department (LVPD) or, indeed, any member of law enforcement from any other jurisdiction in the country," the statement read. "Even assuming the story in the Daily Beast is close to accurate, it appears the LAPD 'accuser' has chosen once again to remain anonymous, thereby preventing us from being in a position to disprove or refute her allegations — or even examine them. Meanwhile, although we now appear for the first time to have the name of an 'accuser' who supposedly filed a police report with LVPD, we have absolutely zero details about her or her claim."