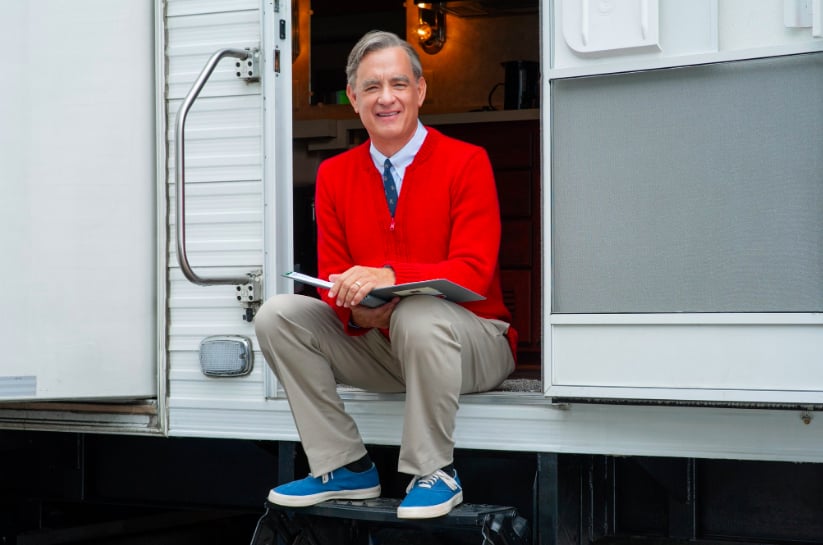 Can you imagine a better actor to play Fred Rogers than Tom Hanks? The two-time Oscar winner and Certified Nice Guy™ is set to portray the iconic Mister Rogers in an upcoming biopic, which now officially has the perfect title: A Beautiful Day in the Neighborhood. Although Hanks' casting was announced all the way back in January 2018, the name of the film and the exact plot had yet to be revealed. Fortunately, along with the title, Sony has also shared a rough description of the story and the actors who will be bringing Rogers and all his special friends to life on the big screen.

The film is being described as "a timely story of kindness triumphing over cynicism," and will be based on the true story of a real-life friendship between Rogers and journalist Tom Junod. The "jaded magazine writer" — played by Emmy award-winning star of The Americans Matthew Rhys — finds himself assigned to profile Rogers, the least jaded human being of all time. As Junod gets closer to the Mister Rogers' Neighborhood star, his skepticism begins to thaw and he learns important lessons about empathy, kindness, and decency from "America's most beloved neighbor."

The film will be directed by Marielle Heller, and is directly inspired by Junod's real-life article "Can You Say. . . Hero?" While speaking to Variety in January 2018, Heller said that Rogers' persevering kindness has been a personal inspiration to her, and she thinks the film is much needed considering the current social climate: "This is the perfect alchemy of talent coming together at the perfect time to remind us all of the transformative power of kindness and respect to heal and to unite."

Joining Hanks and Rhys is This Is Us alum Susan Kelechi Watson and 11.22.63's Chris Cooper. A Beautiful Day in the Neighborhood will hit theaters on Oct. 18th, 2019, so make sure you start stocking up on tissues now.