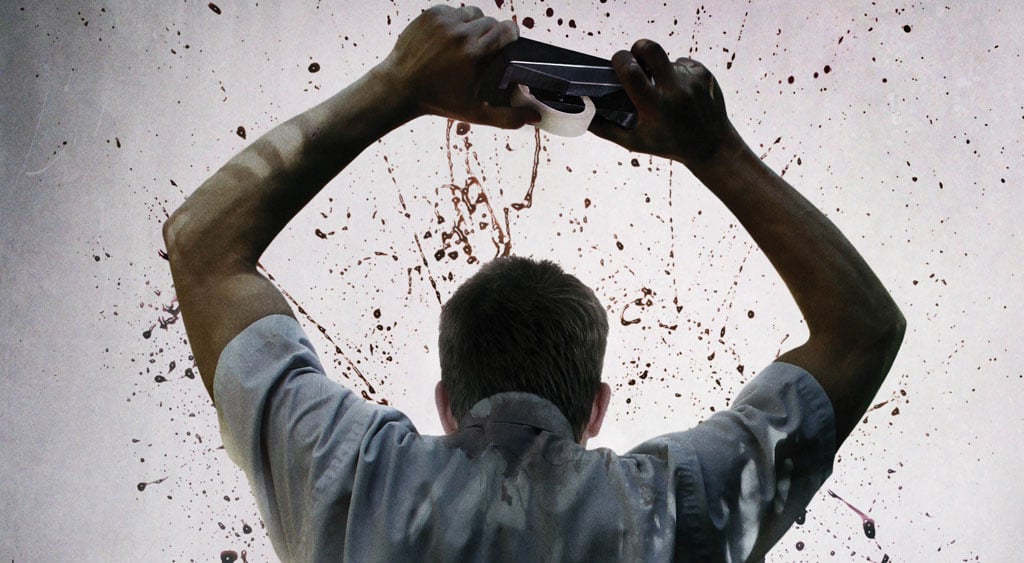 Spoilers for The Belko Experiment below.

The Belko Experiment first popped up on our radar with its graphic, gory trailer, and we can confirm that the movie is just as brutally horrifying as promised. The long-simmering project written by Guardians of the Galaxy's James Gunn draws heavy inspiration from director Kinji Fukasaku's Battle Royale, but its lack of profundity or satire (or rather, enough satire) makes it a truly grueling hour and a half to endure. If you'd rather skip 90 minutes of exploding heads and Tony Goldwyn acting less like President Fitzgerald Grant and more like Carl Bruner (classic Ghost reference), we're here to break it down for you.

So What's the Deal?

Belko Industries employee Mike Milch (John Gallagher Jr., who deserves better than this) arrives at his remote office building in rural Bogotá, Colombia, only to see a new fleet of security guards turning all the local non-English-speaking Colombians away at the gate. He — like girlfriend Leandra (Adria Arjona), boss Barry (Goldwyn), and everyone else at the vaguely defined nonprofit — has been there for a little over a year. It's new employee Dany's (Melonie Diaz) first day on the job, and it's explained to her that every Belko employee is implanted with a tracker at the back of their skull, just in case they're ever kidnapped.

With the local staff gone, the 80 employees left at the office go about their day as usual, but before long, armored, impenetrable metal walls and doors cover the building, locking them in. A mysterious voice comes on the intercom to announce that they need to kill two of their fellow employees or people will start being killed randomly. They assume it's some kind of prank and largely ignore the instructions, which results in a few peoples' heads exploding throughout the building thanks to the bombs inside their trackers. The remaining employees think it's from sniper fire at first, but Mike figures out what's causing the explosions and locks himself in the bathroom to try to cut out his tracker with a box cutter. The voice immediately comes back and tells him he has 10 seconds to stop, otherwise they'll kill him, too.

From there, the group is told that if they don't kill 30 employees within the next two hours, the voice will kill 60 of them. This splits the group into two factions; one led by Mike and one by Barry. Mike doesn't think they should kill anyone, because it's 1.) horrific, and 2.) does anyone really think the voice will let people survive this after what they've seen? Barry, under the guise of needing to survive so he can provide for his family, brings a handful of men over to his side, saying they need to follow the rules and kill 30 people for the sake of the rest of the group. Mike, Leandra, and the rest of their group attempt to hang big banners over the side of the building to catch the attention of people driving by, but soldiers with machine guns outside start shooting and the plan is abandoned. Unfortunately, Barry and his group get their hands on a stash of guns and order everyone down to the lobby to decide who is going to die.

Barry, with the help of his psychotic, perverted henchman Wendell (John C. McGinley), rounds up a group of 30 people to stand against a lobby wall (mostly the oldest employees, as well as the ones without children) and begins executing them. Thankfully, Dany (who's been hiding in the basement this whole time) cuts the lights before Mike is shot. People flee in all directions while Barry and Wendell continue to hunt them down, but the voice comes back on the intercom to announce only 29 people were murdered. Heads start exploding in every direction, leaving only a few of the group left. Once that culling is complete, the voice says that of the remaining group, whoever has the highest number of kills by the end of the day will be allowed to walk out of the building alive. Barry goes on an all-out killing spree while Leandra kills Wendell (who had been creepily hitting on her earlier). Stoner Marty (Sean Gunn) collects the un-exploded bombs from the heads of people who die in other ways in a napkin, which Mike puts in his pocket after Marty dies.

Leandra and Mike hide from Barry (the only other person left alive at this point) in a filing cabinet, but Leandra bleeds out from a gunshot wound in her chest. When she dies, it gives Mike — who had yet to resort to Barry's level of violence — the push he needs to attack Barry. He bashes Barry's brains in with a heavy tape dispenser. The metal barricades covering the windows and doors lift since Mike is the single remaining Belko employee, and he's escorted by soldiers out of the building to a warehouse next door. The Voice (Gregg Henry) introduces himself as a social scientist who believes researches need to see people in extreme environments to truly make discoveries about human nature.

They try to ask him a series of questions about how he feels and his emotional state, but Mike, furious and disbelieving, only cares about the large panel behind The Voice covered in switches that correspond to each one of the 80 Belko employees. It turns out Mike planted the leftover bombs on The Voice and the soldiers as he was being dragged into the warehouse, so he runs forward and flips all of the switches but his own. The soldiers and The Voice die, and Mike walks out into the sunlight, shocked. The camera pans out, revealing that Mike is actually being watched by another group who also has security footage monitors showing hundreds of other sole survivors of similar experiments.

Does That Mean a Sequel Is in the Works?

The ending, underwhelming and anticlimactic as it is, does set up The Belko Experiment for a second installment. Many of the actors pull out great performances despite stilted material and a bloated amount of unnecessary violence, so if Gunn can create a premise that's just as terrifying and thought-provoking but actually delivers, it could save a sequel from becoming straight-to-DVD fare. In an interview with Complex, the writer revealed he's "absolutely" open to the idea of a continuation of this story. "I have a very good idea about where Belko goes from here and how the experiment would continue and if we're lucky enough to make a few bucks and the audience would like to see a sequel," he said, "I think that would be something that we'd be very willing to give them."