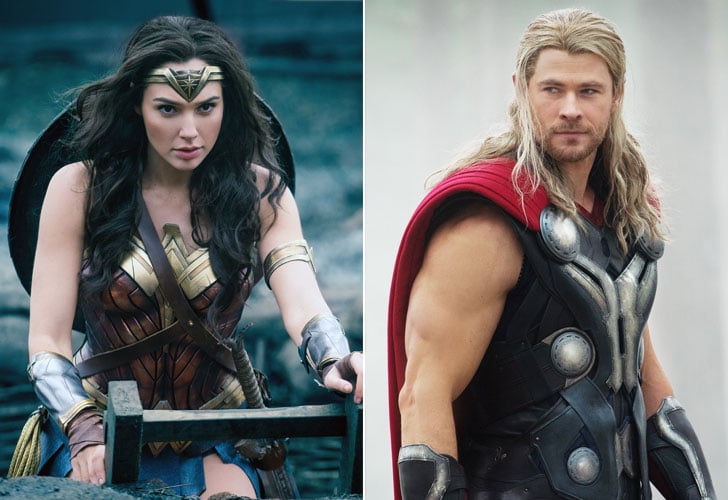 Wonder Woman has been the reigning badass at the box office since exploding into theaters on Friday, setting a record with its $100.5 million domestic opening (not to mention majorly inspiring women everywhere). Everyone from Lupita Nyong'o to Jessica Chastain has been giving the film, as well as director Patty Jenkins and star Gal Gadot, rave reviews, including none other than Thor himself (aka Chris Hemsworth).

While sitting down with Katie Couric for an interview with Yahoo News, Gadot was happy to discuss how the movie has become a symbol of female empowerment and said who she thinks would win in a fight between Thor and Diana Prince (Diana, duh). To ensure everything was fair, she asked Hemsworth what he thought via Couric's Twitter account, and it didn't take long for the Australian actor to reply.

Hey @chrishemsworth -- @GalGadot has something to ask you... #wonderwoman https://t.co/XWrDANhsaT pic.twitter.com/wDZDZpIemt

Although Thor is part of the Marvel universe and Wonder Woman falls under the DC umbrella, both characters are demigods (Thor is a god from Norse mythology, while Diana is the daughter of Zeus and Hippolyta) and would therefore be pretty evenly matched. Then again, anyone who saw Wonder Woman knows that Diana can take a punch (as well as give a ton of her own), so Thor and Mjölnir should count themselves lucky that they're safe and sound in the MCU.