Cobie Smulders's Sundance hit Unexpected is out for the Summer, and I had a chance to chat with Smulders about the indie, which follows her character, Samantha, through a surprise pregnancy. Coincidentally, Smulders was pregnant for the shoot, which had its benefits and its drawbacks, so we talked about the "belly dance," how this movie portrays an issue not often seen on the big screen, and what it was like to work with Workaholics' Anders Holm and newcomer Gail Bean as the student of her character who also gets pregnant at the same time. 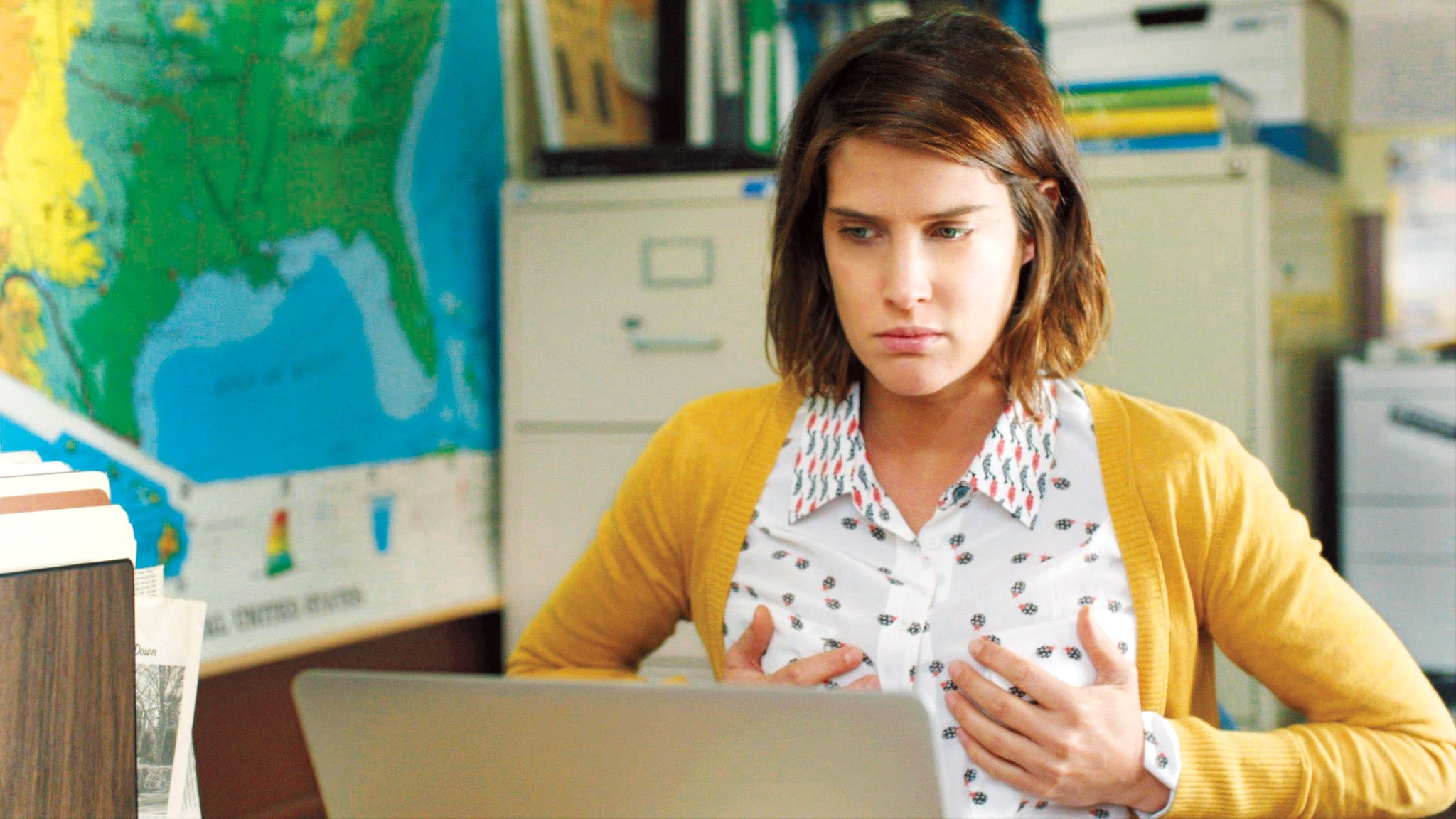 POPSUGAR: In Unexpected, your character, Samantha, is going through a pregnancy for the first time, but you yourself have already been through it. Were there elements that you pulled from your experience?

Cobie Smulders: Yeah, in fact Kris and I — Kris is the writer and director, Kris Swanberg — she and I did a lot of back and forth with putting our own experiences in and taking things out, [like] "that doesn't feel like that would really happen, a pregnant woman would say or feel this," and we really worked on the script a lot, because we really didn't have any rehearsal time. When I got to Chicago, we just started shooting, so that was really nice. So yes, there were definitely things that I experienced and that I added to the film.

PS: Were any of those the shock or the tears?
CS: Not necessarily; I think it was that those reactions were very specific to the character of Samantha, because she was so taken by surprise by this pregnancy, and I feel like her personality is to be in control, she likes to be in control. And so much of this, even when it happened, "oh, I am really pregnant," and when she gets the ultrasound for the first time, she sees it and is like "What!?" It's the first time she connects to it in some way, and a lot of her emotions are coming from the split of her wanting to stay at work and having this dream job sort of come at her, and then also planning to have this child.

PS: Kris was also a public school teacher, so how much of this comes out of her experience?
CS: Almost entirely, this is her experience. She was a teacher and she got pregnant — and I don't think it was by such a surprise — but she got pregnant, and one of her students got pregnant at the same time, and they are still really good friends to this day. I don't know if she went as far as like, "you've got to go to college and here are your options." I don't know if it was that, but I think the bones of it were the same.

PS: And while this situation is totally relatable, where every woman who works and gets pregnant has to decide to stay at home or keep working, but it's almost overshadowed and turned into a First World problem, when we get the situation with Jasmine and her pregnancy.
CS: It is sort of a First World problem, you're right when you say that, and with Samantha, this is a woman who doesn't really need to work because she has a husband who has a job. So it's more about the emotional, psychological feelings that she is having: If I am a stay at home mom, do I then lose my identity of who I was; who I have been for my whole life up until now? She has this feeling where, does she have to give up who she was because, I am a stay at home mom and I am with this child all day? It's a movie dealing with that stuff, which I don't think we have seen before. But one of the reasons that I did love the script and I do think that this movie is an interesting commentary on pregnancy in general, is that it is this woman who is going through these more emotional, psychological things, [and] at the same time there is this teenager whose life is being completely thrown upside down by this pregnancy, but the teenager is seemingly more emotionally ready and more willing to make it work and deal with it and be accepting of it than the adult is.

PS: Can you tell me about working with Gail [Bean, who plays Jasmine]?
CS: She is divine. I know she was very hard to find. She is young, she is 23, 22, when she came onto the movie. The funny thing about Gail — and also the character of Jasmine is similar in this way — is Gail feels like we're the same age. I don't know if it's [that] I am slightly immature or something, which I don't think I am, but she and I were on the same level constantly, and I felt like she was one of my girlfriends that I had grown up with or I hang out with, and then I realized that there is almost a 10-year difference here — that's like a generation gap. She is so wise beyond her years, she is so smart, and so committed to this character, and I think that that really came off on screen. And I don't think that it could have probably happened in terms of the Samantha/Jasmine characters, this relationship to form, if the student wasn't as mature as Jasmine was and if Gail had not brought that maturity level to that character. It would have been a different movie, like watching two girlfriends talk about their experiences.

PS: I want to talk about Anders Holm, because he's amazing on Workaholics, but it's really refreshing to see him playing a charming, regular dude. Did you know Anders before this movie?
CS: I feel like we are in a lot of the same circles, because we have mutual friends and stuff, [but] no I had not met him. I met him when I took him out for dinner in Venice, and we got along great right off the bat. Because I think it wasn't like, we were both going, and we were going to meet on set for the first time, so it was like, let's just have a dinner.

PS: It's such a rarity where the character and the leading lady are both actually pregnant. What happened first?
CS: First I was pregnant, and then the movie came to me, when I was deep in it. All I had to do was get pregnant to get this part, it was great.

PS: Did you have the reverse conversation that Samantha has when she has her job interview when she's pregnant?
CS: Yeah, exactly! "Actually, I'm gonna nail this job, because, 'boom!'" No, actually, I think, I'm sure Kris thought about it, and was like, ok; she didn't go, "you have the job," and I was like "Well, I'm pregnant." She knew that I was pregnant. Watching the film there are nice moments where you actually see a belly, and it's not like it looks terrible because it's fake. But I think shooting-wise, from a production standpoint, it probably slowed us down more than anything, because I still had to change the size of my body to fit our shooting day because it's an independent film. In the morning I was two months, and at lunch I was six, and at the end of the day, I was back down to two.

PS: So you didn't always have to wear a belly, but for certain scenes you did?
CS: Yeah, and then certain scenes I had to hide it. It was a dance, it was a belly dance.

PS: Did you learn anything about being pregnant or a mother while shooting?
CS: I think it's because it's a topic that for some reason we as women are scared to talk about, like we are afraid to say, "I don't know if I want to be a mom, but it is happening, so I just have to figure it out," and I think that that is sort of frowned upon. Listen, babies are a miracle and having kids is a wonderful thing, but it's a lot of work, and I think that it's hard to sort of talk about that. And I don't think that that has ever been voiced before. I don't think that I have ever seen a woman in a film, unless it's like a comedy, and they're like "I f*cking hate my kids" and bitching about it, but I haven't heard somebody go, "I don't know if I'm going to be good at this, I don't know if this is something I want." Because I think that it's hard. It's a conversation that is interesting and it's nice to put a movie like this out there to look at it from a different perspective, the female perspective of what is going on.

PS: I also love the perspective of the male character because he almost can't say anything right even though he's so sensitive.
CS: He's just being realistic and he's just telling the truth, and it's just something that she's not really wanting to hear. When we were on set, [Anders] was like, "God I'm such a jerk," and I'm like, but you're not, if you really listen to what you're saying, you're saying what is the truth, and it's just not something she wants to hear.

Anna Camp
Anna Camp on Filming Desperados, What She's Currently Binge-Watching on Netflix, and More
by Kelsie Gibson 1 day ago