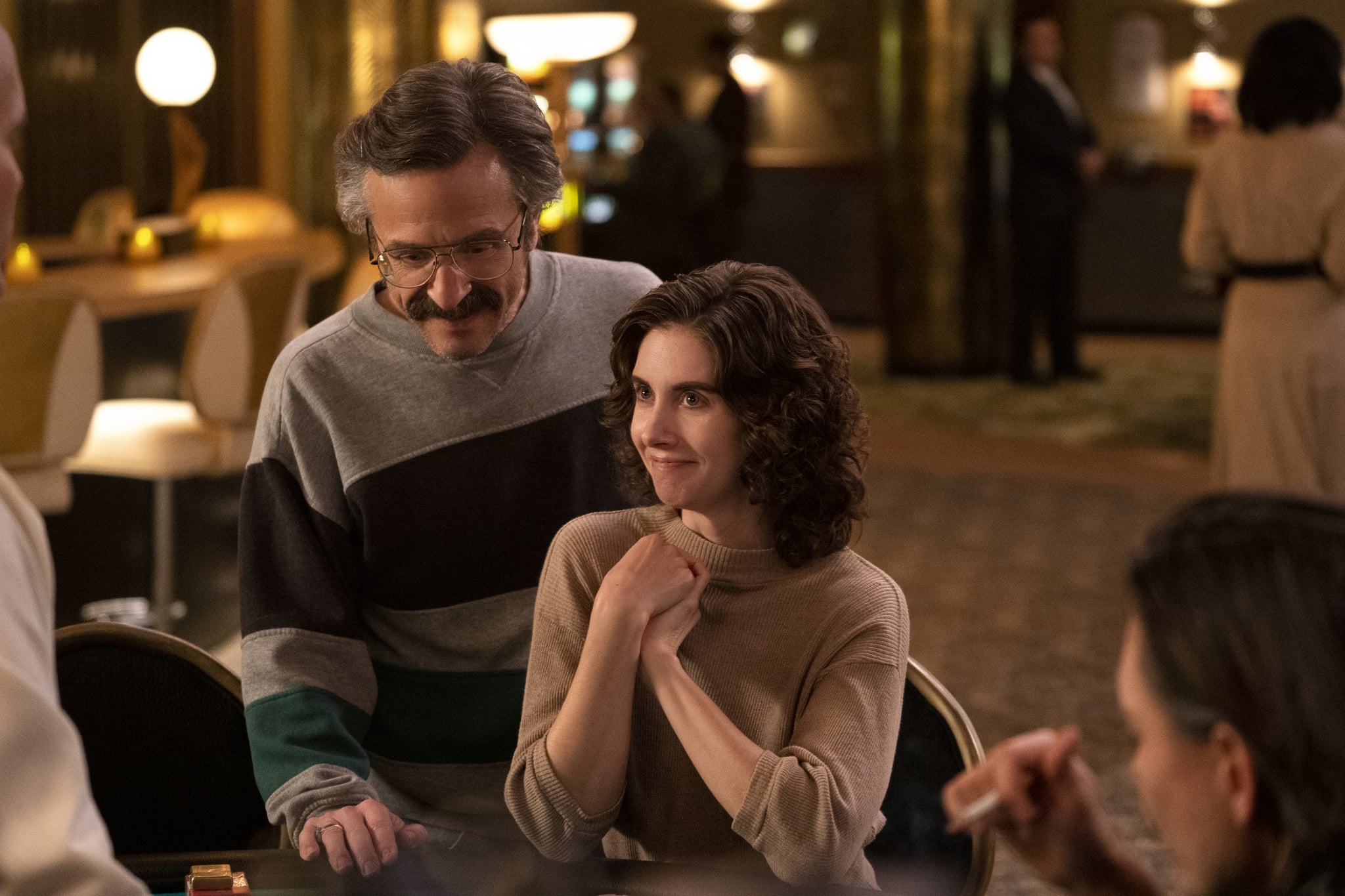 Warning: spoilers ahead for season three of GLOW ahead!

Let's cut to the chase: there's always been lingering sexual tension between Sam and Ruth (Marc Maron and Alison Brie) on Netflix's GLOW. In season three, they boldly admit their feelings for each other, but their chemistry fails to keep them together for long. Beforehand, they've assumed a fuzzy professional relationship — him the jaded director and her the plucky actress who might be better at his job than him. At the end of season two, the feelings in the air culminated in Sam awkwardly kissing Ruth at his kid's Winter formal. In the more overtly romantic and sexy third installment, the show takes their messy relationship head-on.

Ruth and Sam's Vegas escapades start out innocently in season three. After Sam teaches Ruth how to gamble at the casino, they spend a lovely dinner together where they hit it off talking about fillets, screenplays, and everything in between — he even loans her his watch. When they hop into a hot tub together, Sam confesses that he loves her. But Ruth's tentative. She's doing an LDR with Russell the camera operator. Plus, she voices reasonable concerns about Sam, pointing at his drug use, anger, and age — he's nearly twice as old as her. It's no surprise when their more-than-just-friends relationship cools down after this thorny exchange.

The awkwardness exacerbates when Russell drops by for a visit. Ruth overcompensates, perhaps, because of her feelings for Sam, buying her beau an expensive camera, trying out rings, and proposing that they move in together. She also mentions offhandedly that Sam let Sheila read his script instead of her. Awkward.

But Ruth has a moment of clarity while talking with Debbie on the ladies' hiking trip. She heads to Sam's hotel room to share her feelings, but it's too little too late. He's already gone, off to help his daughter Justine sell her screenplay after realizing he has no future with GLOW.

The said screenplay eventually brings Ruth back to Sam when he asks her to audition for Justine's movie months later — after, we should mention, his heart attack. When they meet up at a bar later, she finally admits to Sam that she loves him. They share a mutual kiss after seasons of buildup and plan on heading to his place to hook up. But Sam, trying to be a good guy, tells Ruth that she didn't get the role. Ruth storms off, upset.

I don't know if there will be a season four (knock on wood), but if this is the last we see of these folks, it feels right to finally address the tension and bookend their romance. As much as I love Marc Maron and Alison Brie, their characters not getting together might be for the best. We don't know how much longer Sam will have, given his heart condition. It's time for him to pursue his directing career and be present for Justine. And it's also time for Ruth to figure out where her career's going next after she parted ways with Debbie. Is it bittersweet? Sure. Balanced? As much as a soak in the Vegas hot tub will offset a bad day.