After singing on screen in Les Misérables and earning an Oscar for last year's The Theory of Everything, Eddie Redmayne has taken on his biggest challenge yet: telling the story of the first woman to undergo transgender surgery. He plays Lili Elbe in The Danish Girl, an adaptation of David Ebershoff's book of the same name. I got the chance to talk to Redmayne before the film's Nov. 27 release, and he's quite the charmer. Keep reading to find out why he would sooner make up an excuse than host Saturday Night Live and the interesting part of Lili's story that you won't see in the movie. 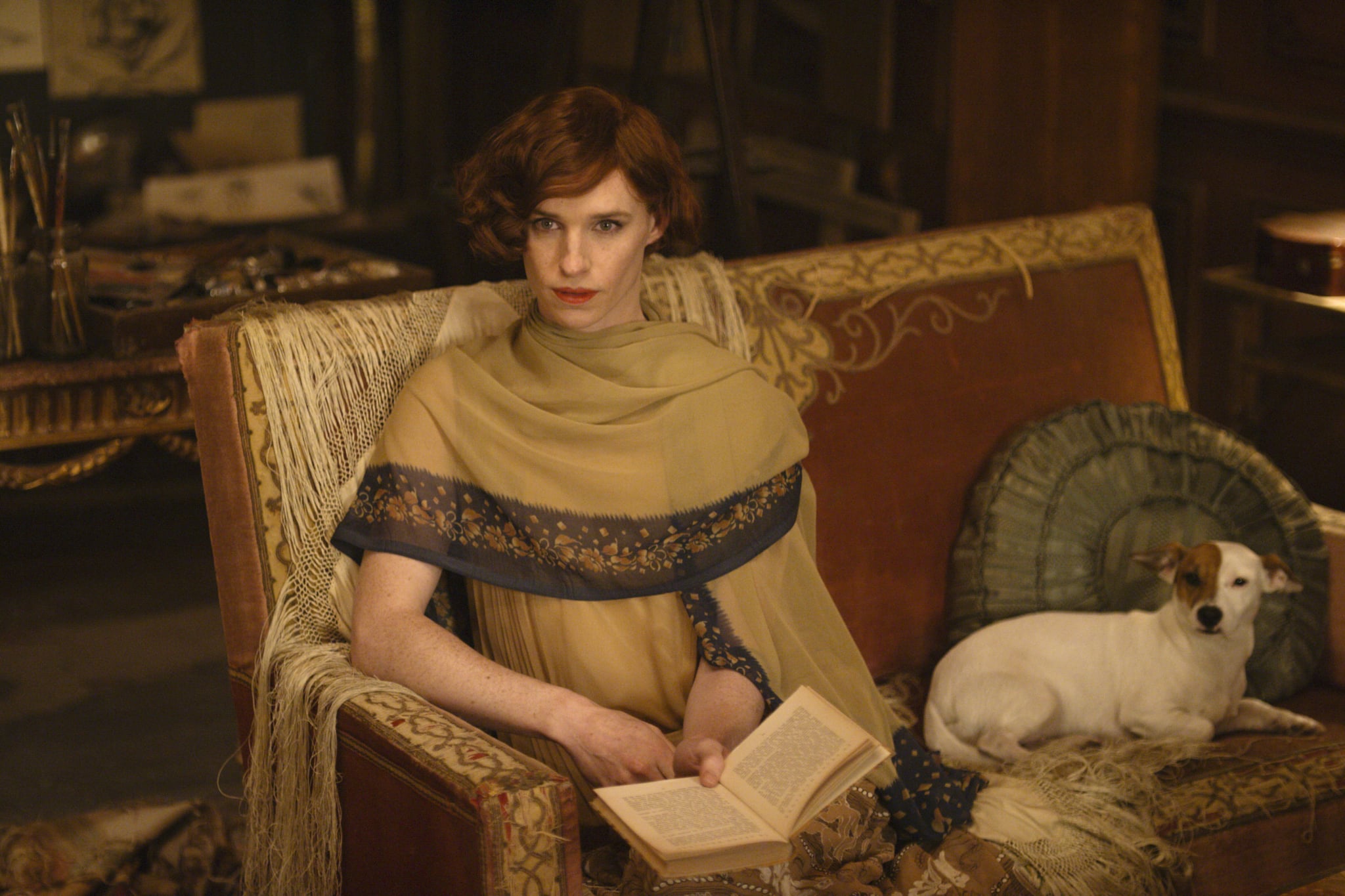 POPSUGAR: What is something you learned about the true story of The Danish Girl while working on the movie that you were surprised by?

Eddie Redmayne: Pretty much the entire experience of prepping the film was one gigantic education for me. I was cast in it three years ago, and from when I was cast to when the film got made, it was a massive education — specifically to the story itself. One of the things that is actually not in the film is that Lili got the royal blessing of her gender change in order to get a new passport, which was going all the way up to the ranks of the Danish royal family.

PS: Would you ever consider trying your hand at comedy?

ER: Oh my gosh. I'm gagging to do something funny, but I think I'm deeply unfunny, so I think it might well be a catastrophe. I'm all up for a bit of comedy, but for some reason no one ever asks me. That's probably because they know something I don't.

PS: It might be because you use phrases like "I'm gagging to do something funny." Is that a British phrase? I've never heard that.

ER: Oh, you've never heard that? Oh god. Oh sh*t, OK. Probably. I think it must be quite terrifying doing hardcore comedies because I always think of comedy as being spontaneous, and yet everything about filmmaking is not spontaneous. It's take, after take, after take. Surely, how brutal must it be doing those scenes again and again and just hearing the groans from the crew. I'm always really impressed with comedic actors who can nail it time and time again.

PS: Would it scare you having to ad lib like that?

ER: I quite like improvising. It was funny; we did quite a lot of it on The Theory of Everything actually. Felicity [Jones] and I improvised around the script occasionally and James [Marsh] — the director — would allow us freedom. But no, I think it's a great art being really good at improvising. I feel like there's more of a training in America. Emma Stone is amazing at improv. There's this whole thing with improvising, you're never meant to shut down; you're always meant to say "yes" to keep the conversation going.

ER: But she's brilliant at it.

PS: Have you ever met Emma Stone?

ER: Yeah, she's a pal. I'm always impressed. Like when she goes and does Saturday Night Live, she's brilliant at it. It's my worst nightmare. It'd be terrifying. Can you imagine? I've watched it so many times; I find it so extraordinary to watch, but the idea of actually doing it would be terrifying.

PS: Would you do it if they asked you, though?

ER: I think I would try and make up some really good excuse as to why I couldn't do it because I'm basically just too nervous. It's live! If you flunk, you flunk big time. There's so much potential for things to go wrong. I think it's too scary for me.

PS: The whole movie is an emotional roller coaster, but was there one scene in particular you were scared to film or that you had to psych yourself up for?

ER: I don't know about scared. I supposed the part of the movie I found the most challenging is the bit where Lili is at her least happy. I feel like it's actually transitioning, but being told that she has to stay in her male guise and when she feels like she's letting Gerda down, but at the same point having to fight that with being herself. That was an intense part of the film to shoot. The bit I enjoyed most is when she was at her most content in her skin, and that was a real joy to play.

PS: Did you listen to any music on the set to zone out and prepare?

ER: That's a great question. Do you know what? I actually didn't. This is a film that was quite a quiet film for me. I didn't actually have a soundtrack to it.

PS: Do you normally when you do movies?

PS: What other movie soundtracks — modern or otherwise — do you enjoy?

ER: Oh, god. The Goodfellas one I absolutely love. What else? The Godfather. All the classics, really. For the first time in my life I got a turntable, like a gramophone; we were given it as a wedding present by a friend, and I'm now beginning to stock up on proper old records.

ER: It's good, though. It feels like the actual band is locked away in a cupboard; they're playing live for you!

ER: One of the interesting things about the period of the film in the 1920s was it's a time when women's clothing was changing and it was becoming much more androgynous. It was less about curves and it was much more the flapper dress and quite straight angles. Similarly, women's haircuts were becoming shorter and more androgynous. It was interesting that this story took place at that time. One of the trans women I spoke to in preparing for the film she wears jogging pants and a baseball shirt; she described though how she would always wear her rucksack [her bag] on one shoulder in order to create a contrapposto to create a more feminine angle in her body. That was interesting to me about finding those curves when you don't have them on you physically. That was an interesting element for me.

PS: Have you received a lot of outreach from the trans community?

ER: Well, certainly in preparing for the film; I met many people from the community and they could not have been more generous. Every single woman I spoke to — pretty much across the board — would start the conversation by going, "There is no question I'm not willing to answer." The need for cisgender people [those who do not identify as transgender] to be educated on trans issues, to be allies to the trans community, feels so urgent. The generosity was kind of overwhelming for me. As an actor, of course, you play parts and you do films, but the bigger thing is life experience, and I feel really privileged in having played Lili and for meeting such brilliant people.

PS: Since the movie is based on the book by David Ebershoff, which is based on Lili Elbe's life, was there a challenge in balancing the material from the book with the actual true story? Because the book is not 100 percent true.

ER: There were many things for me. There's the history of Lili and Gerda's relationship. There is then Lili's book, Man Into Woman, which people question whether it was actually written by her or elements were changed or shifted — it's a sort of unreliable source. You then have David's book and then Lucinda's adaptation of David's book. Then for me, all the women that I met of different generations within the trans community and their experience. In the end what I tried to do — as well as the paintings and the photographs — was take all of that information and try to find a version of Lili's story in me with the acknowledgment that it's not a documentary piece of material.