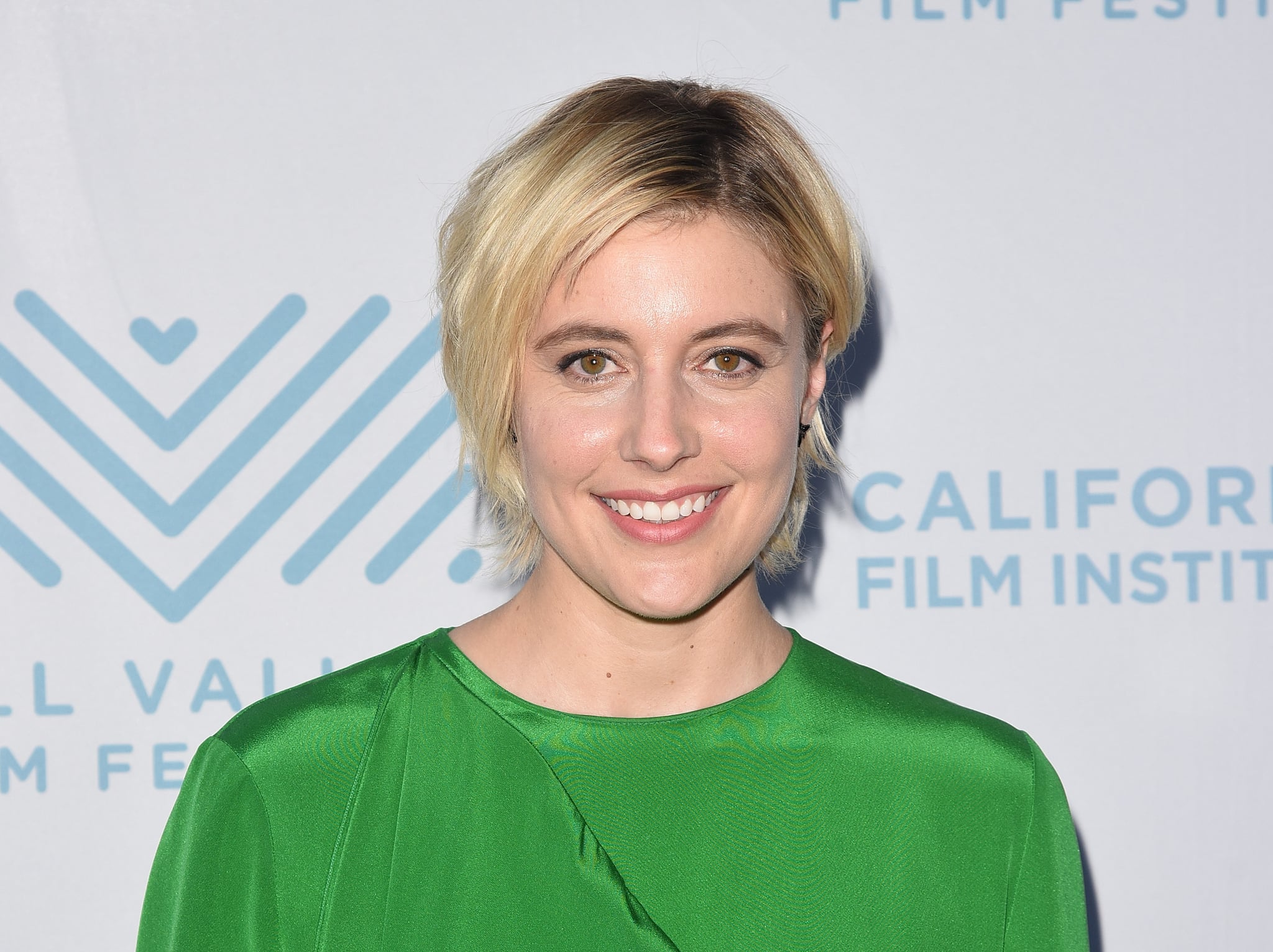 Lady Bird was written by Greta Gerwig, and it's also the first film the actor/filmmaker has directed, so it wouldn't be strange to assume it comes from her life. Giving the subject matter a closer look — the life of a teenage girl going to Catholic school in Sacramento, CA, and graduating in the year 2002 — you'd be more convinced it was based on her life, as she also grew up in Sacramento and graduated from Catholic school around the same time. However, the character called Lady Bird (played by Saoirse Ronan) isn't based on Gerwig, and, in fact, when I chatted with her about the film recently, she talked about how starkly different the real teenage Greta was from the film's lead character. Still, a lot of the film came from Gerwig's life and upbringing — keep reading to find out what, plus the reason you'll never find out what happens to Lady Bird after the credits roll.

POPSUGAR: You said nothing in this film has happened other than you also being from Sacramento, but I still wanted to know if there are similarities between you as an adolescent and Lady Bird.
Greta Gerwig: There are certainly things in the movie that are connected to me, but everything has been fictionalized and rearranged. My sister saw the movie and she immediately knows what's real and what's not real, and she can see all the little things that I took from someone and gave to someone else. When your family watches something, they know — my brother, my sister, my parents — they know what it is.

I think the truth is for me, I was not at all like Lady Bird. I never made anyone call me by a different name, I passed my drivers' test the very first time . . . I was much more of a rule follower, people-pleaser kind of kid. I really wanted the gold star, and it would devastate me if I didn't get it. In a way, writing the movie was like exorcising some id or demons or something I didn't have access to at the time, inventing the more untethered version of perhaps who I was, but it was not something I had access to at the time. It feels very personal to me, and it definitely has a core of truth that is very connected to me, even though it's not literally the events of my life and I was not like Lady Bird. 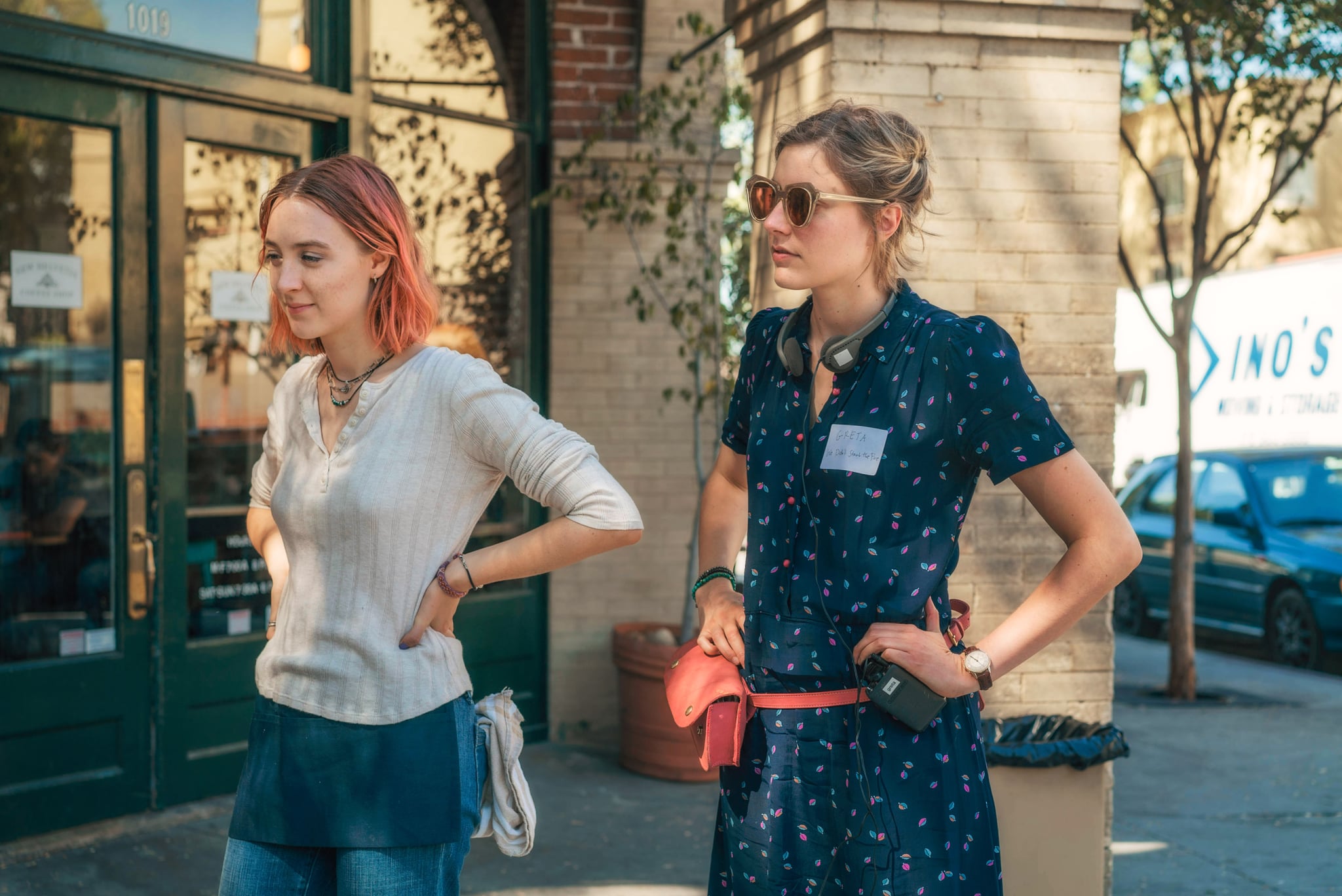 PS: Can you talk about the casting of Saiorse Ronan?
GG: I've always loved Saoirse as an actor, but I never had her in mind as I was writing, because I try to get the character right on the page. And also, she's Irish, so I didn't even think she'd want to do it or have a relationship to this movie, but then she read the script and she really loved it and had this deep connection to the story, and she really wanted to do it. 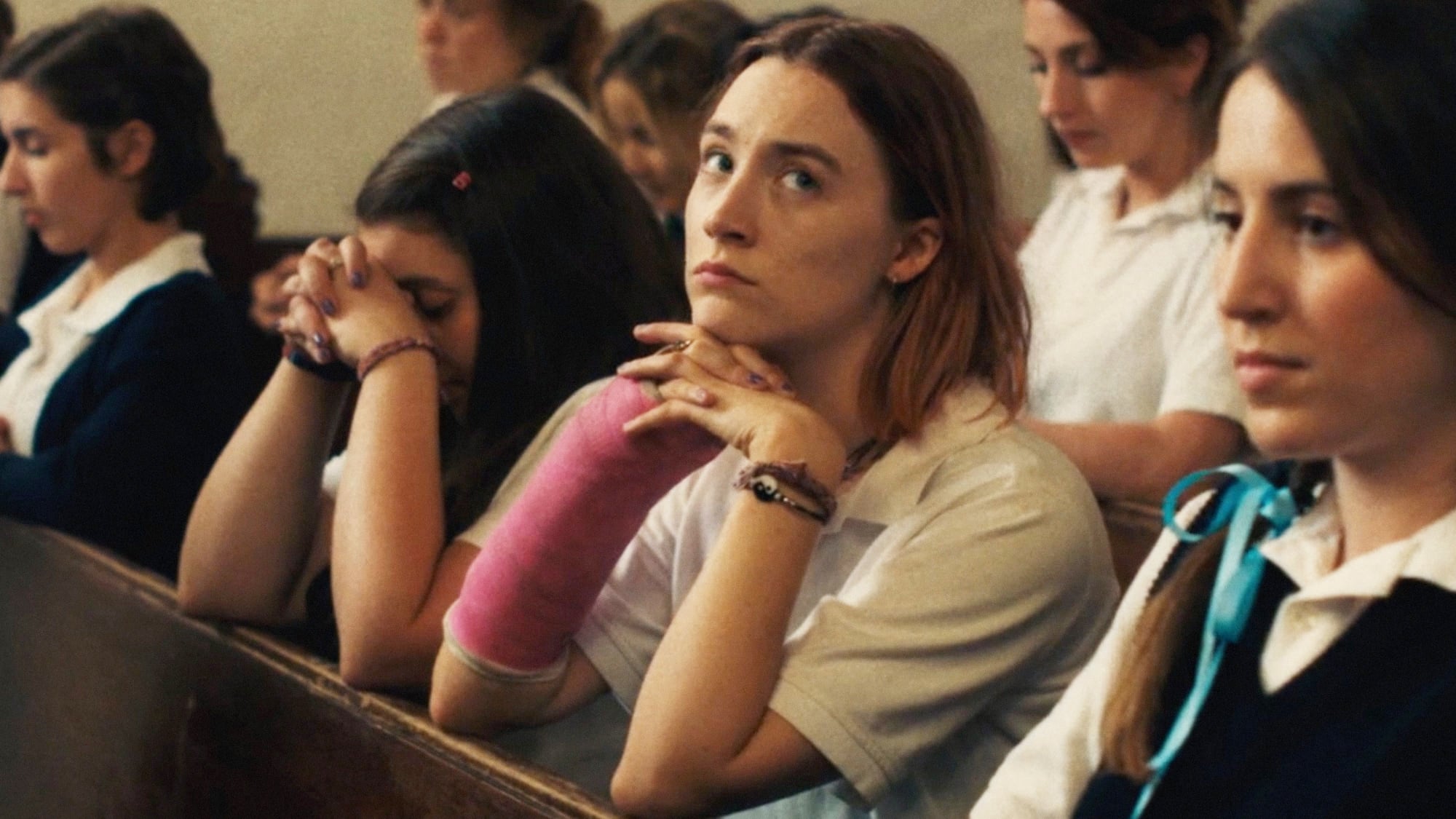 She's such a special combination of technical ability, because she's doing an accent. She doesn't look like Lady Bird; she created this whole walk and this physical life for this girl, which is separate from how she is. And also she's just totally alive in the moment; she's both things, both uncontrolled and completely technical, which is why she's one of the greats.

PS: Why did you pick 2003 as the year to set the movie in?
GG: 2002, 2003 was a little after I was in high school. I wanted to pick those years because I wanted it to be in a post-9/11 world, and I wanted it to be when were getting into the war in Iraq. It was 18 months after 9/11, and it felt like all these giant global events were happening. It was sort of a televised war, but not the way Vietnam had been, but [there were] these sort of reports on the shock and awe. I feel like in movies, everything is kept separate: personal lives over here and global events over there, and the truth is, it all goes together. You live through the moment you live through.

And also I wanted it in the moment before the internet took over everything. It was coming, but it wasn't quite there yet. You could still not have a cell phone. There was no Facebook. There was no Instagram, there was no Snapchat, and I think so much of how teenagers live their lives now is that way, and I just don't think it's that cinematic. So selfishly I just didn't want to shoot it.

PS: One of the more relatable themes is the hot and cold mother/daughter relationship and how the relationship is during your teen years.
GG: For me, that's the core love story of the movie. It's between this mother [played by Laurie Metcalf] and this daughter, and I think so often in movies you'll have mothers as either being portrayed as monsters or angels, and that's just not the truth. They're humans; they're just people. They make mistakes and they also do well sometimes, just as kids can be total brats and can be incredibly generous and insightful at times. And they're both. For me, that relationship between a mother and daughter, in particularly the teenage years, it's almost like something chemical happens where you just fight in this way. You're so similar, and you're being pulled apart, and I think that makes it more complicated. Because they know that they're losing you. So there's this intensity to it that's unlike anything else. 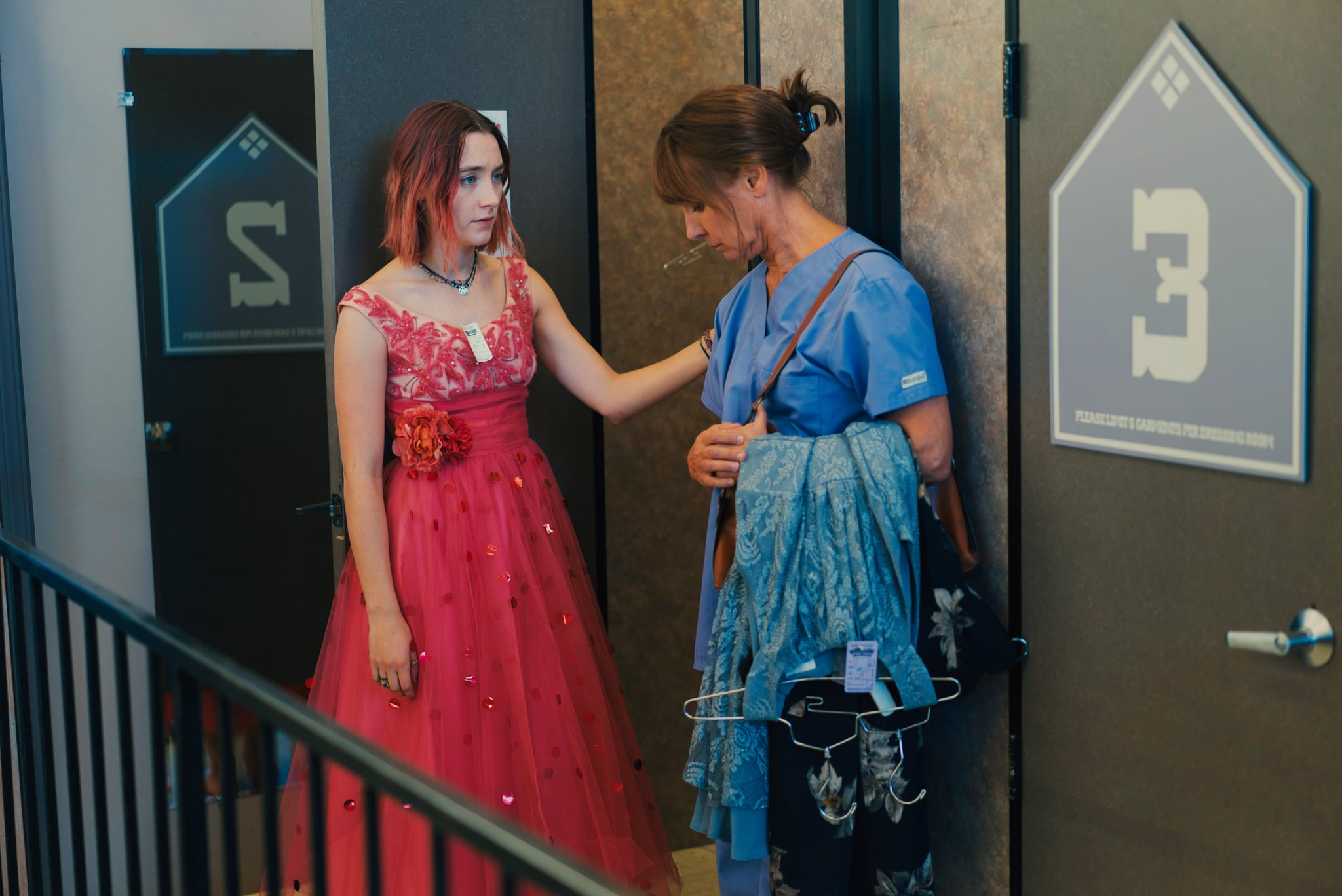 PS: The one thing I felt that was a little harsh were Marion's comments about how far her daughter could go in life. Did you worry you'd make Marion a little too negative?
GG: No — I don't pull any punches with either of them. Lady Bird's a bit of a d*ck at times, and I wanted her to have an equal sparring partner. My goal the whole time was: I know where that mother's coming from, and I know where that daughter's coming from. They go at each other so hard, but it's because they're two sides of the same coin.

PS: Lady Bird would be 33 now; what would you envision for her life now?
GG: I don't really do that with characters; something I like about films is that they are finite. We only get these people for this amount of time, because that's the story I need to tell. The movie ends on her taking in a breath and then it cuts to black, because to me when she breathes out, that's a new story. And it's a story I'm not going to tell.

I think there's a certain sadness that films have this container and that they don't go on forever. Because you think, that's all we get of these characters. I used to remember when I would watch movies that I loved when I was a teenager; it would kill me when they ended, because I was like, "Wait! Isn't there more?" One of my favorite movies — so romantic — was Good Will Hunting, and when it ends you're like, he's going to California to get her! Why can't we go to California with him?! What's that gonna be like? Are they gonna be happy? And you're like, that wasn't this movie. The whole point of this movie is to get him to the place where he can go get his girl in California. That feeling of "but I want to know how it turns out." To me, to end on that note — it's that ache of you don't know.