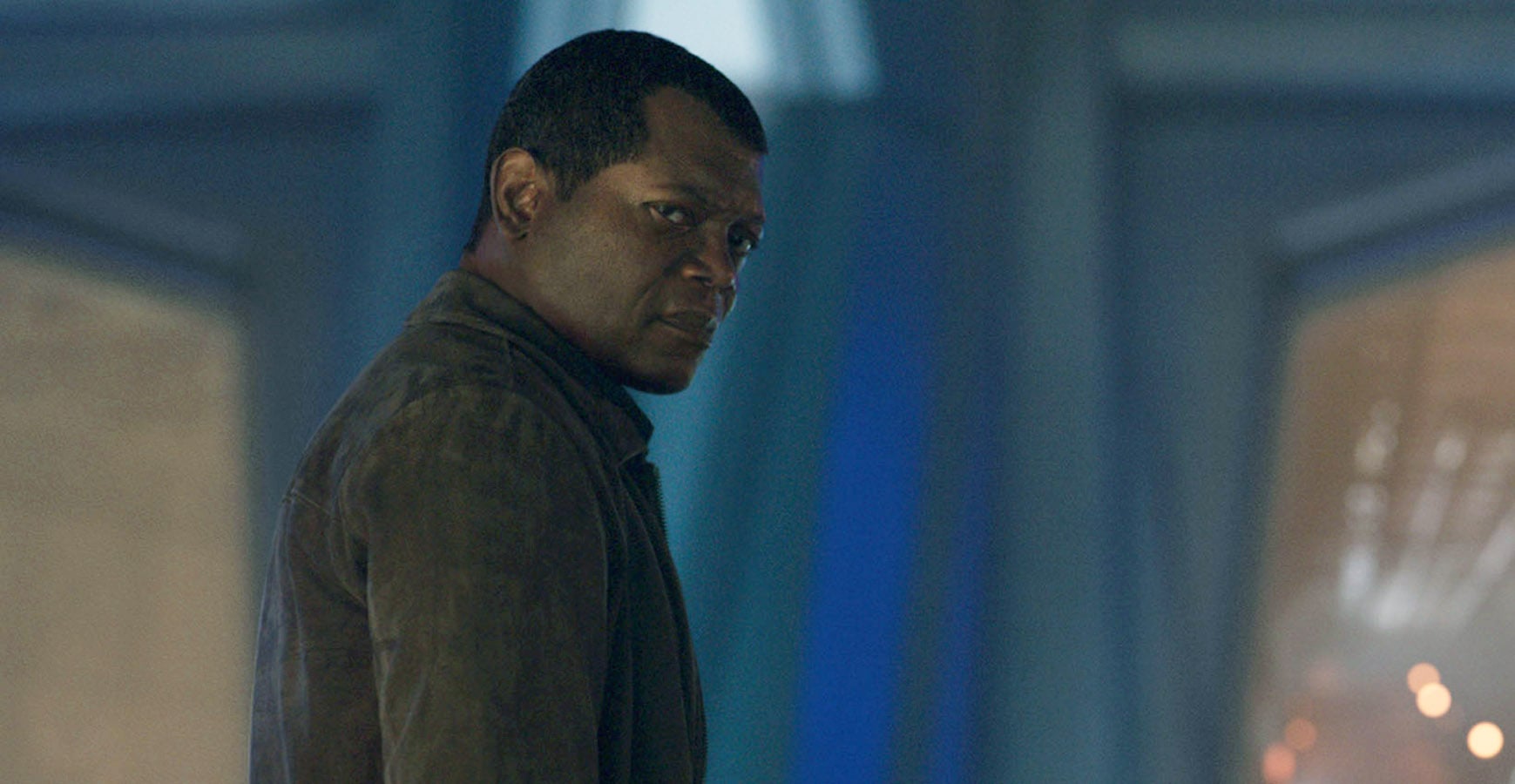 You might sit down to watch Captain Marvel and think you're going to see a movie all about ass-kicking human turned ass-kicking alien Carol Danvers (Brie Larson) and how she learns to fully embrace her jaw-dropping powers, but the true heart of the film is actually a love story — a love story between one Nick Fury (Samuel L. Jackson) and Goose the "cat." But theirs is a tragic love story, one that ends with Fury losing an eye. So, you know, not exactly ideal.

Not long after Carol, a Kree alien, crash-lands on earth and begins investigating the scientist who an enemy alien race, the Skrulls, are after, she bumps into blossoming S.H.I.E.L.D. agent Nick Fury. Although they don't exactly get along at first — he sees her as a Blockbuster-ruining criminal dressed to play laser tag, to be fair — they eventually become thick as thieves, helping each other out of sticky situations as they come to realize the full scope of how the Kree-Skrull war has affected both sides, as well as the truth behind Carol's origins.

But anyway — back to Goose.

The scientist that Carol is investigating is actually her former Air Force commander (Annette Bening), whom she doesn't recognize at first since her memories were wiped upon becoming an alien six years earlier. As she looks into the woman's past, she has memory flashes of the woman having a cat that was fond of Carol. She meets the same cat, Goose, when she goes to a government facility with Fury to find files about the scientist, which is where Fury and Goose's love affair is born.

Fury can't help but stoop down and immediately cuddle with and compliment Goose, who takes an instant liking to him.

A few scenes later, in the facility's file room, we discover that Carol's Air Force superior wasn't actually human but an undercover Kree named Mar-Vell. Oh, and her former pet, Goose, isn't actually a house cat, but a Flerken, aka an alien race that presents as an average-looking tabby. But Flerkens actually have a myriad of incredibly long (and strong) tentacles that can extend from their mouths, which have the power to incapacitate full-grown soldiers.

Despite knowing that a terrifying intergalactic beast is housed within his insanely cute exterior, Fury gets on great with Goose, who only ever chooses to sick his tentacles on the bad guys. But toward the end of the film, after a few stressful fight scenes, Fury holds up Goose in front of his face to coo at him. That's when Goose decides to let his annoyance at being held be known by swatting Fury across his left eye — something my own cat has attempted to do to me on more than one occasion.

Fortunately my cat doesn't have the kind of bacteria in her claws that, when it comes in contact with a human eye, will result in a serious, incurable infection. The same can't be said of Goose, whose split-second scratch ends up being the reason Fury loses his eye a few days later. But Goose and Fury's love runs deep, because the S.H.I.E.L.D. agent still adopts the little troublemaker, even putting a cat bed in his office so Goose can come to work with him. Rather than select one of the many glass eyes that a young Phil Coulson presents him with in his office, Fury decides to rock an eye patch instead.

At first, I found myself surprised at how remarkably chill he is about the fact an alien furball took out his eye, but then I remembered Goose's face and it all made sense. Thanks for the history lesson, Captain Marvel!