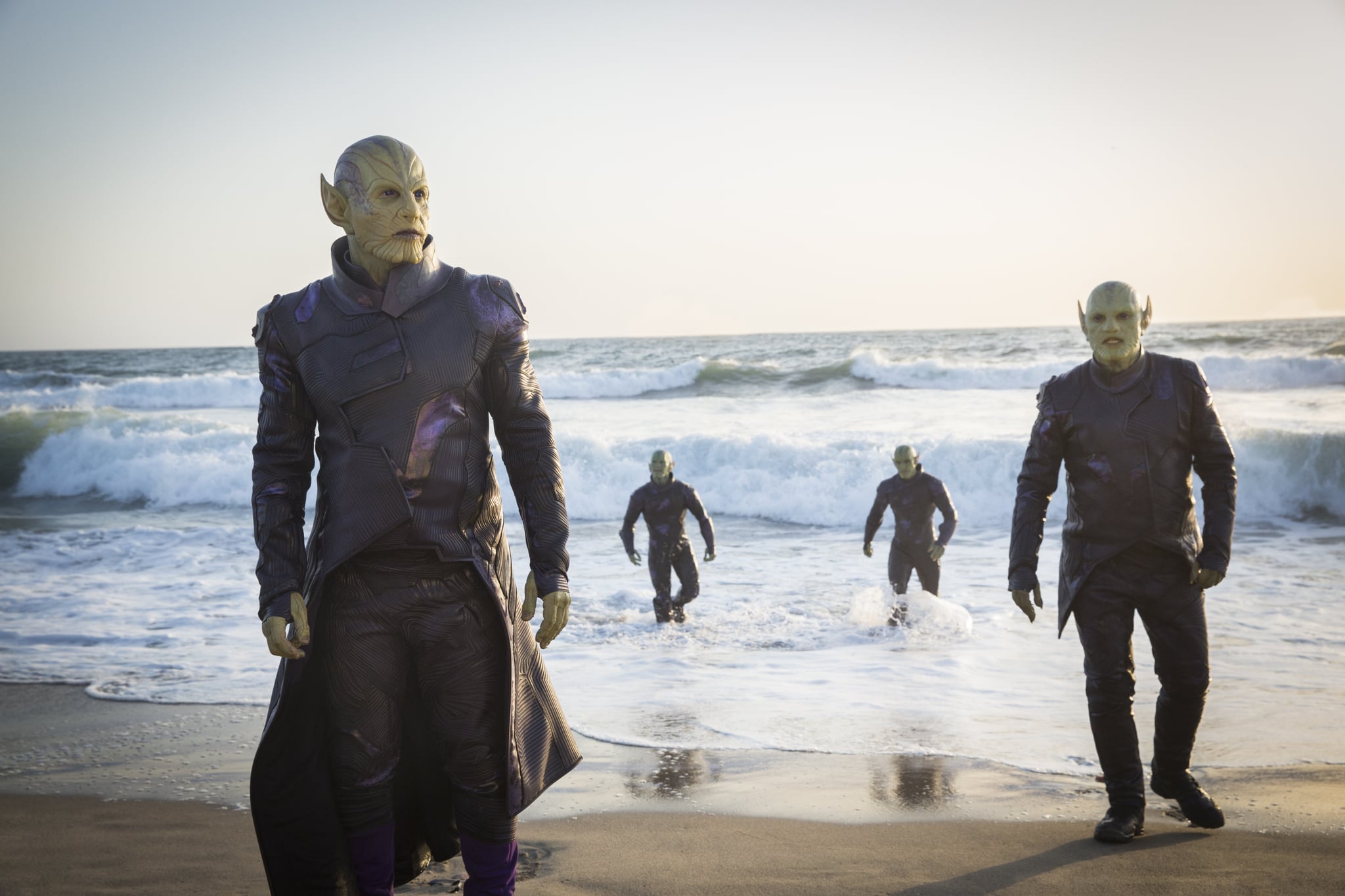 When Captain Marvel hits theaters in March, Marvel fans will enter a deadly intergalactic war that leaves Earth smack dab in the middle, facing certain danger. That's right, there are two alien races in play for the film: the Kree and the Skrulls. But perhaps the ones you've heard about more are the latter. That's because they appear pretty prominently in the handful of trailers we've seen so far. The old woman Captain Marvel beats up on the train is a Skrull, and another shot in the most recent featurette shows off one of their most notable abilities: shapeshifting. We're already paranoid, guys.

Over the Summer, POPSUGAR visited the set of Captain Marvel with a small group of journalists, where we got a prime lowdown on the film's big enemy. Sure, we could compile a bunch of Skrull information from around the internet, but wouldn't you rather hear it straight from the mouth of the big bad himself? We interviewed Ben Mendelsohn as part of our visit. If you're not aware, Mendelsohn is a rather accomplished villain in Hollywood. In addition to his evil character in Captain Marvel, he's gone bad for films like Ready Player One, The Dark Knight Rises, and even the critically acclaimed Rogue One: A Star Wars Story.

Related:
Allow Captain Marvel to Introduce You to Your Next Fuzzy Little Obsession: Goose

This time around, Mendelsohn is venturing into new territory. After hours in the makeup chair and a lot of prosthetics, he's stepped into his most transformational role yet: an evil creature by the name of Talos. Talos is a Skrull commander who drives the major action of the film: an invasion on Earth. "Skrulls take on any shape or form that they can see," Mendelsohn said, describing the origins of his character. "Skrulls are the tough guys of this universe, and surrounded by a lot of punks. I play a Skrull by the name of Talos who's . . . I don't know what to tell you. I mean, he's bad. He's a Skrull. He's bad off."

With our curiosity piqued, Mendelsohn shared even more details about the Skrull alien race: "The first time you ever see them, they're these sucky little tadpole, sort of communist-era creatures, you know. We've advanced since them. But it's the same gig. It's see it, copy it, memorize it." But here's an interesting fact: in the comic books, Talos isn't actually able to shift his shape. There's a good chance Captain Marvel has changed this aspect of his character, since one photo from the film seems to show Mendelsohn in the flesh. Technically, the caption describes him as "Agent Keller," but if a regular Ben Mendelsohn is roaming around in Captain Marvel at some point, I'd be willing to bet Talos sees him and assumes his form.

During our interview, one journalist brought up this fact about Talos — that he can't shift in the comics — and asked if they had changed it for the film. Cheeky as ever, Mendelsohn may as well have confirmed it. "I can tell you that at some point, I will look beautiful. That's all I can tell you with any certainty." When another journalist quipped that he already looked beautiful in his full Skrull prosthetic glory, he laughed and clarified. "Oh, no, no, no! You know, more human beautiful, more traditional. Sort of like, 'Oh, wow, that's a very appealing-looking human.'"

As if excitement around the character isn't already high enough, there's another facet to Talos. He may be more of a sympathetic villain than you'd expect. In one scene we witnessed during our visit, he appears to have been imprisoned with young Skrull refugees: innocent mothers and children from his home planet. There is a sort of nobility in the way he protects them, a bravery that might end up endearing you a little bit to his character. "I mean, that's the modern reading of the bad guys, that they don't see themselves as the villain," Mendelsohn said of the tender scene. "And yeah, you've got to find a way in, but what's more important is to just make all the component bits work." Something tells me the line between good and evil will be quite blurred in this film.

Movie Trailers
Margot Robbie, Taylor Swift, and Anya Taylor-Joy Are All Starring in a Movie Together
by Eden Arielle Gordon 21 hours ago