Well, we didn't see that one coming. Of all the ways we thought Elena might die when we learned that Nina Dobrev was leaving The Vampire Diaries, we did not predict this. That's partly because Elena's exit involves her not dying at all — and yet, dying . . . in a way. Confused? We can explain. Spoilers ahead, obviously. 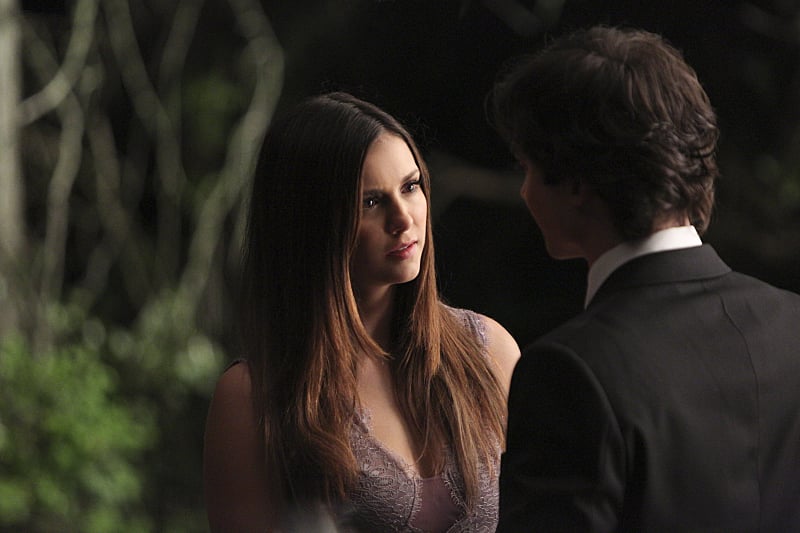 After that bloody wedding, Kai's punishment isn't done yet. Elena lays lifeless in the rubble, and Damon gets it together enough to take her to the hospital, where she appears comatose. A vengeful Kai explains that she's neither waking up nor dead because of a spell he created: Elena will remain "asleep" until Bonnie dies. It's Kai's ultimate revenge against Bonnie for trapping him in the prison world, and it's a doozy. But it still has sort of a loophole. See, Kai counts on a lovesick Damon to kill Bonnie and thus wake Elena up, but he's come a long way. Damon only pretends he's going to let an injured Bonnie die to distract Kai, and then wack! Damon slaps Kai's head off.

In the kind of compromise that would only be useful if most of your friends are vampires, the group decides to keep Elena in her sleeping beauty state while Bonnie lives out her life. Therefore, Elena the character lives — with the possibility of Nina Dobrev coming back, one of the questions we had about her departure. (Though we think she'll come back before that 60 or 70 years is up.)

The plot, complicated and even convenient as it may be, is also a clever way to let Dobrev film scenes with just about every one of her costars, one on one (which we unknowingly had a preview of thanks to the casts's Instagrams). The goodbyes (technically see-ya-laters) are infused with so much emotion because the costars were really saying goodbye. And, of course, Damon and Elena have the best closing scene with their beautiful, romantic dance. It just supports our belief that the Delena love will go on even without Dobrev on the show. Until, of course, she might decide to return someday.

Summer Fashion
Molly's Vacation Style on Insecure Is the Perfect Mix of Sexy, Comfortable, and Beachy Chic
by Perri Konecky 22 hours ago