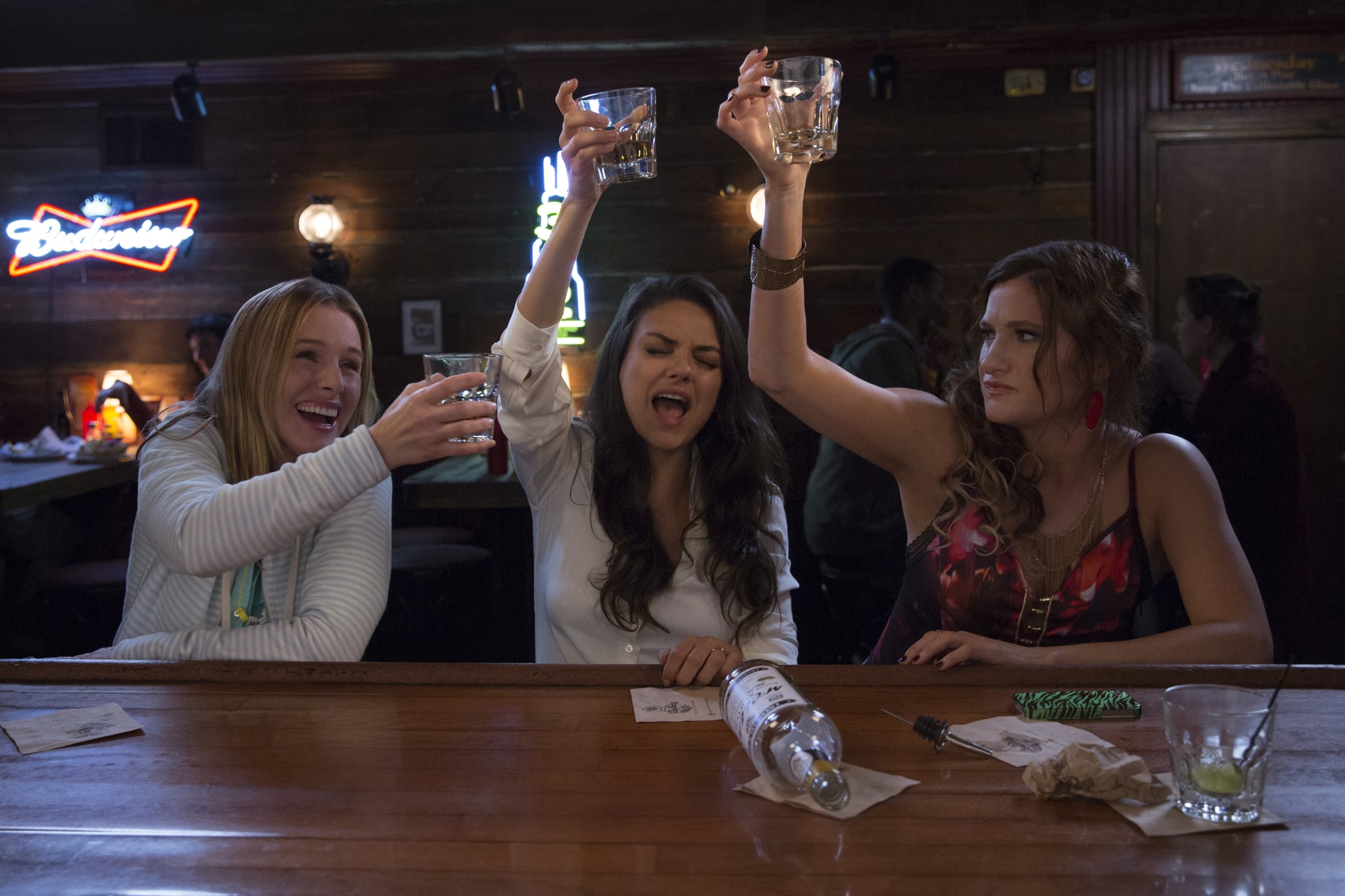 It's a weekday and I'm sitting in a director's chair between a produce display and a freezer holding frozen alligator meat. I'm in the back row of a small group of reporters who are all fixated on a monitor, watching Kristen Bell, Mila Kunis, and Kathryn Hahn sprint down a cereal aisle. Hahn stops halfway through the take and voraciously makes out with a confused (but satisfied) stock boy. Later, our group moves into the salad dressing aisle to watch the trio repeatedly waterfall vodka, Kahlúa, and milk into their mouths.

It's the set of Bad Moms, a comedy so acutely focused on the trials facing modern mothers that you may be wary to learn that it's directed by a couple of men. Jon Lucas and Scott Moore wrote the Hangover trilogy, but both they and the cast are careful not to label Bad Moms as the "Female Hangover." Sure, both films showcase a myriad of bad behavior from their quirky main characters, but in the the case of Bad Moms, those poor choices are earned.

After a long day of filming in the Louisiana supermarket, the stars, still full from digesting far too much milk and cereal (which they also had to consume en masse for the camera), stopped by for a chat. All three were wearing parkas, and all three were surprisingly candid about their real-life experiences as mothers. Bell has two kids with husband Dax Shepard, Kunis has one and another on the way with husband Ashton Kutcher, and Hahn has two with husband Ethan Sandler. Spoiler alert: motherhood is hard.

Obviously you're all mothers. Have you ever had one of those moments where you feel like a bad mom?

Kristen Bell: I might not be perfect, but I feel perfect. I think that's all that matters.

I guess what I mean is one of those moments where something's going crazy and you're just hands in the air, no idea what's going on?

KH: Every day. There are some days where, at the end of the day, you've done OK. It's the most out-of-control feeling you possibly can have.

Since you started working on the movie, have your friends been telling you their bad-mom stories?

Mila Kunis: My friends have always been very open with their horrible-day excursions. I think we all have some. I don't know that this would be necessarily prompting my friends to be like, "Oh wait, me too!" It mostly happens every day, they're like, "Holy sh*t, let me tell you about what happened today." I think it's an everyday occurrence.

KB: I find when I mention it, people are excited about the topic. They find it refreshing what we're saying about motherhood.

"We all feel overworked and terrified we're messing up our humans." — Kristen Bell

MK: I think people like to know they're not alone. I think that the second you're like, "oh wait," and that you can put humor at it and it's something that you can bring light of. I think before my parents were raising my brother and I, everything had to go perfect. . . . I think nowadays, if sh*t's going wrong and I call my best friend and I'm like, "I don't know, this color is coming out of her nose and I'm pretty sure she's dying." And it's OK to do that now, but I don't know if it necessarily was OK before. I think this movie brings light to that.

KH: We were talking about it, how we live in such a crazy, child-centric culture where there's this unattainable perfection. There are so many books. My mom, she had Dr. Spock['s Baby and Child Care].

MK: Both our moms just had one book — Dr. Spock. It was the only book that they followed. That's it.

KH: It's crazy. Even just blogging alone, there's this perfection. Everything you think you're supposed to feel even, or do. When it doesn't match up with what everything that the culture is telling you to do, you feel like a failure.

KB: But this movie blankets the whole topic of motherhood in a way that the message is: There are endless ways to do it. And however your gut is telling you to do it, that's what's right. It's a unifying message that we all feel less than; we all feel frazzled; we all feel overworked and terrified we're messing up our humans. But that's the beauty of this entire movie is it's unifying. It's like moms in solidarity.

When we were talking earlier [to the producer], she said there's tons of kids here all the time.

KB: Everything is sticky.

And you're wearing the necklace that your daughter made you while in character, right?

KB: I am! She made it over Thanksgiving and I wear it a lot, and I wore it into a fitting and it just seemed perfect with every outfit so we made a bunch more, so yay! 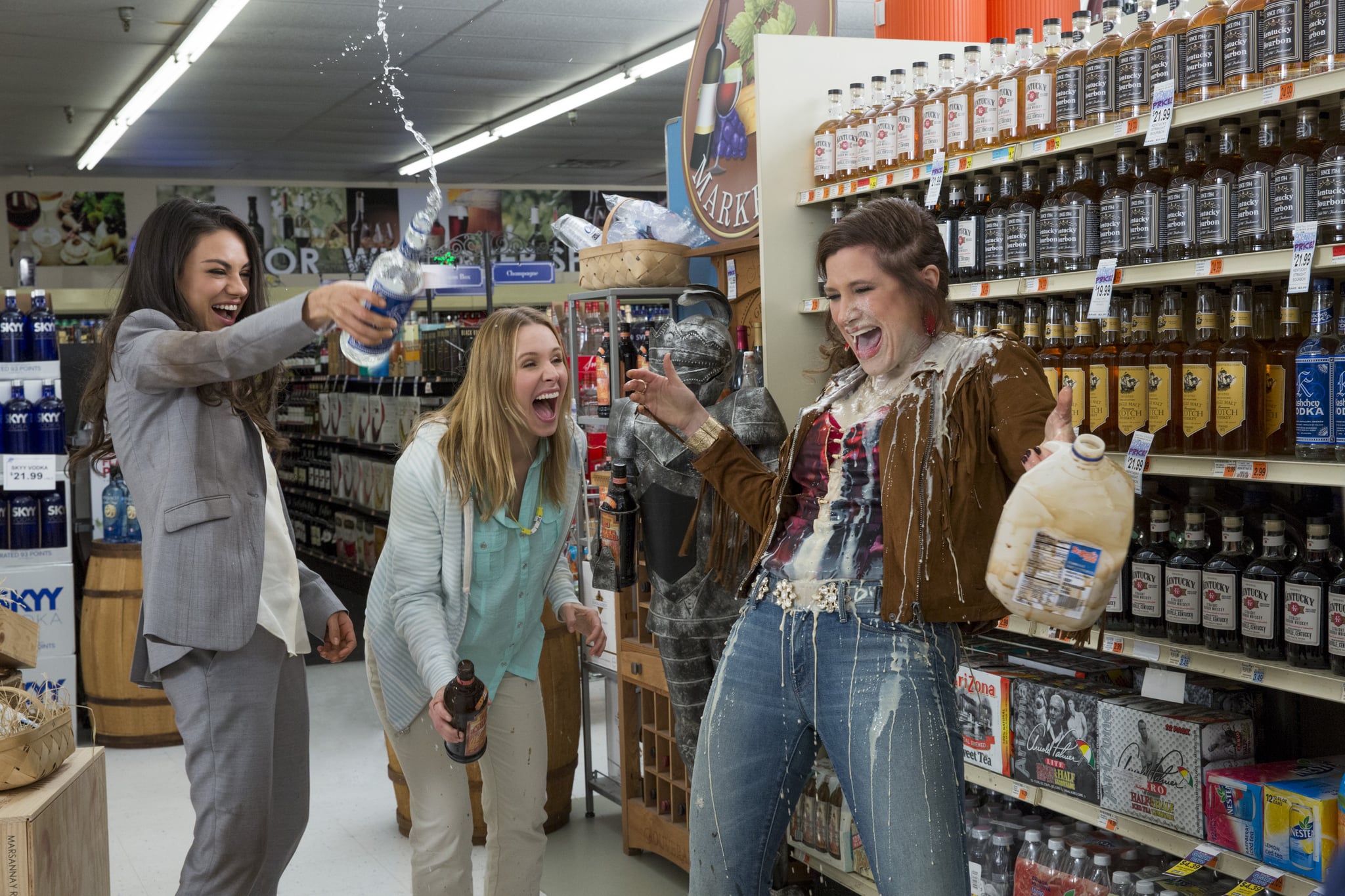 KB: Choose your props wisely. Well, I mean a gallon of milk would be . . .

KH: I mean, that was filling.

We were all watching and just silently cheering for you. It was amazing.

KH: It was disgusting. It was fun though. I mean, forget it. It wasn't real milk, which was helpful.

Wait, what was it?

What is the best part about being in a movie starring all women about women aiming at women?

KH: We can just get real and dive into the deep end real fast. Very fast.

KB: Yeah, it gets intimate real fast. We're all in the same boat and we see each other and we're all like, "Oh hey, you're in this too."

KH: Which is kinda where I wanna live all the time anyways, so we just really . . . it's great. There wasn't a lot of tiptoeing around. We got real down and dirty.

KB: Being a mom can be so isolating, and hanging out with other moms is very, very healthy.

KH: And your cycles really arrange.

Is there anything you guys do in your own lives to avoid getting to this breaking point?

KB: My husband and I tap out and take mini meditative breaks because we have two toddlers — they're so f*cking loud — and we keep an eye on each other. We'll go, "Oh, OK, you can take a break; I'll take over." When you're in the ring, you gotta tap out with your partner. That's how we do it.

MK: I only have one little human. She's not so bad. These two [motions to her costars] got two. I have an amazing husband and my parents live in the same town as I do. But she's only 17 months old. She's rambunctious, but she's not there yet where she's 2 and a half and I'm like, "Holy sh*t, this is a demon baby." 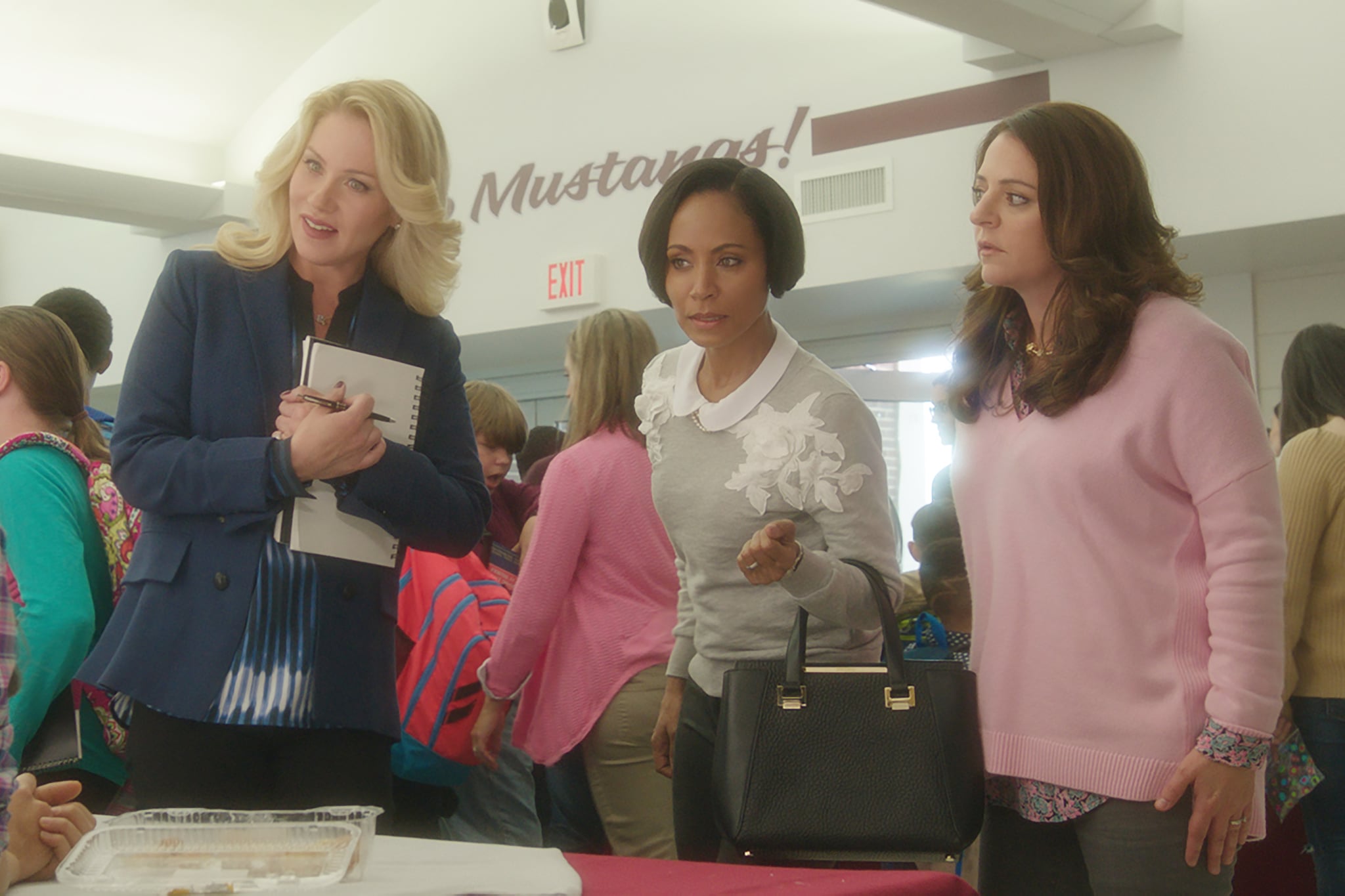 How do you deal with mothers like the judgmental PTA moms from the movie?

KB: I'm not really there, so I'll pass it to Kathryn, but I will say this: I find that the vast majority of people who are judging are just fearful or insecure.

KH: I feel like it's just justifying your own way of doing it, and then you just need to believe. I think for some of those women, they just have to believe that the way they're doing it is the only correct way because that's the way they're doing it. So they have to justify it. I used to take it very much to heart because I always felt like the kids that were like flea bags, just a mess, and I always felt like I had toothpaste drooling down. I couldn't believe the moms that would show up with not only their hair and makeup perfect, but their children with their hair brushed, with a clip in it that the kid doesn't rip out. I was just in awe of that and the perfect bento box lunches. But I just feel like who cares, really? You find your tribe and you stick with 'em.

KB: I think when there's so much information to be eaten up and so many different ways to do it, people cling to groups. I think that we, as monkeys, want to live in smaller groups. It's very scary when we're all — as wonderful as it is — connected. So you're struggling for your own identity because you need that, but I think that's the great thing about this movie: it's a reminder that we're all on the same team. We're all on the same team, guys — as women, as moms, as friends, as parkas.

"It's the competitive energy that is so destructive." — Mila Kunis

MK: It's the competitive energy that is so destructive. It's just like you said, we're all in it together. You only are a mommy in this way for such a brief amount of time anyway that you don't wanna look back and be like, "Why did I care about that stupid nonsense?"

Before you had kids, was there anything you felt really strongly about your future children not doing?

KB: It looks so beautiful in the corner of the living room!

To change gears a little bit, this is the last couple days of shooting. Can you talk about the experience of shooting this?

KB: It was a fly-by-the-seat-of-your-pants kind of shoot.

MK: This has been the fastest shoot I've ever been on in my life. This truly has. I think at one point I was like, "We have five days left?" I'm actually sad about it. I very rarely get sad about any movie [shoot ending].

KH: Think about a whole movie where I've had not one talking scene with a male actor. It's pretty amazing to think like, yeah, total clam jam.

MK: I think hair and makeup room in the morning was always really fun — there were no guys in it ever.

KH: We're also so lucky. I feel blessed that it's such a low-maintenance group of ladies because the hair and makeup trailer is so much fun.