Fans came out in full force at the D23 Expo in Anaheim, CA, this weekend, hoping for any scraps of news or footage from Star Wars: The Force Awakens the studio would bestow upon them. They weren't disappointed. Not only was it announced that Disney has grand plans to integrate the franchise into its theme parks, but it was also revealed that Jurassic World's director Colin Trevorrow will succeed The Force Awakens director J.J. Abrams for the next installment in the series. Abrams spoke with a group of reporters backstage at the event — which is essentially a Disney-centric version of Comic-Con — about why he's "jealous" of Trevorrow, the practical effects he refused to sacrifice in the making of the movie, and the unveiling of Gwendoline Christie's Captain Phasma. Read on, and stay tuned to watch our interviews with Star Wars stars Oscar Isaac, John Boyega, Lupita Nyong'o, and Daisy Ridley. 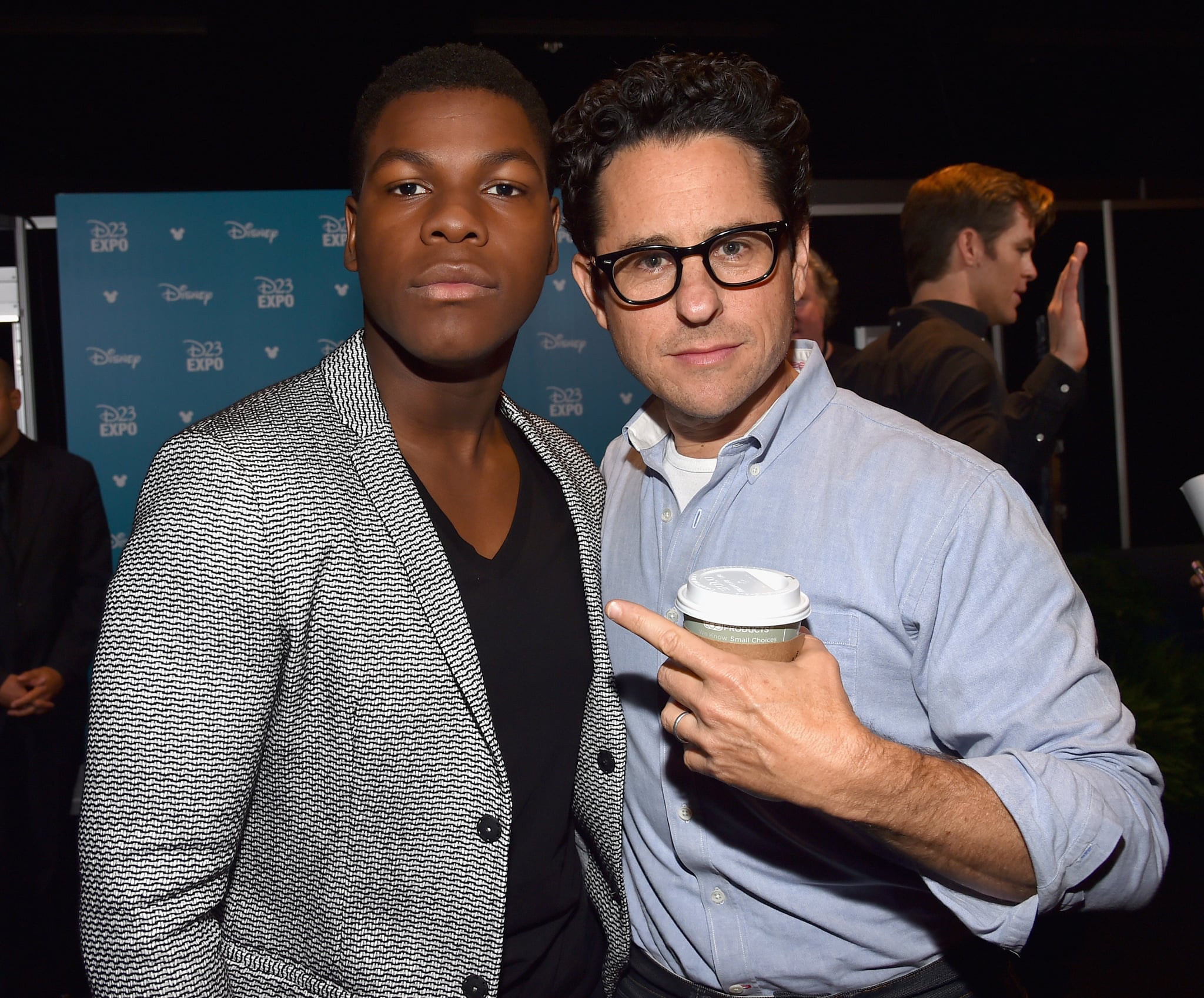 On Practical Effects and What He Wouldn't Use Computers to Fake

"Obviously, it's Star Wars, and there are going to be thousands of CG shots in this movie, but it was really important that wherever it didn't need to be, it wasn't. It's incredible how much gets sort of pushed off to sort of solve later — we'll shoot it on blue and figure it out later, we'll shoot it on green and we'll make the set later — it was really important for a sense of authenticity that the sets be built. The exterior, the interior. That we go to real locations, that we're actually in the sun. I know it sounds silly, but in the behind-the-scenes video, you see this giant gimbal of the Millennium Falcon cockpit, and it was outdoors, and the reason we did it — we didn't have to do that — but the reason we didn't want to is, you just can't fake sunlight. You can do a pretty good imitation, but you can just tell. There was something about wanting to see Daisy's character actually in the cockpit with sunlight streaking across in motion. And it's a little detail, and I'm not sure anyone's going to care about that, but it's incredible when you see it just how much better it looks, because it's real. So we just tried to do that as much as we could, and it was often challenging, but it was worth it.

On His Advice For Colin Trevorrow

"Colin doesn't need my advice. He's going to kill it. But I will say that he's going to be spoiled by this remarkable cast and incredible crew, and I'm jealous that he gets to work with them, because they're terrific. All of them."

On Our First Look at Captain Phasma

"Isn't that cool? Oh my God. Gwendoline Christie is my favorite. She just killed it, and you think, 'Well, what? It's wearing a costume.' But it's a lot to wear, and to have a performance when you're wearing that requires a different kind of skill set and an additional sort of talent. And she's got it. It's an incredible thing to work with her, and I am glad that the character's been designed as visually as stunning as it is, because she deserves it, and the fans do too. When I first saw that design, my mind was blown. It looks so undeniable."

On Damage to Chewbacca's Costume Caused by . . . Hugs

"There were these amazing people in the costume department who were sitting and punching in the hair. They literally take a needle that has the round part cut off and use it to punch in one hair at a time, and they sit there for weeks at a time to finish the arm, finish part of the [costume]. It's an incredibly time-consuming job. It seems like a thankless job, but I kept trying to thank them. You can't deny Chewbacca, so people would just constantly — whoever would visit the set or be there, even some extras — before the day was over, they'd kind of go over and embrace Chewbacca. It was an ongoing thing, and you know, one of the casualties was patches of hair on the suit. I thought that was a good thing."