It's no lie that Jamie Chung and Bryan Greenberg make one adorable couple, but now they are taking their romance to the big screen. The couple, who tied the knot last November, costar in the new movie, Already Tomorrow in Hong Kong, as two young people who just happen to fall for each other at the wrong time. We had a chance to sit down with the sweet pair and they talked about their characters' instantaneous connection as well as how their own love story unfolded over the years. 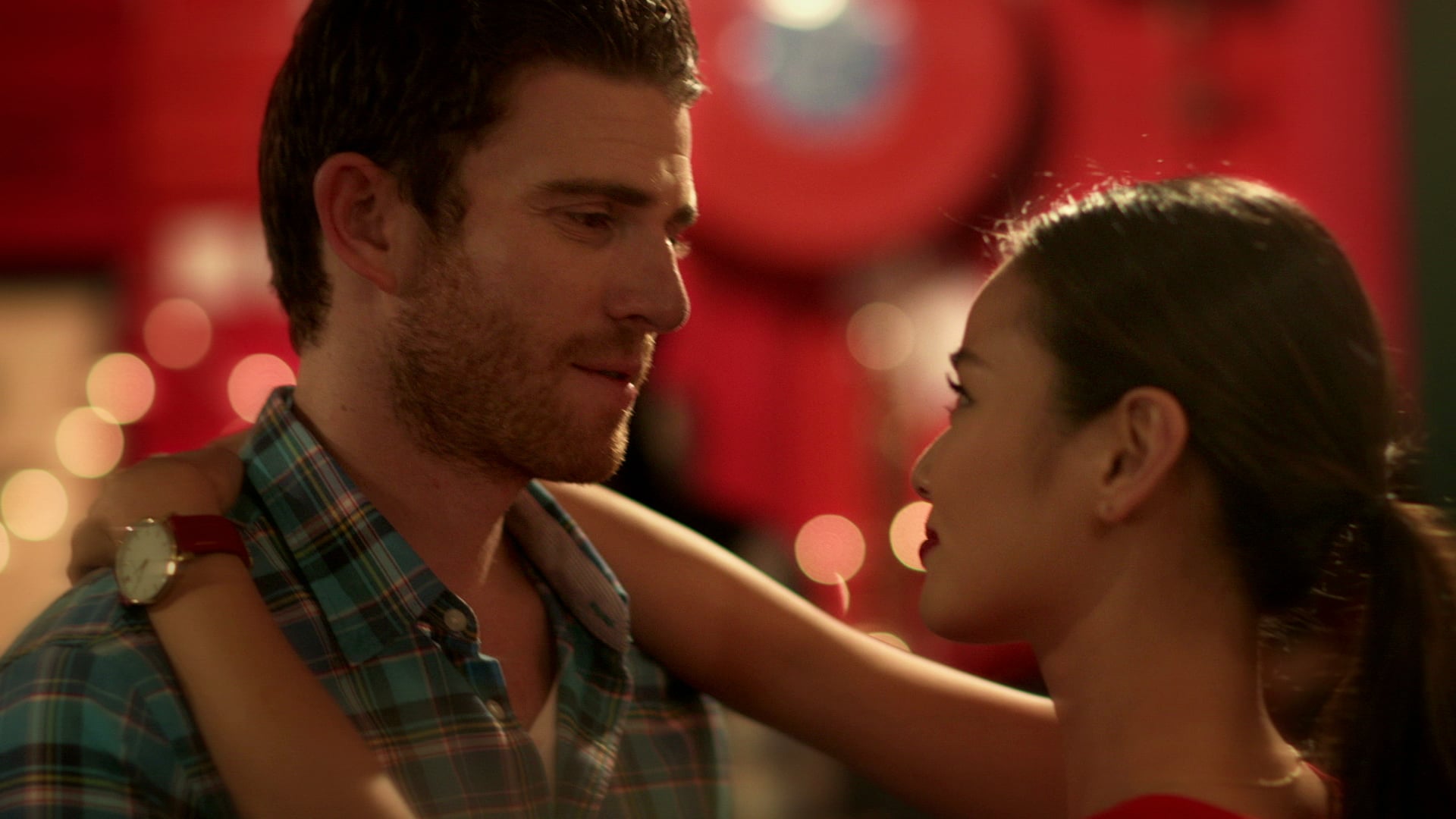 POPSUGAR: In the movie, Josh talks about how "it's already tomorrow in Hong Kong" referring to the fast-paced lifestyle of the city. I feel like the phrase also symbolizes Ruby and Josh's fast-paced romance in the movie. Was it like that with the two of you?

Bryan Greenberg: It's a very fast-paced city. Even coming from New York, it's going really fast up there. And I feel like just the time change and just trying to call back to the States and they're a day behind, but also China is on the up. You just feel like they're so progressive over there and it does feel like the future. You're living in the future a little bit.

Jamie Chung: I think it says a lot about our characters' relationship because it takes place within two days, a year apart. It kind of starts off strong and then dies out with an atom bomb, and then it's over and then we pick up again a year later. It is funny that Hong Kong is so fast-paced and the relationship is so fast-paced. The story is told in a great way.

PS: What about in your personal lives, when you two first met? Was it that instantaneous with you?

JC: Me too, but we were both in relationships, or I was just out of a relationship and he was still in one, so it was very respectful. But I always wondered about him afterwards.

BG: Yeah, me too. And it was very defining. I don't remember every time I meet everybody, but I remember the first time with Jamie. I think that's what attracted us to this film because we could really relate to the stop-start of it all and the question of is the timing right, or is it not? Maybe, don't wait for the timing to be right and you make it right on your own.

PS: One thing that is so endearing about the character of Ruby (Chung) in the film is that she encourages Josh (Greenberg) to do what he's passionate about. How do the two of you inspire each other?

BG: For me, it's how humble Jamie is and her work ethic. How she just keeps her head down and doesn't get caught up or too far ahead of herself with things. For me, I look at her and I'm like, 'Man, I wish that I could be that chill' when there's high-stake situations and she's calm as a cucumber. Sometimes I wish I was that grounded and it's inspiring.

JC: It's hard not to fantasize, 'Oh, if I get this job, I could go to Paris and I'm going to live there for a year' or just get swept up with the daydreaming, but I'm more of a realist. It's like, it would be nice, but we'll plan for it if it actually happens. But in terms of having a partner in the same industry, there are pros and cons and lot of people suggest not having a spouse that's also an actor because the scheduling and timing is really hard, and so far it's been really great for us, but we understand it so well and it's nice when one person is down, the other one has the responsibility of picking each other up. So, it's back and forth.

PS: There was a really cute moment when the two characters bond over their love for Seinfeld. Are there any shows in particular that the two of you like to watch together?

JC: We love it! But Bryan gets so mad at me because the shows that I don't watch, like Breaking Bad, never seen it, maybe watched the first season and then it's the series finale and I'm like "Okay, I'm going to watch it. Everyone's talking about it, so I'm going to watch it with Bryan." It's the one night we get to watch TV together and the entire time, I'm like, "So, what happened? So why do they hate each other? Wait, why is he kidnapped?" He stops the show and he's like "I cannot do this with you right now."

JC: But the one show that we do bond together with is Naked and Afraid. And there are so many shows that I'm supposed to watch with him, but I'll watch ahead and he gets really upset. And he does the same thing to me and I get upset. Another show we love is The Knick.

BG: And Game of Thrones!

JC: That's the one show that I will wait for you.

BG: Well, she says she'll wait, but she'll actually watch it and then watch it again.

PS: There are so many beautiful shots of the city in this movie. What would you say was your location to film at?

BG: I like when we're walking and you can see the whole skyline light up behind us because they do this beautiful thing every night where it's like a light show and I don't know any city that does that. It's so amazing. I mean, yeah the Empire State building lights up, but nothing on this level. It's all coordinated. We were shooting on the ferry and you could just see it light up behind us. It was gorgeous.

JC: I think my favorite was Lan Kwai Fong, the clubbing. We needed the atmosphere and we did a really long lens. So the camera was set perched up on a second floor balcony looking down because otherwise if we came down with a camera people would go crazy. It was fun to have just the two of us dive in and be with college kids. And it felt like we were just on a secret mission because we knew where the cameras were, but we were shooting the movie.

PS: What I love about this film is that I feel like it is a great Valentine's Day movie for both couples and singles. What are your plans for your first Valentine's Day as a married couple?

BG: I told her now that we're married I don't have to worry about Valentine's Day anymore now, just anniversaries.

JC: Usually for Valentine's Day we go on a little adventure, so we'll just hop in the car and go do something.