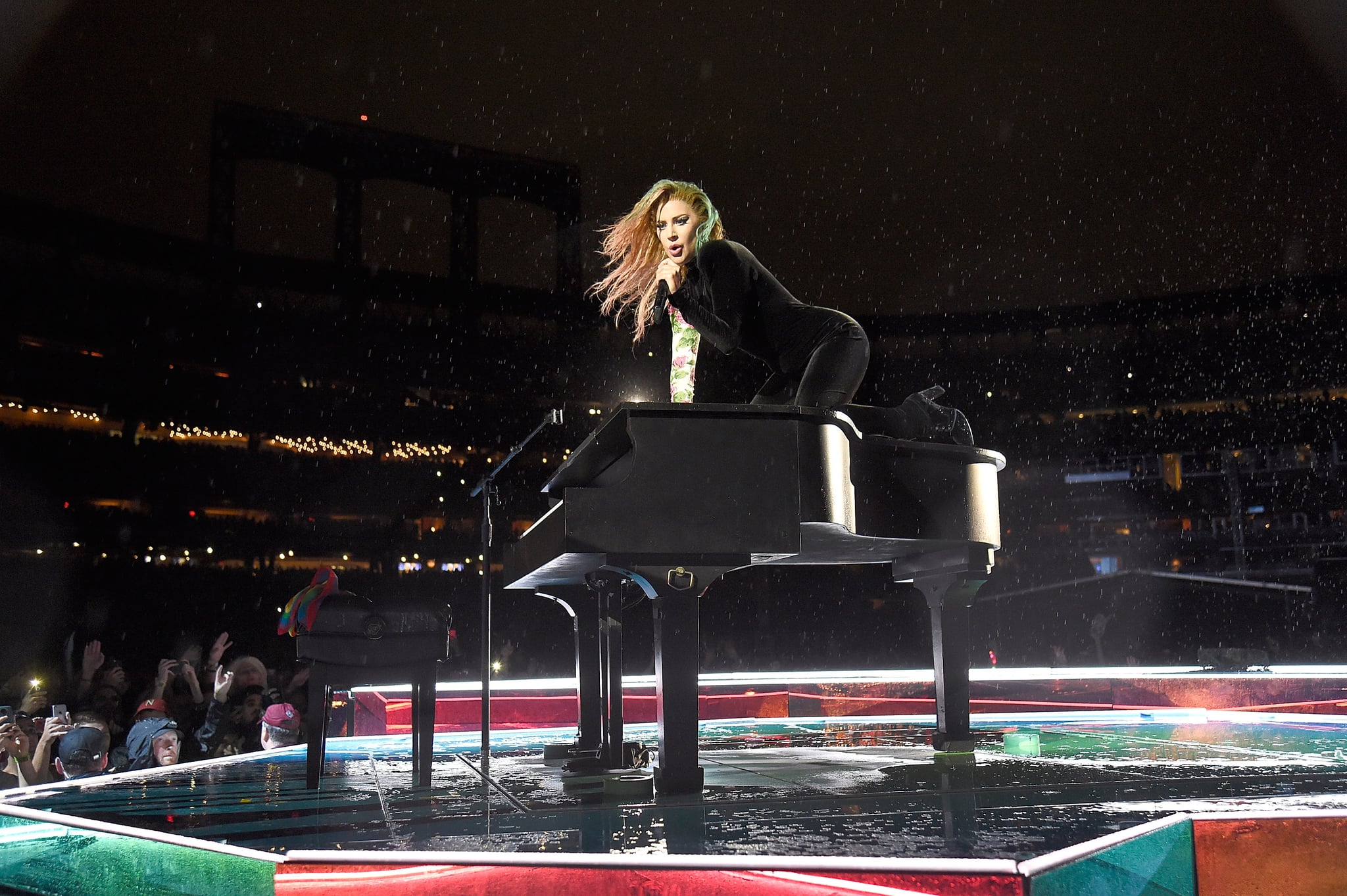 When I went to night two of Lady Gaga's Joanne world tour stop at Citi Field in Queens on Tuesday, I wasn't expecting to fear for her life. If anything, as a huge Gaga fan, I feared that my own heart might give out. But, lo and behold, as she climbed on top of her piano at the end of "Come to Mama," with a torrential rainstorm pouring down around her and making the stage slick under her high-heeled boots, I felt my stomach tighten for one brief moment.

Then I remembered who the f*ck I was watching — did I really think a little bit of rain was going to stop Lady Gaga?

Although her collection of cotton-candy-colored wigs, eye-popping costumes, and, of course, her pink cowboy hat from Gladys Tamez Millinery managed to stay dry throughout her Monday night performance, Tuesday was a different story. Following an up-close-and-personal tour of her stage before the show, courtesy of Citi, where I got to see what it really looks like behind those massive screens, the heavens opened up and I joined the crowd in slipping on a baggy plastic poncho.

Now, Gaga obviously wasn't going to swap her ice-blue, pearl-studded bodysuit or her hand-painted V2Bentley jacket for waterproof gear, no matter what the weather situation was like. Instead, she rocked those costumes right into into the rain, abandoning the dry safety of her stage's overhang and strutting onto the catwalk that extended into the audience. The result, which should come as no surprise to anyone who's been lucky enough to witness one of Gaga's electric performances live, was one hell of a concert.

"So about an hour and a half before I came on stage tonight, they told me that it was broken," Gaga said, referring to the complex mechanics of the Joanne tour's sets. "I thought about it. And I thought, 'Well, I'm not broken, so . . .'" The crowd erupted in loud cheers and applause. "You know, it's really cute what [the stage] does. It goes up and down, and it's like an illusion and some sh*t. But you know what isn't an illusion? My voice. What is not an illusion is when we're dancing and playing live for you all night long. And when they told me it was raining and I'd probably slip in my heels, I said, 'No, that's also not an option, not in New York.' Here we learn how to dance on wet concrete."

Ballads like "Come to Mama" and "Joanne," which are gorgeous as is, were only magnified by the sweeping drama of the rain. Even dance-heavy numbers, like "Alejandro" (which included a moment of her writhing around on stage as it poured), suddenly became that much more intense.

In her hometown, where Gaga promised us all that she was "gonna throw down New York style, real raw for you tonight," she delivered (and then some).