People might love a good overnight success story, but in truth, Mary Lambert's isn't one. The 25-year-old was well known in the spoken-word poetry scene — even performing on an HBO special as a teen — and had been independently releasing her own music before fellow Seattleites Macklemore and Ryan Lewis asked her to pen the hook to what would become their radio hit "Same Love." Of course, the mainstream ode to marginalized romance propelled her to a new kind of fame, the kind that culminates in a surreal mass wedding presided over by Queen Latifah and Madonna at the Grammys.

Now, with her first full-length studio album, Heart on My Sleeve, on the verge of release, Mary is in a position to spread her gospel of self-acceptance to an even wider audience. She has always mined her own experiences, both painful and redemptive, in her bluntly confessional — but ultimately hopeful — music. Raised in a strict Pentecostal household, she overcame sexual abuse as a young girl; survived rape, drugs, and bipolar disorder as a teen; and identifies as both Christian and lesbian. Given her background, Heart on My Sleeve predictably has its moments of darkness and pain, but it can also be frothy and fun, just like the redhead herself. Mary stopped by our LA studio in the days before her album release to talk about the problem of making herself accessible to both fans and Internet trolls, the surprising blend of influences on her major-label debut, and — yes — her undying love for Internet cat videos. 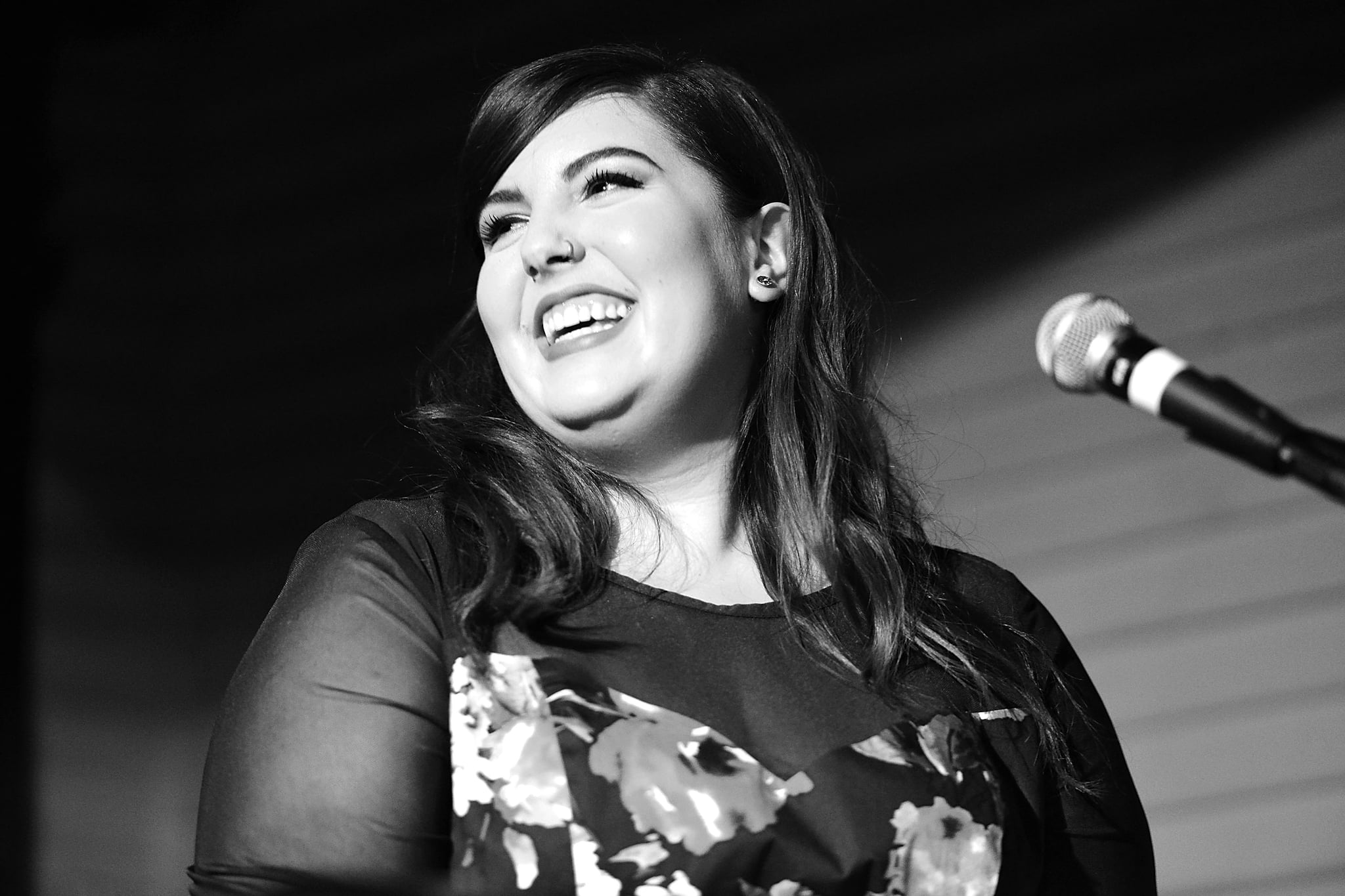 POPSUGAR: Since "Same Love" came out, your life has been on hyperdrive. Did you have a moment where you felt like you were able to take stock and buckle up for the ride, or did you just have to hop on the train?
Mary Lambert: I don't think I've been able to fully process. It's just go, go, go — and just trusting that the decisions I'm making are the right ones. When they feel good, I'm like, "I think it feels right. I'm supposed to do this." But every step of the way, I just make sure I'm being true to myself.

PS: You wrote your section of "Same Love" from the perspective of someone who's gay and Christian. There are a lot of people in each of those worlds who have a hard time reconciling those two things. How did you come to that acceptance?
ML: Writing it was a really interesting process. Around that time, I got asked to write a worship song for my friend's church, and I was like, "Absolutely." I'd never written a worship song and thought it could be great for me because I was Christian. But it felt so disingenuous. It didn't feel good or spiritual. It felt contrived. I felt like I was sort of like commissioned to write it, like . . . [an ad for] dog food. I didn't feel connected to it. For me, religion and spirituality is a personal journey, so to put it out in outward, showy kind of way . . . I didn't feel good about it. In the same way, I wanted to write a gay-rights song. When I was writing it, it also didn't feel right. So when "Same Love" fell into my lap, I was like, "OK, universe. Got it. This is what I've needed to write." And it said everything I wanted to say. It's funny, because my chorus is not about either of those things, it's just about love, which is the profound, serendipitous message.

PS: You've been honest with the struggles you went through growing up: sexual, physical, and substance abuse. And I read about your mom's own coming-out journey. How did that impact your own, to see what she went through?
ML: It's funny, because when I came out, I thought for sure it would be smooth sailing. And my mom was actually worried I was going to be [the victim of a] hate crime. She was like, "Can you just wait until college?" I realized it was a different time when she was growing up. I was grateful for the position I was in and the support system I did have. Now, when I think about it, she was probably just very relieved I could not get pregnant in high school. [Laughs] I think that was right around when Sixteen and Pregnant came out.

PS: How did you begin writing about things you confronted in your past?
ML: Well, I believe in the power of vulnerability, which is probably why people resonate with my music. I think vulnerability is really what connects us to empathy, and that, in turn, is what connects us to each other. So that's my main prerogative. I don't know if people know this, but I wanted to be a politician and go into political science, and then I was applying to graduate school to be a teacher. These were things I want to do in life to effect positive change in the world, especially in social justice. Music, for me, was a sacred place. So I was trying to figure it out. You can't really change the world through music — I just didn't see that as a palpable thing — but after "Same Love," I was like, "I can do this." Seeing the global reach of this song and the implications it has, I got really hungry to do that again. Once that happens, you can't just write a song about getting drunk at the club. For me, that's not home, and it doesn't feel good. It doesn't resonate with my soul.

PS: People who only know you from "Same Love" might expect your album to be very soul- and R&B-inflected, but I hear a lot of pop influence. I hear a lot of Sia, for example.
ML: Thank you, that's flattering. She's the bomb. It's hard, because my very first fans know me as this singer-songwriter poet who talks about sexual abuse and really intense issues. And then the people from "Same Love" know me in the hip-hop world. And when we released "She Keeps Me Warm," moms loved that song. For this album, I just wanted to make the album I've always wanted to make: a dream album. I wanted to make a pop album, and so, sonically, it's a pop record, but there are a lot of interesting songs on the margin. I do a cover of "Jesse's Girl." And then I have a song called "Ribcage," which features Angel Haze and K. Flay, and it's a little bit darker. It's very ambient. The album is really a span of things, but I think I was very neurotic about sequencing and making sure it was still a cohesive body of work.

PS: I imagine you have a much different relationship with your fans than most pop stars. How have they impacted you?
ML: I get emails all the time, but the ones that affect me the most are actually from a piece of work I did called "Body of Love" a couple of years ago. I get emails from that the most, because often girls who are in rehab for eating disorders, who have found strength in themselves — and I think it's easy to get savior complex and say, "Look what I've done with my art, I'm so amazing" — but really that person has dug and found it within themselves to help themselves heal. If anything, I am so happy to be a catalyst in that process with them. I think music does that. It reminds us of our own stories.

PS: What do you want to achieve with your music? What's one thing you hope people can take away from this album?
ML: I have a lot of goals with this record, but the main one is, I want people to be connected to each other again. It's a reflection of that hunger and cry for connection. There's a song on there called "Monochromatic," and it's about looking at people and not being able to connect in any form. Like, right here I see you, but I'd never get this interaction on the street. It's very cut-and-dried. Technology — this thing that's supposed to connect us — has really divided us and disconnected us not only from each other but also from ourselves and our perceptions of our own identities. If there's any way music can bring us back into ourselves and to each other, then this is my attempt to do that.

PS: Let's talk about Twitter. You've really embraced it, but as a public figure who signs up for social media, you're unfortunately signing up for abuse, too. How do you negotiate using it in a positive way?
ML: Trolls are real. It's a real thing, and it's terrifying sometimes. I don't look at comments anymore. That's one thing I learned over the last couple of years. But you'll see 95 percent of them are so kind. Like, "Wow, this song inspired me. I feel more comfortable in my skin. My kids love it." And it's the one comment that you see that says "Look at this fat bitch" or something. But that's that person's deal . . . And so are the compliments. Those are people's own projections of whatever they're going through, and it has nothing to do with me. I get to keep doing what I love, and that's my passion and that's my story. They're going to keep doing what they love, and if it involves putting other people down in the Internet world, I feel OK in doing what I am doing.

PS: But I think it's tough for anybody to read that stuff, no matter how much they believe in what they're doing.
ML: The trolls who are illiterate, I'm OK with, because I'm like, "Well, they're idiots." My superiority complex kicks in. But when they're very smart and having these intellectual debates about the validly of my body-positive movement, and they're like, "Well, she's promoting obesity." . . . I'm just existing, so that's the scientific microscope on your whole being that sucks. That one is not fun. I have an amazing support system. I have a supportive girlfriend and my family and my whole team — everybody that works with and around me gets me.

PS: I think what's so refreshing, too, is that you do tackle these serious subjects, but you have such a sense of humor. You're a whole lot of fun.
ML: I think so! I am a party. I can limbo really, really low, which is how I think you can tell someone can really have a good time.

PS: What makes you laugh?
ML: My brother is hysterical. He makes me laugh. I'll stay up very late and watch cat videos. I'm that person.

PS: You're a big puppy and kitten person.
ML: I know. I'm not allowed to have one. I can't, there's no way. I feel like it's unfair to get a puppy and make your puppy fly everywhere. Flying makes my bones hurt; I don't know what it would do to a dog to fly all the time.

Music
The I May Destroy You Soundtrack Has So Many Bangers, It's Doubling as Our Summer Playlist
by Monica Sisavat 3 hours ago

Anna Camp
Anna Camp on Filming Desperados, What She's Currently Binge-Watching on Netflix, and More
by Kelsie Gibson 5 hours ago