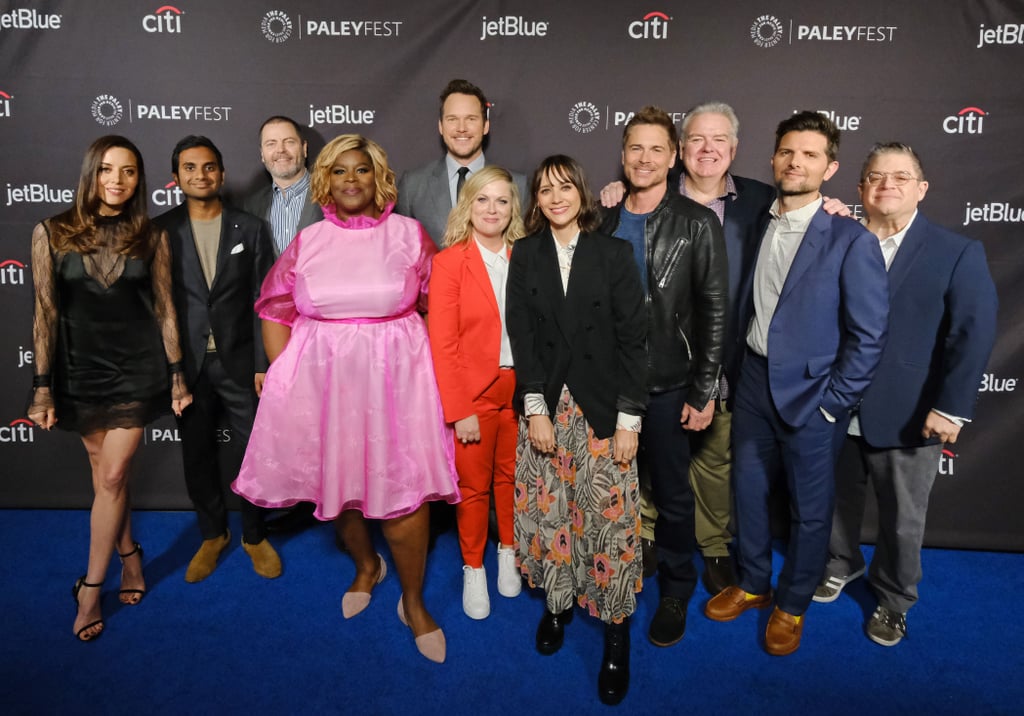 The Parks and Rec Cast Reunited, and Oh, How We've Missed These Beautiful Tropical Fish

The gang's all here! The cast of Parks and Recreation reunited on Thursday to celebrate the 10th anniversary of the beloved sitcom's premiere, and we're feeling overcome with nostalgia. Pawnee's finest left Indiana and traveled to Los Angeles for PaleyFest, a television festival that connects fans with the stars of their favorite shows. Although Ben Schwartz wasn't there (Perhaps he was too busy trying to resurrect Jean-Ralphio's Entertainment 720 business?), the rest of the crew was present, including Amy Poehler, Nick Offerman, Rashida Jones, Chris Pratt, Aubrey Plaza, Retta, Adam Scott, Aziz Ansari, Rob Lowe, and Jim O'Heir.

The former costars dressed like the beautiful rule-breaking moths they are for the special evening. Poehler went full Leslie Knope in a bright orange blazer and matching pants, while Nick Offerman looked dapper in a suit, and Retta stole the show in a pink dress embroidered with "Treat Yo'Self" as a nod to Donna Meagle's most famed saying. They joined cocreator Michael Schur on stage at the Dolby Theater for a panel to share behind-the-scenes stories and chat about the possibility of a revival. Although many of the cast members said they're fully on board with the idea of rebooting the NBC series, it looks like Schur's currently a bit too tied up with other shows to concoct another storyline. Our fingers are crossed that his schedule frees up ASAP so he can bring our favorites back to the small screen.

Keep reading to see all the epic photos from the Parks and Rec cast reunion at PaleyFest — including a frame-worthy selfie that's sure to remind you of the iconic one Ellen DeGeneres snapped at the 2014 Oscars.

Related:
12 Netflix Shows Like Parks and Recreation That Are Leslie Knope-Approved
Previous Next Start Slideshow
Amy PoehlerParks And RecreationChris PrattTVReunions