Up for countless awards this year, Boyhood was made over the course of 12 years by director Richard Linklater. How is this even possible? I chatted with one of the drama's stars, Patricia Arquette, who has been winning awards left and right, about the ups and down of creating this unique project. In case you haven't heard about the film (which is one of the frontrunners of this year's race and a definite must-see if you care about award season), it revolves around a boy named Mason (Ellar Coltrane) as he ages from 6 to 18 years old. Ethan Hawke — who also collaborated with Linklater on the Before trilogy — stars as the boy's father; Arquette plays Olivia, Mason's mother; and Linklater cast his own daughter, Lorelei, as the boy's sister. Here are all the details on Boyhood, straight from Arquette herself. 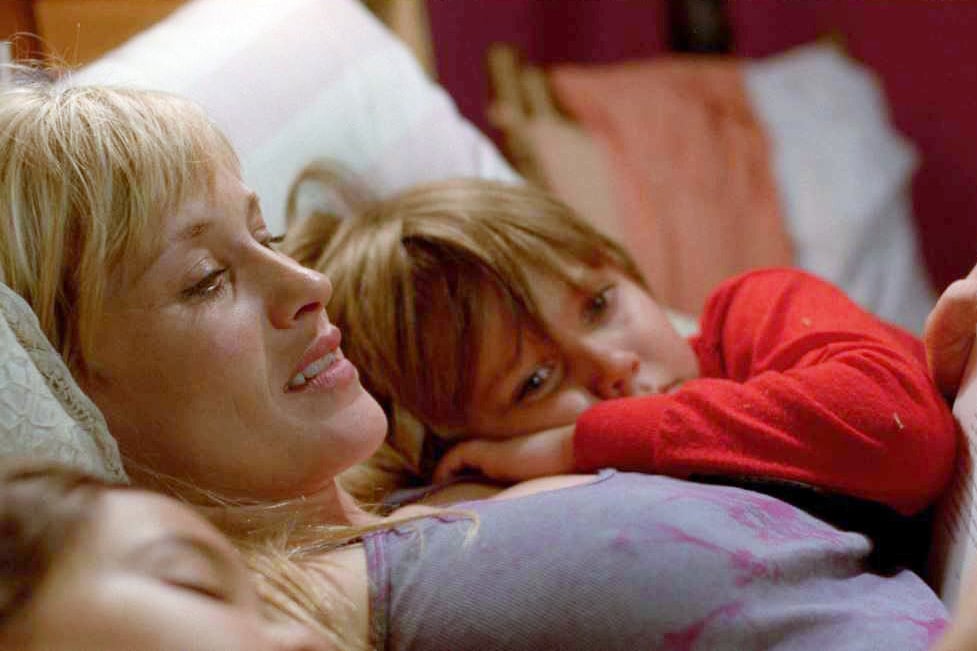 POPSUGAR: What was the initial meeting like with Richard Linklater when he told you what the project was?
Patricia Arquette: We'd met once briefly at a party, and we both told each other we were fans of each other's work. My phone rang several years later, and he said, "I'm thinking about doing this project where we shoot for a week for 12 years." Immediately my heart started thumping, my adrenaline started rushing, and I was like, "Um, wow, are you thinking about me for it?" And he said, "Yeah, I was wondering if you'd be interested." I said, "I'm in — oh, what's my part?" I didn't really care what it was, because it was such a great opportunity to work with this troupe of actors, to be able to age on screen, to watch kids grow up like that, and he told me a lot of the main details about the plot points in that first conversation.

PS: Were you ever concerned that the project might be too ambitious? Twelve years is a really long time.
PA: No, I was never concerned about that. Rick [Linklater] was just saying today, "I pretty much knew that we would most likely all be alive in 12 years, but would our financing hold for 12 years?" The fact that he was even able to get financing was mind-boggling. So we just said, "OK, go take the money and run."

PS: What was it like seeing the movie for the first time?
PA: Rick had asked if I wanted to see it, and I said, "You know what? I'm going to wait and see it at Sundance with 1,200 people." So that was the first way I saw it. The part of it that really struck me — I mean, you always look at everything skewed through your own perspective of life — was that I saw this familiar thing with Ethan's character and my character. They have a lot of resentment between them, and they really keep it throughout the movie, but I was suddenly able to see what Mason Sr.'s [Hawke's] relationship is with the kids. And I think there was so much value in that.

PS: Were you not around much when Hawke was filming his scenes?
PA: No, I knew they were doing it; I would see little moments, but to really see the richness of that relationship between a dad and his kids . . . I think if my character knew that, if she could be a fly on the wall and see that, how much kinder they would have been to each other. So that was something sad and kind of moving and was a revelation to me about how we sort of put each other in our boxes and minimize the other person's contributions. But also to see these kids grow and blossom and become complicated, specific human beings . . . It was really hard and sad and moving. It resonated for me very deeply.

PS: Was there any particular year where you got together for filming and went, "Oh my gosh, you've grown so fast"?
PA: Yeah, there were a couple years. Each of them had a year where it was particularly drastic and shocking and incredible. Their characters were much more normal in a way, or not as eccentric as they were themselves, like Lorelei had like very specific taste, like harpsichord music from the 1500s that most kids weren't listening to. She was wearing saggy jeans with a wallet and a chain, and I was like, "OK, dude, you're 7? You can't wear that. We're going to Goodwill to get you guys some clothes." There were years where they were just horrified at what they had to wear.

PS: So did the scripts change at all from year to year?
PA: He had his original vision, but we never had a script to begin with. The script would be written before we would start shooting each year, so you had to keep very open as far as acting. You couldn't just lock yourself into making some choice that will come back to bite you in the ass or wouldn't make sense really for the project. It was so collaborative; everyone would bring things from their life, like "I went to school, and my mom said this" and "When I dropped my son off at school, this is how I felt."

PS: Was it hard to dip in and out of this character while you were also doing other projects?
PA: It was really exhilarating. I look at long-term TV like it's a marathon. You're a marathon runner and you're running, and that's incredible. And then all of a sudden you go do this project like you play tennis for the day or soccer for the weekend or you went on this hiking trip in the Himalayas. It was exciting to step out of that other role, and it was refreshing to be able to go back and forth between them. I'd be working on Medium a lot of the years that I was also working on Boyhood, and there were a lot decisions that my character would make that my character in Medium would never make, so that was nice.

Patricia ArquetteMoviesCelebrity Interviews
Around The Web

Nostalgia
Tom Hanks, Daryl Hannah, and Eugene Levy Had a Virtual Splash Reunion After 35 Years!
by Chanel Vargas 6 hours ago