We've all come to know and love Paul Rudd, the comedian, but what about Paul Rudd, the superhero (or more specifically, Paul Rudd, the Ant-Man)? No one knows better than Rudd how much is riding on this week's new release — not only is it a big career departure for the actor, but the movie is also following Marvel's box office giants Guardians of the Galaxy and Avengers: Age of Ultron. Last year, POPSUGAR was on the set of Ant-Man to interview the cast, and the good news is even shrinking Rudd down to the size of an insect can't minimize his charm. 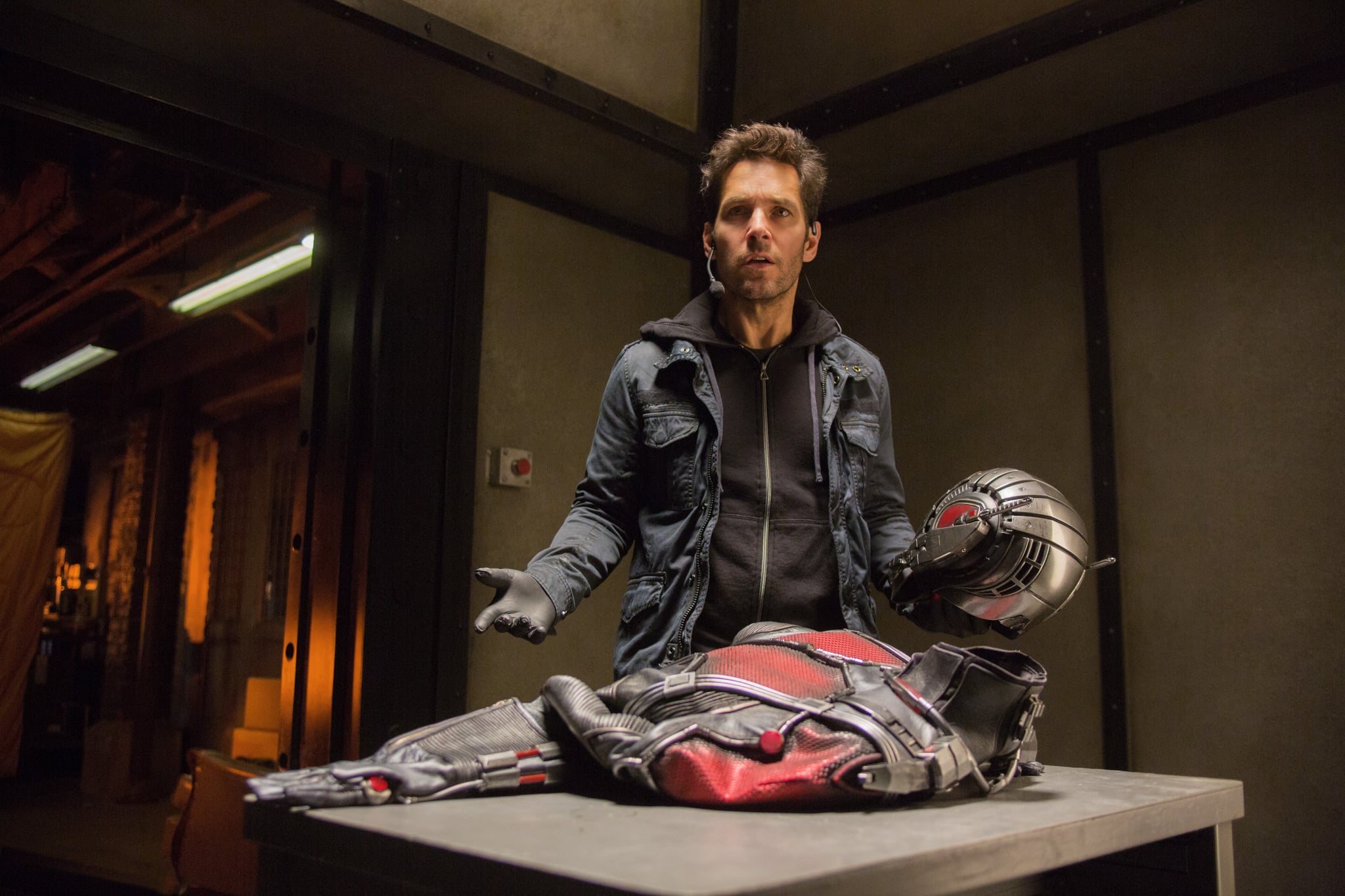 1. He Doesn't Consider Himself a Comedian

We've all gotten used to seeing Rudd being funny, but believe it or not, he doesn't identify with that label, saying, "My career took a left turn after Anchorman. I had done some comedies before, but I'm not a comedian. I didn't study sketch comedy — my background isn't that. It just happened that I worked with those guys and loved it and continued to work with a lot of comics after the fact."

To that point, Ant-Man isn't a comedy. Rudd said, "I think it fits more in line with what people come to expect from these films. It will have funny parts in it. You'd think that it would be a very silly, joke-heavy movie, but it's really not. But there are moments of levity — we are dealing with ants here after all."

2. He Gets Shy Around the Avengers

Though Rudd will appear alongside the Avengers crew in Captain America: Civil War, he doesn't feel quite like a part of the gang just yet. He said, "The only time I've ever hung out with any of them (and it wasn't even hanging out, I was just in the same room with them) was at Comic-Con, and I was the wallflower. It was like walking around with The Beatles."

3. The Superhero Diet Didn't Come Easily to Him

When asked about the craziest thing he did on the set, Rudd replied: "[The thing] that I've done on set that I've never done on any movie is stay away from the craft service table. Craziest thing I've done."

4. He Has a Newfound Appreciation For Ants

Rudd confessed that playing Ant-Man has changed the way he looks at the tiny creatures, saying, "I have seen ants in my trailer sometimes or in my house or in the car — I've seen ants and I have a very different relationship with them now. Other times, I might have flicked them outside or just, you know . . . and now I look at them as just divine intervention and friends. I'm like, 'Oh, this is your place. I'm just a visitor here.'"

5. He Geeked Out Over the Ant-Man Suit

"You put it on, and you can't help but feel kind of cool. It's a superhero suit, and it's a really good one, too. You stand differently, it feels like a suit, and because of that, working from the outside in, everything starts to change, and it's pretty cool."

When asked if he felt silly doing some of the stunts for the film, Rudd said he just channeled his inner 5-year-old, saying, "Later on today, I'm going to be hanging out of a helicopter, and I'm going to be pretending like I'm flapping around like an ant holding on to a seat belt, and taken out of context, that's just ridiculous — but it's also the kind of thing we all did when we were 5 years old and were playing in our living room. We all believe it when we're kids, it's just holding onto that, I guess."