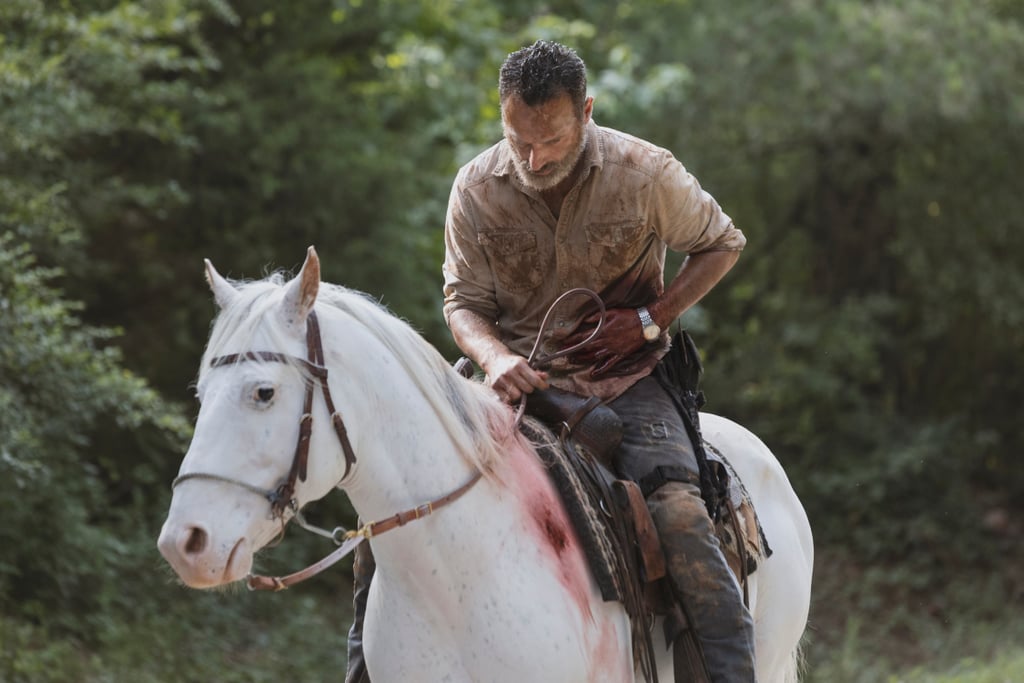 MAJOR spoilers for The Walking Dead below!

I don't know about you guys, but I think I'll be hyperventilating over the final few minutes of Rick's "last" episode on The Walking Dead for, oh, I don't know . . . ALL ETERNITY?!? That seems fair.

On Sunday night, the AMC zombie series aired an episode they'd been promoting for weeks as Rick Grimes's final appearance on the show. Although there were plenty of theories about how he'd exit, nothing could have emotionally or mentally prepared me for the twist that happens at the very end of "What Comes After," which sees Rick Grimes survive a seemingly fatal wound to the gut, a devastating bridge explosion, and being thrown off said bridge into a river. I repeat: he survives. Rick doesn't die! But the show's decision about how to continue his story unsurprisingly has plenty of fans — including yours truly — rankled.

Related:
Rick's Last Episode of The Walking Dead Is Devastating — Here's How It All Plays Out

In case you didn't see the episode for yourself, Jadis ends up finding Rick downstream after the explosion, still very much alive, and whisks him off to an unknown location in that mysterious helicopter that's been flying around for the past few seasons without alerting the rest of the group. Then the scene jumps forward in time a number of years, showing us Judith all grown up and saving a new group of survivors from a large horde of zombies. Judging from that last scene, as well as a wild promo for the next batch of episodes, clearly the show is going to focus on Judith's blossoming bond with Negan (aka what happens with Carl in the comics), new characters, and the effect of Rick's absence on the community. But speaking of Rick, his story is still far from over.

According to Scott M. Gimple, who appeared on Talking Dead after the episode, Rick is definitely alive and his character is going to live on in another venue. "We're gonna continue telling his story in a series of original AMC films," he said. "It expands the universe. It's gonna show a different corner of the world." The Hollywood Reporter has also revealed that Lincoln will continue playing the character in three feature-length movies that will air on AMC, and Gimple is already on board to write the script for the first.

There's no word on what corners of the world Rick will end up in, or why he'd choose not to return to his family, which is why The Walking Dead fandom is in the midst of a meltdown. If you find yourself among them, keep scrolling to see the most hilarious (and hilariously heartbreaking) reactions to the show's big twist.