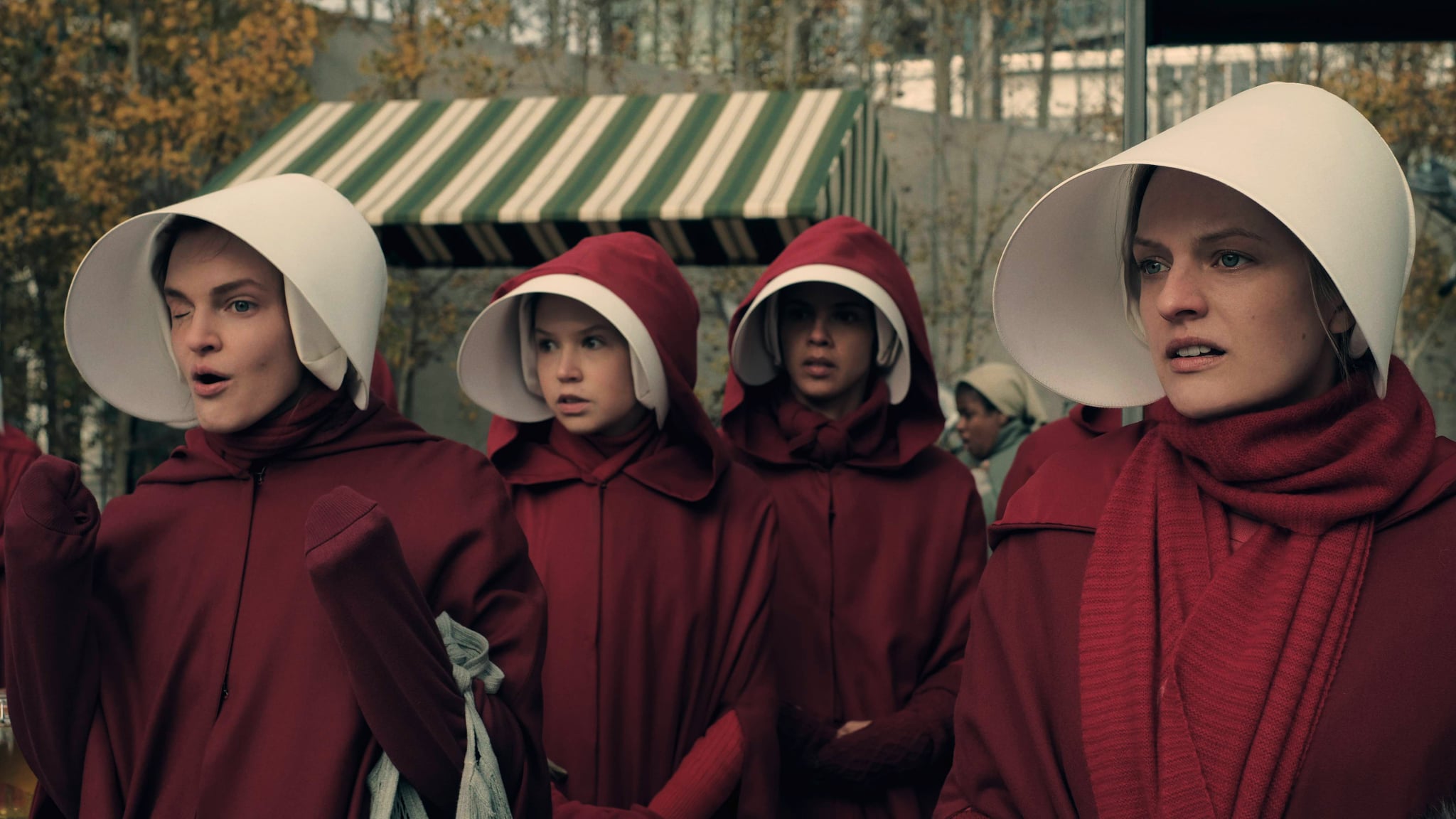 Since the first episode of the show, color has been an uncredited but vital supporting character in The Handmaid's Tale. From the deep reds of the handmaids to the vibrant teal of the wives and the muted green of the Marthas, certain colors on the show have come to represent everything from feelings of repression and hopelessness to anger, defiance, and, recently, even hope.

In a world where women's rights have been stripped away and their voices silenced, it seems fitting that their clothes would still speak. It doesn't seem to matter that the vast majority of the women in The Handmaid's Tale don't get much or any say in what they wear; when it comes to how women are perceived by the rest of their world, their apparel has always had a voice. Even in our supposedly non-Gileadian real world, "What was she wearing?" is a loaded question.

So what are the colors worn by the women of The Handmaid's Tale saying? As with many facets of the show, a lot is open for interpretation, but the costume designers have given us some clues. Back in season one, then-lead costume designer Ane Crabtree told Vulture that the red of the handmaids' garments was meant to symbolize "lifeblood," since the handmaids are functioning as Gilead's reproductive organs.

Related:
What Elisabeth Moss Has to Say About June's Journey in Season 3 of The Handmaid's Tale

However, over the course of the show, the red hue of the handmaids has come to represent far more than simple fertility. Regarding the color in season three, the show's lead costume designer, Natalie Bronfman, recently told InStyle, "The other side of the coin is anger, it's power and it's courage, so you've got the yin and the yang of that color coming forward."

But if you ask June's character, she'll say the handmaids wear red because it makes them easier to catch if they step out of line. She makes that comment early in season three while she's dressed as a Martha and out of her usual bright red garb.

It's symbolism that real-life women have taken to heart, as women are now donning red handmaid dresses at protests for reproductive rights around the globe. The blood red of the handmaids' dresses now stands for a spectrum of feminine expressivity both on and off the show, calling to mind everything from the horrific pain of sexual assault to the rich blood of childbirth, from the suffocating force of oppressive regimes to the fiery determination of resistance.

The handmaids also wear white in the wings meant to cover their heads and shield them from the world. White has long been symbolic of purity, a value Gilead claims to hold in high esteem, and covering the handmaids' heads — the highest part on their body — in white seems to be the country's way of projecting this emphasis on purity to the world. But in hiding the handmaids faces, the white wings also hint at an ugly truth — that Gilead's show of piety is merely a facade, a smooth cover thrown over its true face so that no one can see the reality of what lies beneath. 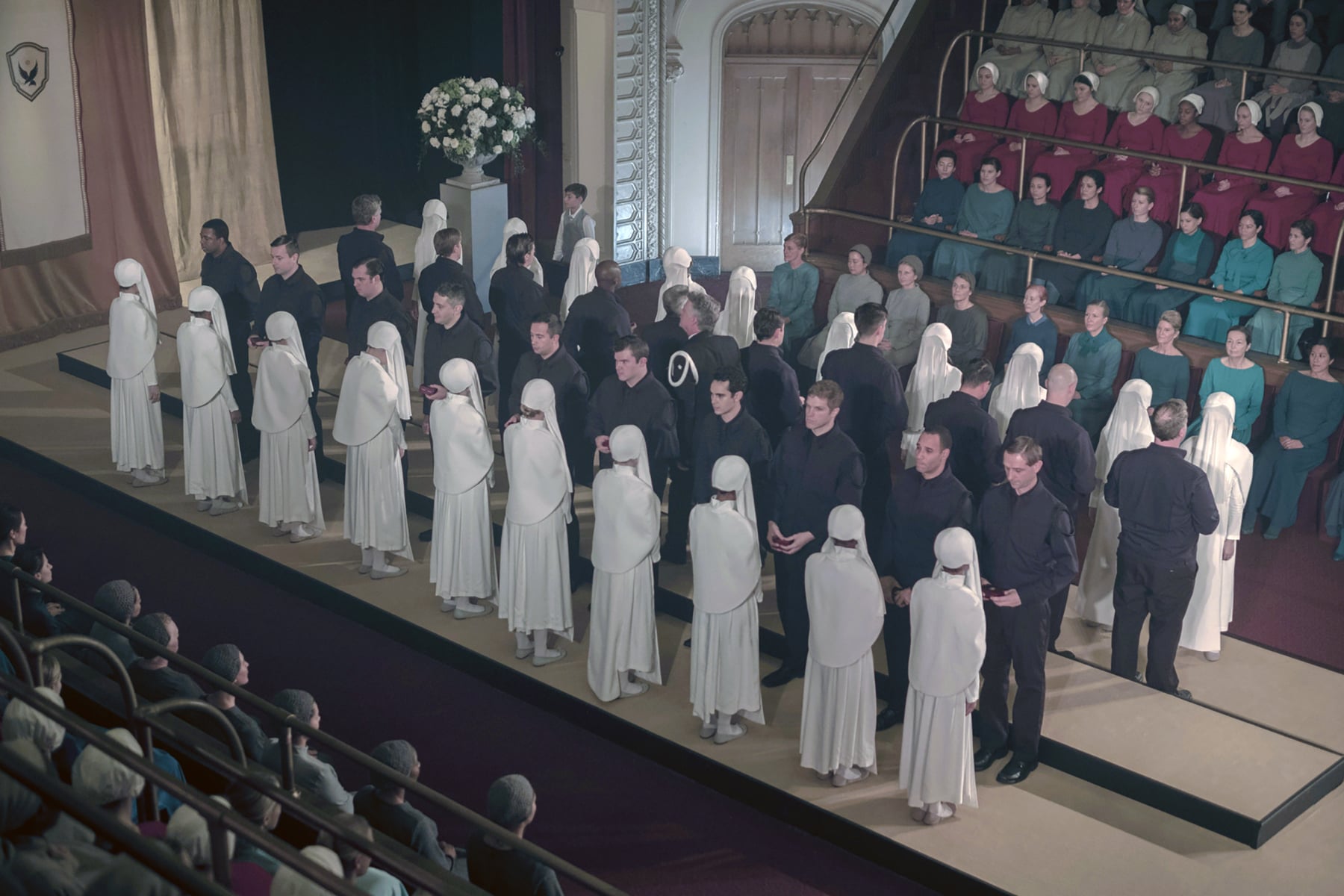 But it's not just the color of the handmaids' clothing that has something to say on The Handmaid's Tale. Crabtree said that the brownish green of the aunts' clothes is meant to convey a militaristic degree of authority, calling back to the military uniforms of World War I, while the dull, pale green of the Marthas is meant to evoke a sense that these women are "wither[ing] into their environment."

It's also worth noting that while a vibrant green could evoke feelings of life and lushness, the greens given to the aunts and the Marthas seem to indicate the opposite. The aunts' darker, drab greens are like something old and decaying, the green of something once alive, but now left to rot. The Marthas, on the other hand, are clad in a hazy, sickly green, like plants starved of water and sunlight that are now fading slowly to dust.

And yet, as we learned at the end of season two, the green of the Marthas' clothing may also be a sign of new growth and deep roots. The whisper network of the Marthas is what enables June to smuggle her infant child out of Gilead and will surely come into play again as the resistance gains strength.

And then there's the wives, always clad in teal. In season one, Crabtree used shades of blue to indicate which of the wives carried the most power, with those higher up dressed in darker shades. It's a beautiful color, but one that may also belie the inherent tragedy of the wives' existence. After all, although the wives are indeed a big part of the problem and actively work to oppress the other women of Gilead, it is not, as season two makes abundantly clear, a system designed to work in their favor. The power of the wives is, in most ways, an illusion; while they think of themselves as free, they are ultimately just as much at the mercy of their husbands as the handmaids or the Marthas.

Whether it's glimpses of red giving us a thrill of resistance or shots of deep blue flooding us with oppressive melancholy, the clothing of the women of Gilead has something to say, and it's growing louder with every episode.

Now, as we move into a season in which Serena, the show's most prominent wife, seems to be becoming increasingly more aware of the truth of the world she has helped create, the teal of her clothing may have a number of conflicting meanings. It is still a beautiful, powerful color, much like Serena herself. But it is also the color of tears, the color we associate with sadness and depression when we say someone is "feeling blue." Blue is the color of water, which may look tranquil and unobtrusive at first glance, but has the power to erode and wash away and to choke the life out of anyone who slips beneath its surface, sometimes so quietly that no one even notices until it is far too late. The wives may look lovely in their crystal cages, but once they realize they've trapped themselves, their blue may become suffocating, drowning them under an ocean wave of their own making.

In season three, we also meet the widows, who wear purple, the color awarded to soldiers wounded in battle. And the women in Gilead are indeed locked in battle, every last one of them, even though many of them don't quite realize it yet. Some, like June, have been fighting tooth and nail since Gilead's earliest days, fully aware of the dangers of a society that views its women as commodities. Others, like Serena and Aunt Lydia, have mostly been fighting for whatever scraps of power they can amass for themselves, even if it means stepping on the necks of other women to get there. And then there are the Marthas, who have been quietly fighting for far longer than anyone has realized, relying on the unnoticed whispers of invisible women to protect one another from all too visible horrors.

We don't know yet what form the battles of The Handmaid's Tale will take in the remainder of season three and beyond, or how the women both in and outside of Gilead will react to the new challenges they will face. Whatever happens, expect color to continue to play a significant role. Whether it's glimpses of red giving us a thrill of resistance or shots of deep blue flooding us with oppressive melancholy, the clothing of the women of Gilead has something to say, and it's growing louder with every episode.