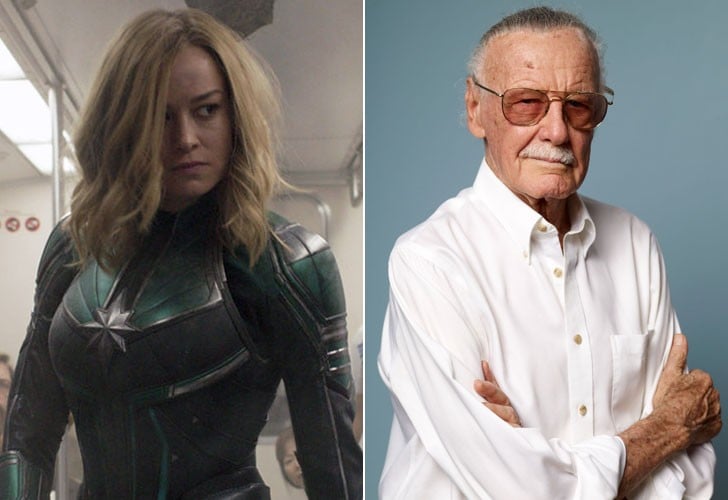 Bring Tissues to Captain Marvel, Because Its Bittersweet Stan Lee Tributes Will Make You Sob

There's a lot about Captain Marvel that will make you ooh and ahh: its dazzling CGI fight scenes, Nick Fury's hilarious one-liners, and, yes, Goose the "cat." But there are also two specific points in the movie that will leave Marvel fans in a pile of emotions, all thanks to the film's bittersweet nods to comic-book legend Stan Lee.

The comic-book writer, editor, publisher, and producer created some of our favorite superheroes, which is why the 95-year-old's death in November 2018 came as such a devastating blow to longtime fans. But fortunately, much of Lee's legacy continues to live on, including one of his cheekiest traditions: his many, many cameos in superhero films. Over the years, Lee has racked up well over 30 appearances in films like X-Men, Iron Man, and even 2018's Spider-Man: Into the Spider-Verse, ranging from blink-and-you'll-miss-them moments to quirky bit characters. Now we can add a brief appearance in Captain Marvel to the list.

Earlier on in the movie, soon after Brie Larson's Carol Danvers crash-lands on Earth, she engages in a dangerous chase with a Skrull — a shapeshifting, intergalactic enemy — across Los Angeles. They end up on an above-ground train together, where the alien takes the form of an older woman (which you can see in the film's trailer). But before she spots the Skrull-in-old-woman-clothing, Carol stares down an elderly man reading a newspaper. Who is it? None other than Stan Lee, of course, who lowers the paper to grin at the ass-kicking female hero.

Related:
A Look Back at All 37 of Stan Lee's Cheeky Cameos in Superhero Movies

However, it's also important to note that the train scene isn't Captain Marvel's only tribute to Lee. Before the movie even begins, it's revealed that Marvel's usual intro — which sees comic strips flip on screen before highlighting specific MCU heroes — has been tweaked to honor the comic legend. Rather than adding Carol to the lineup of heroes who usually flip across the screen, all of them were replaced with images of Lee from his various MCU cameos, including Guardians of the Galaxy, Captain America: Civil War, and Thor: Ragnarok.

It's an unexpected and surprisingly touching moment that has already reduced plenty of Marvel fans to tears. People who have seen the film have been sharing their emotional reactions to seeing Lee on screen in both Captain Marvel moments, which you can take a peek at ahead.

Previous Next Start Slideshow
Stan LeeMoviesCaptain Marvel
Around The Web