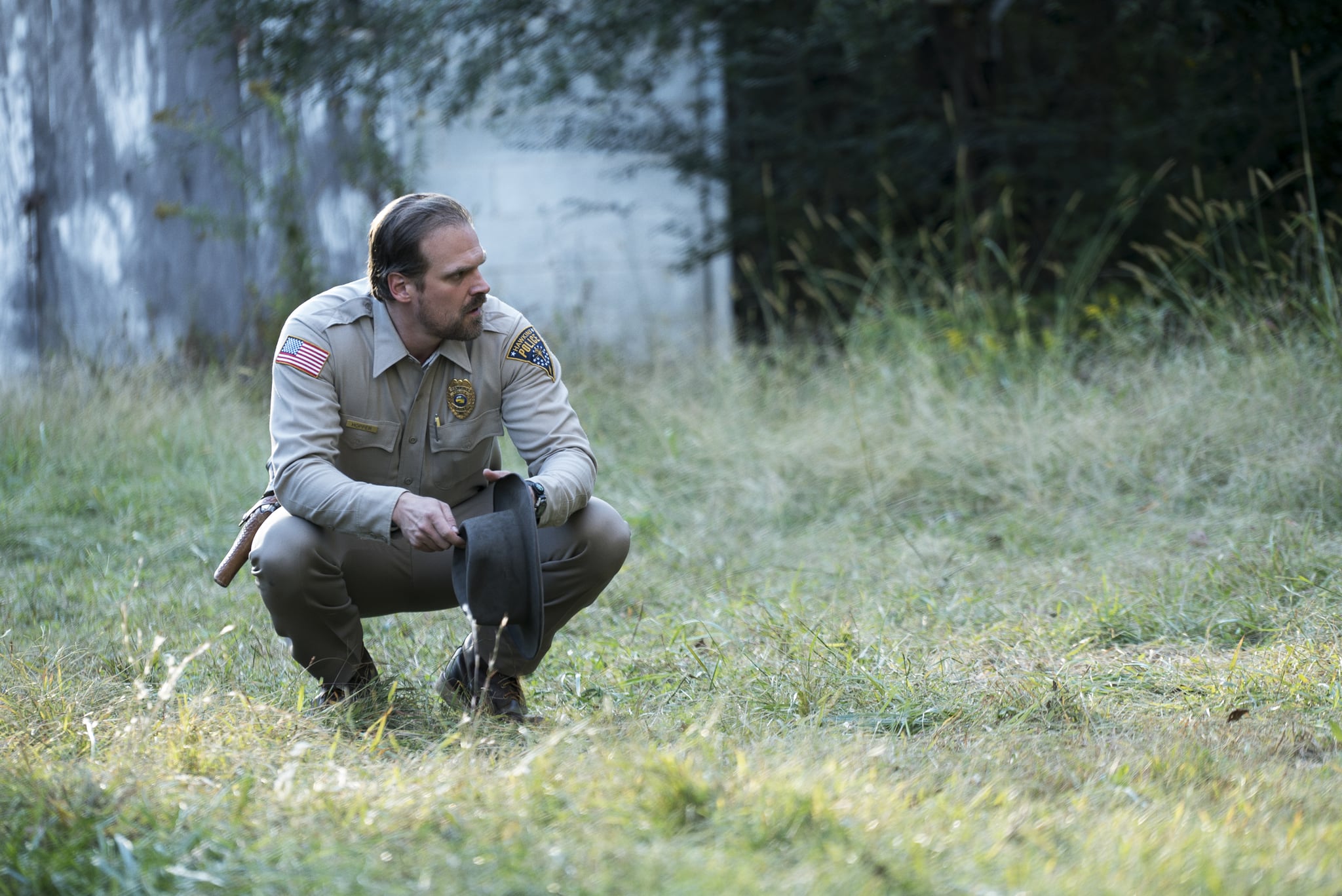 Thanks to a heavy dose of mystery and some nostalgic teasers, Netflix's Stranger Things has quickly become one of the most highly anticipated shows of the Summer. Since we couldn't deal with the suspense any more, POPSUGAR tried to pry a few fun secrets out of David Harbour and Millie Bobby Brown, who respectively star as a gruff, apathetic police chief and a little girl named Eleven who may or may not be able to move things with her mind. From discussing the perils of trying to squeeze into polyester pants to exactly which episode of the first season will have your jaw on the floor, we're more pumped than ever to bingewatch the show this weekend.

POPSUGAR: A few horror/sci-fi TV shows and movies with an '80s vibe have popped up lately, like It Follows and Wayward Pines. What do you think will make Stranger Things stand out from them, since tonally it's pretty similar?

Mille Bobby Brown: I find that it's a very independent show, with the different sort of traits that you don't find in the movies. It has things from Stand By Me, The Goonies, E.T., and stuff, but it's still all very independent, and very, very different. We didn't want to copy Spielberg, or Stephen King. We wanted to make it our own, and we did.

David Harbour: It starts off very simply and small, but what it spirals into in terms of the twists and turns in [episodes] three and four, and all those things that happen, are really crazy and really inventive. Also, I think that the characters are pretty unique and complex. You get to see a lot of different layers to these characters peeled away as you go on. In an eight-hour project, you get a chance to see a lot more of characters, how people behave, and why they do the things they do.

PS: What would you say is the biggest thing that die-hard fans of the genre have to look forward to?

MB: It has what my character deals with.

DH: Yeah, it's got some telekinesis in it.

MB: They can look forward to that, because there are some different perspectives on things. Some people don't like horror, and some don't like sci-fi, but it really blends every genre, and it's great. It's for every age range, every person in the whole wide world.

DH: I love the sci-fi stuff in it. It sort of works on three different tracks. You have these kids searching for their friend who's missing, and they encounter Millie's character, who has some kind of ESP, some kind of telekinesis power. Then you have the adults who are looking for the kid through the government aspect, and there's a big government conspiracy going on. They start being lied to. Finally you have the teenagers who, through Jonathan's photos and photography, have seen the shades of some kind of beast, some kind of monster that exists out there in the world, so they're searching for the answers to what that is. You have these three different tracks of sci-fi stuff, and they all converge as the series goes on. It's pretty interesting stuff.

PS: What has been the most interesting part of creating the show so far?

DH: As an actor, what surprised me are these guys who created the show. In my mind, they're children. I guess they're 30. [laughs] They're just wildly nerdy, creative, dorky, little Magic the Gathering, Dungeons and Dragons-type guys, who have these incredibly imaginative fantasy world in their heads that they translate to the page, and to the screen. Their imagination never ceased to amaze me. So, you know, a lot of times you can read a script and think, "Eh, I can probably write something better than that," or "We should work on this." But every time we'd get these scripts, they would exceed my expectation of the episode. I wouldn't know where stuff was going, so that was so surprising to me. That these kids, who haven't done a tremendous amount, could write, create, and film scripts like this was really impressive to me. 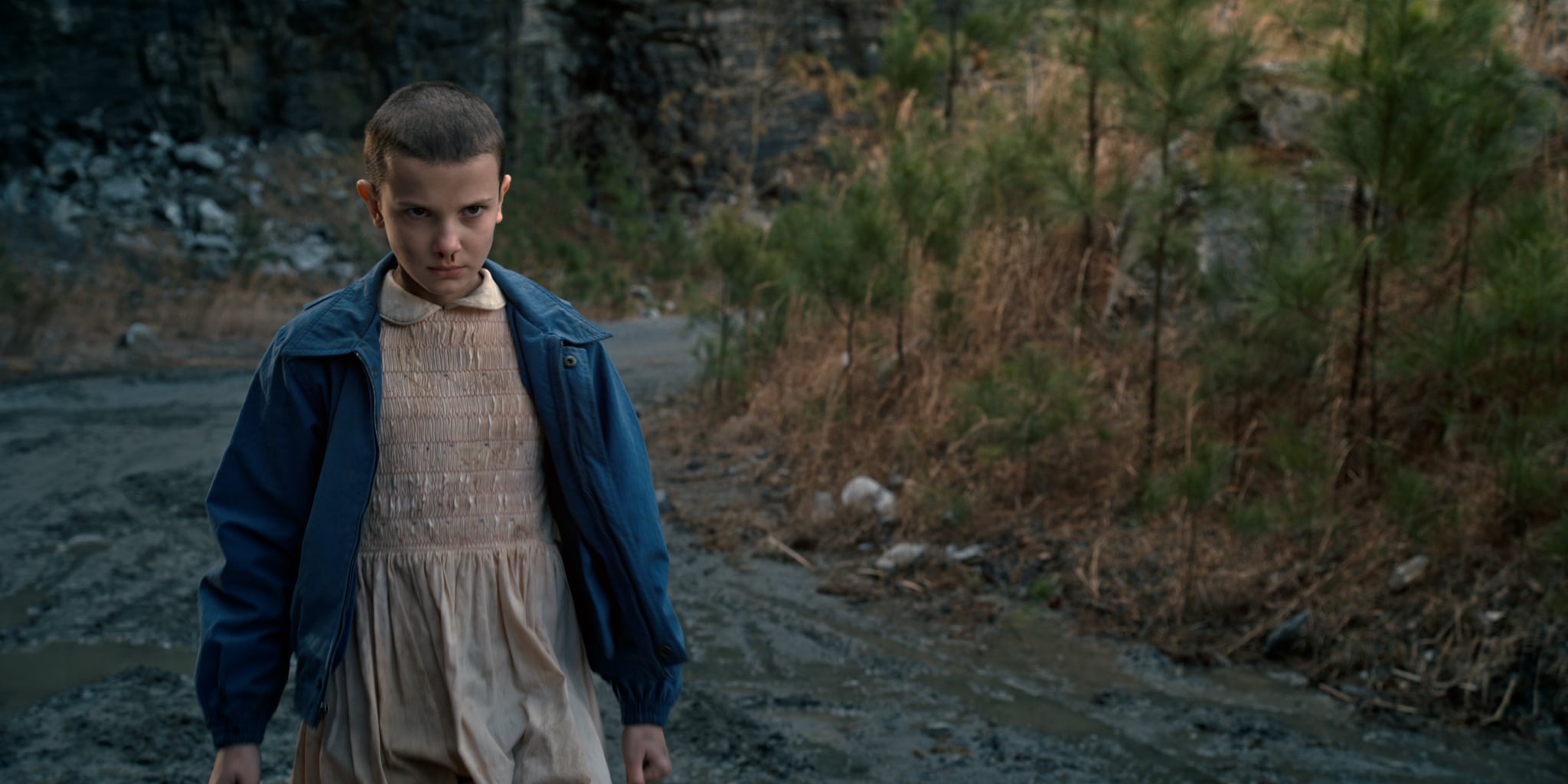 PS: So we can definitely expect some twists and turns throughout the series?

MB: That third episode is like a turning point. Like, "Oh my god, this is such a great show." You've gotta stick with it. When you stick with it, it's amazing. You actually start to connect with some characters in the show. The thing that was actually really great for me is the actors and talent that they brought to the show, like Winona [Ryder] and Matthew Modine and David and all the kids. I looked up to the teens, I looked up to the adults. Me and the boys have a great friendship, and I love that sort of connection that we each have with our characters. As soon as we hit the set, it's all business.

PS: Was there anything in particular that you guys did to get into the mindset of playing a character from the '80s?

DH: I grew my hair uncomfortably long. The Mark Spitz hairstyle of the '80s is alive and well in our show. There was a lot of facial hair growing and lot of hair growing. A lot of squeezing into polyester pants, as well. Very fun.

DH: It was fun to think in that time period, too, to start to imagine a person living in 1983. If my guy is 40 years old in 1983, then he was born in 1943. He was born during WWII, and probably served in Vietnam. There were lots of different elements of history that I went into and started to piece together for a backstory for this guy. There was so much that I learned that in my normal day, if I'm playing a character in 2014 or whatever, I don't necessarily have to go into. There was a lot of room for layering that you could do with that, which was fun.

PS: Was there anything that drew you to your character right off the bat?

MB: Obviously, my powers! That was a great part of my character. I loved the head shave, too.

DH: For me, as an actor, you get that question a lot. Like, what drew you to the role. But most of the time, the answer is they were going to pay me, they were gonna shoot me on film. This, though, truly did feel different, in the sense that when I got the script, I really went after the role. I feel like the writing was so good. The dialogue is so good. The character is like a lot of these difficult people in television now who we get to watch be compromised in certain ways, and have to develop their own code throughout a story . . . who have to find themselves. That's what I think Hopper gets to do. When you meet him, he's just shut down completely and given up on life. How he struggles against this thing is a really compelling story to tell, and a lot of times you don't get scripts with those kind of characters in them.

PS: After seeing the first episode, it's clear that the show is going for an authentic kind of scare. It was more terrifying because of what I didn't see, rather than having a big CGI monster in my face. Will the show continue to fuel that fire throughout later episodes?

DH: I have a real problem with CGI, although it is getting better. Sometimes it looks great, but I remember seeing and liking movies like Spider-Man, the Sam Raimi one, where you see Peter Parker swing around buildings, but there's no gravity. I feel like gravity is such an important concept. You can swing from a rope, but if you fall off the rope, SPLAT. Gravity exists. I always feel with CGI that the physics are a little bit too playful. The physics don't have the real-world qualities. A lot of what these guys are trying to do is eliminate that. We have a puppet, a guy in a suit, who's crawling around. laughs A lot of that practical stuff ends up being scary because there's real claws, and there's real weight to this thing. It can really hit you. That gives it a certain power. I mean you can augment that with some CGI stuff, but it's fun to have the practicals, and I feel like we've lost a lot of that. I miss that. Even crazy claymation stuff, from Clash of the Titans, I find that scarier for some reason. It puts you in a world, it really does. It gives you real things to hold on to. I love that they chose to do things that way.

MB: It's funny, my mom said the same thing. She was on set, and she said, "I don't want this show to just be like, 'there's a monster!'" That would be so cheesy. But the show is genuinely scary. It doesn't have that cheesy CGI to it. It has that sort of, 'Oh! This is actually real, and it's going to come and hurt you.' It's scary and gets you into that character. It looks so real.

DH: Another thing is that, like in Jaws, you rarely see the monster. I remember when I saw Poltergeist for the first time, and you just see that little girl in front of the television being like, "They're here," is terrifying. You don't need CGI to create this dread in a dark room. Our primal fears are a lot more stimulated by the unknown than by the known. I think Stranger Things is really skilled at having this unknown force. In the first scene of the show, you never see what drags that scientist away. You never see what takes him. It's still pretty creepy.