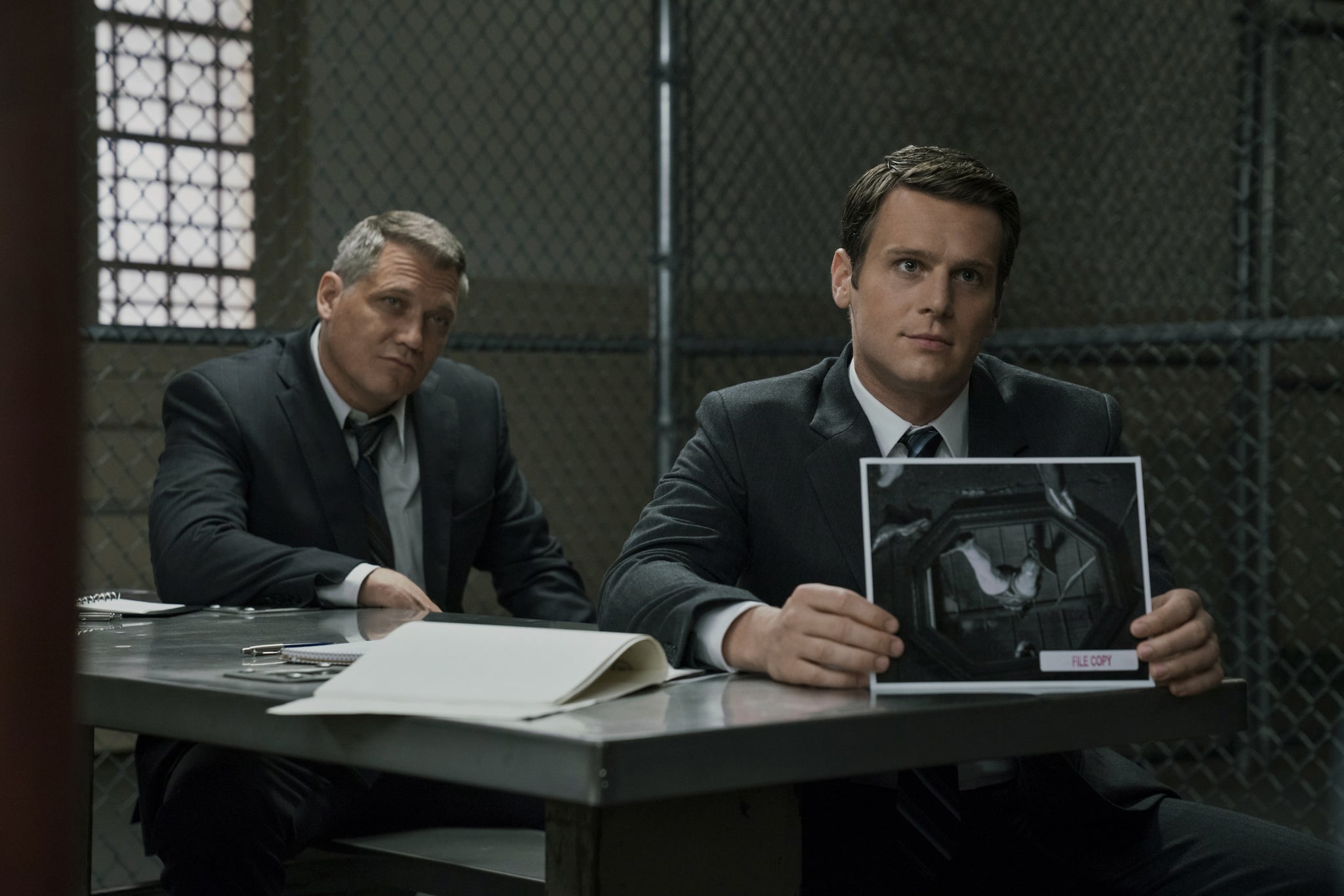 Ed Kemper got to me. Well, technically, Cameron Britton's creepy portrayal of Ed Kemper in Mindhunter got to me, but when I fell into my go-to true crime rabbit hole and looked up the real-life serial killer featured in the Netflix series, it might as well have been the same guy. After bingeing Mindhunter over two days, I couldn't stop thinking about the man who viciously murdered and mutilated 10 people, including his own mother, in the 1960s and '70s. I had trouble sleeping.

Of course, when I step back and think about it, I wonder how any of us are sleeping soundly considering the treasure trove of true crime entertainment we all seem to be devouring. There's Law & Order True Crime: The Menendez Murders, My Friend Dahmer, American Crime Story, and the upcoming The Devil in the White City adaptation starring Leonardo DiCaprio as infamous Chicago killer H.H. Holmes, to name just a few.

There are entire channels devoted to cold-blooded crimes — and they're some of TV's most watched, especially among women (Investigation Discovery ranked No. 1 in average length of tune-in in 2015). It's nearly impossible to make small talk with coworkers or friends if you're not caught up on the latest episode of The Keepers, or The Jinx, or Serial. News networks and magazines get in on our obsession, too, using the anniversary of the Jonestown Massacre or Charles Manson's death to churn out new sensational specials or features. Even for true crime superfans, it's a lot. But just how much of this stuff is too much?

"We all love playing couch detective, but in an era marked by terrorism and political tension, using these kinds of programs as a way to escape from reality — yes, even though they're also stories based on reality — can be satisfying."

There's some evidence that grisly entertainment in some forms can be therapeutic, which might help explain why we keep subjecting ourselves to it. We all love playing couch detective, but in an era marked by terrorism and political tension, using these kinds of programs as a way to escape from reality — yes, even though they're also stories based on reality — can be satisfying. Taking in accounts of human depravity in a controlled environment like your living room is exciting in a twisted way. It releases adrenaline. Criminologist Scott Bonn described the experience in Psychology Today as a sort of "guilty pleasure," though there's been a push in the past few years to drop the guilty part and "own" our fandom.

Take Murderinos, otherwise known as devotees of Karen Kilgariff and Georgia Hardstark's popular podcast My Favorite Murder. There's a running theme on the show and in the online communities it's spawned that being drawn to true crime is nothing to be ashamed of, particularly if you're a woman. Kilgariff and Hardstark take an empowering approach, emphasizing often-overlooked victims and mental health, and using humor to rob frightening killers of their power.

Hardstark described their talk-through-it style in The Atlantic as "a lot like exposure therapy, where you have to confront your fear to prove that it can't actually hurt you."

LA-based clinical psychologist Erin Joyce says using true crime to face your fears may be helpful for some people, but it also can create more anxiety.

"The risk in watching these shows and trying to face your fears on your own is it may have the opposite effect," Joyce told me. "It could make you feel less safe or more concerned about your safety."

One study showed people faced with sensationalized negative news stories about crime or war reported feeling more anxious and sad. According to Joyce, who specializes in women's mental health issues and says she's a true crime fan herself, with true crime content, those effects could be even worse as we usually watch for extended periods (i.e. a Forensic Files marathon).

Bingeing on serial killer shows might also be problematic if it gets to a point where you start becoming desensitized to them. "If you were to watch a horror movie, the first time you saw it would probably be the scariest," Joyce said. "The second time would probably be pretty scary, too. But if you were to watch it like 50 times, eventually it would actually be kind of boring." Seeking out more intense or graphic shows or podcasts might be a sign that your hobby is becoming unhealthy.

"It's understandable that many of us may be living in varying degrees of fear that something like this could happen to us."

Women may be more vulnerable to certain true crime-related anxieties. For one thing, women are more likely to be drawn to true crime entertainment in the first place. And while statistically they're actually less likely to be victims of violent crime, research suggests women are more afraid of being attacked. And why wouldn't we be? Between the current flood of stories about high-profile predatory behavior toward women and the victims of some of the most famous and gruesome murder cases being women, it's understandable that many of us may be living in varying degrees of fear that something like this could happen to us. Victims of past trauma, Joyce said, can be particularly susceptible to these fears.

Joyce says when the stories start getting in the way of your life, it's time to take a break, and if it's severe, consider talking to a mental health professional: "If you're finding that you're spending an increasing amount of time thinking about what you see on the shows and it's hard to get these things out of your mind, or you're thinking about possible bad things that could happen to you . . . that's typically a sign that it's getting to be too much."

Certain show formats or elements may be more triggering for certain people. Maybe seeing crime scene photos on TV is more upsetting to you than listening to a podcast that talks about them. The sense that looking to real-life stories of human suffering for "entertainment" is callous or disrespectful might also contribute to an overall sense of viewer unease. Recognizing the way something may be personally affecting you is key.

Instead of further freaking yourself out, Joyce recommends turning off anything that's getting to you and spending time with friends, or exercising outside. Mindfulness meditation where you focus on your surroundings and reinforce feelings of safety can help, too. If you use true crime as a way to work through underlying fears, try taking a self-defense class or attending an educational seminar on the topic.

And maybe stretch out your Mindhunter season two binge over more than two days.