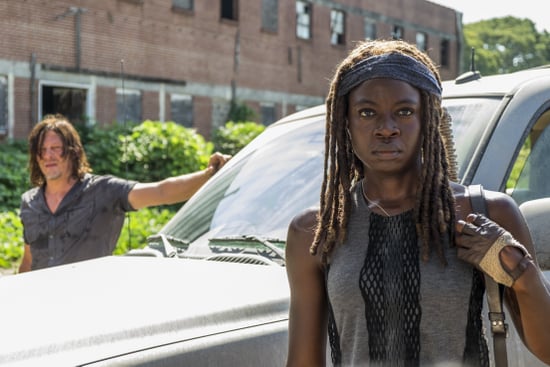 Warning: spoilers for The Walking Dead ahead.

There's a throwaway line during a big action scene in Sunday night's "The King, the Widow and Rick" episode of The Walking Dead that we're likely to hear more about before the end of this season. Michonne (Danai Gurira) and Rosita (Christian Serratos) sneak into a warehouse where two Saviors are talking about Rick's attack on the Saviors' compound.

"Whatever happened, whatever is happening," one of the Saviors says, "Rick the prick or whoever, he don't know sh*t about the fat lady here. What's been done can be undone real quick."

Soon after, Michonne accidentally kicks a ball that rolls up to where the two Saviors are standing, and then all hell breaks loose. Michonne — still recovering from injuries from the last big battle — has a stick fight with the lady Savior. Rosita vaporizes the gentleman Savior with a shoulder-mounted missile ("Baby girl, you're not gonna use that thing." She totally used that thing.) The lady savior takes off in a pickup, and Daryl (Norman Reedus) T-bones her into oblivion with a dump truck.

It's likely not the shoulder-mounted firearm that Rosita shot in the warehouse. When Negan refers to "the RPG [rocket-propelled grenade] stashed at the cache" in the previous episode ("The Big Scary U"), he doesn't call it "the Fat Lady." The RPG he's talking about is almost certainly the weapon that Rosita used, and "the Fat Lady" is almost certainly something bigger.

Later in that episode at a meeting of the Saviors leadership, Regina (Traci Dinwiddie) pitches a plan to break through the swarm of walkers surrounding the compound. "We use the workers as a distraction to get a small team past the herd," she says. "They can warn the outposts and then come back with the Fat Lady." That sounds like something the Saviors need to defend themselves.

Related:
The Walking Dead: The Plausible (and Disgusting) Reason Father Gabriel Might Be Sick

Could "the Fat Lady" be the helicopter that Rick saw in that episode?

That wasn't one of the three possible explanations we offered after "The Big Scary U," but references to "the Fat Lady" in back-to-back episodes certainly mean it's something. And it likely has significant military value — an armored vehicle, a bomb, possibly that helicopter — to Negan and the Saviors, who are trapped in their own compound by hundreds of starving walkers.

Whatever it is, it's in that warehouse. The Savior lady said as much, and Michonne takes a ponderous look — harbinger alert! — back at that building before she and the others leave. "The Fat Lady" is in there, and we're likely to see it before season eight is over.