You may have read Lois Lowry's critically acclaimed book The Giver back in high school, but do you actually remember any of it? The movie adaptation, starring Jeff Bridges and Brenton Thwaites, will be out this Friday, so it's time to brush up — or learn about it for the first time. Here's everything you need to know, and once you're caught up, check out the trailer. 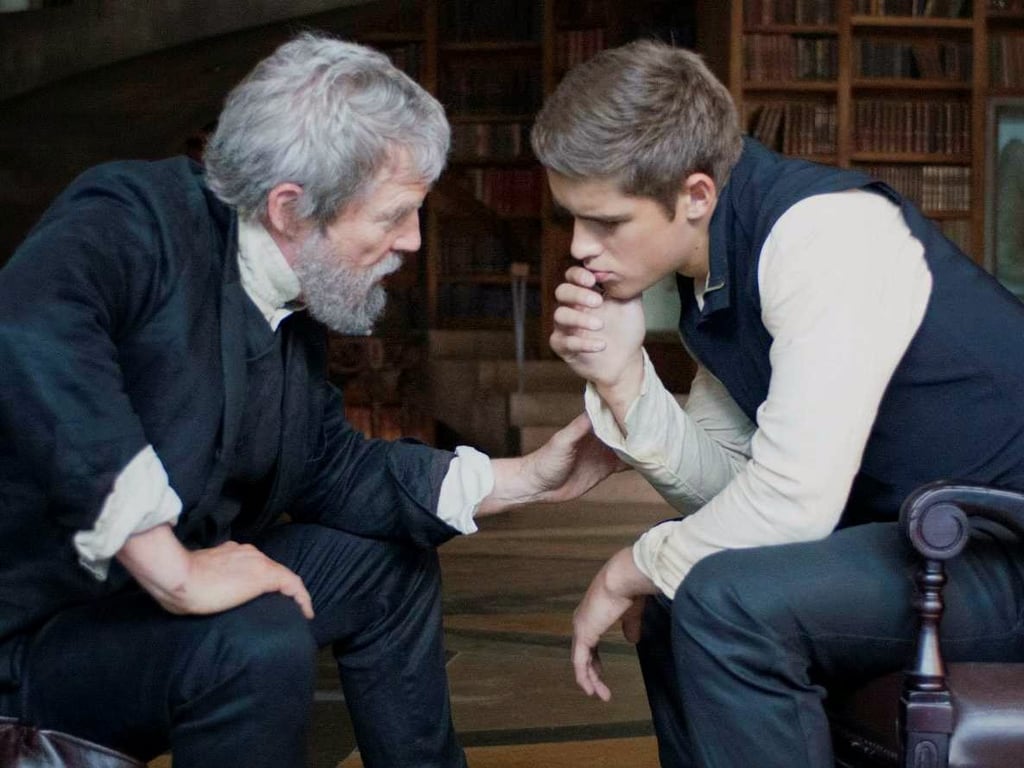 The Giver is set in a dystopian society in which all people are basically the same. Residents are committed to preserving "sameness," because being different is dangerous. As a result, there is little to no individuality, and everyone is assigned a job that will best serve the community.

What if they're not into their job?

Then they're "released" from society, which is a mysterious way of saying they're banished. No one really knows what happens outside of the community, so it's the ultimate punishment.

OK, so who am I rooting for here?

The main character is Jonas (Thwaites). In the book, he's only 12, but he's an older teen in the movie (Thwaites is 24 in real life). We meet him as he comes of age to be assigned a job in their community. While his peers get normal jobs, he is assigned to be the new Receiver of Memory.

What's the Receiver of Memory?

Basically, he's the old man on the cover of the book. When the society was formed, it was agreed that all the memories had to be banished — but they had to go somewhere. So for years, there has been just one person who would hold all the memories, good and bad. He is also known as The Giver and played by Bridges.

How does that even work?

It sounds weird, but Jonas lays on his stomach, and The Giver transmits these memories by placing his hands on Jonas's bare back. Suddenly, Jonas can see and feel snow, scenes of war, and passion. No one in his community has ever felt, or will ever feel, these feelings. The burden is his alone to carry.

Who is this Brenton Thwaites anyway?

He's an Australian actor probably best known for being on Home and Away, that soap opera Chris Hemsworth was on. This year, he starred in Oculus, and you saw him as Prince Phillip in Maleficent.

I heard Taylor Swift is in this movie.

Yep. She plays Rosemary, The Giver's daughter. Meryl Streep also stars as a Chief Elder, Katie Holmes is Jonas's mother, and Alexander Skarsgard is his father.

I'm not really understanding what the problem is.

As Jonas keeps receiving memories, his awareness grows. He understands feelings and emotions more and begins to appreciate the value of life. This doesn't fit in with the idea of "sameness," and he starts to question life entirely. This becomes especially relevant when Jonas's father brings home a baby (aka a "newchild") from the nursery because it might get "released."

What does that mean for the baby?

This picture kind of implies that it might be OK.

Jonas has a crush on a girl named Fiona. Only no one is really taught about sex, and at the first sign of puberty and sexual maturity, everyone is given a pill to sedate those feelings.

Wait — then how are babies made?

"Birthmother" is a job assignment that is given to girls who aren't very smart. They have a baby, then the baby is given to a family unit. The Birthmother is then given a crappy job, and the kid grows up with parents who raise it until it becomes self-sustaining. Then the parents go live with the other Childless Adults until they move into the House of the Old and are eventually "released." And we've come full circle.

by Sydni Ellis 43 minutes ago