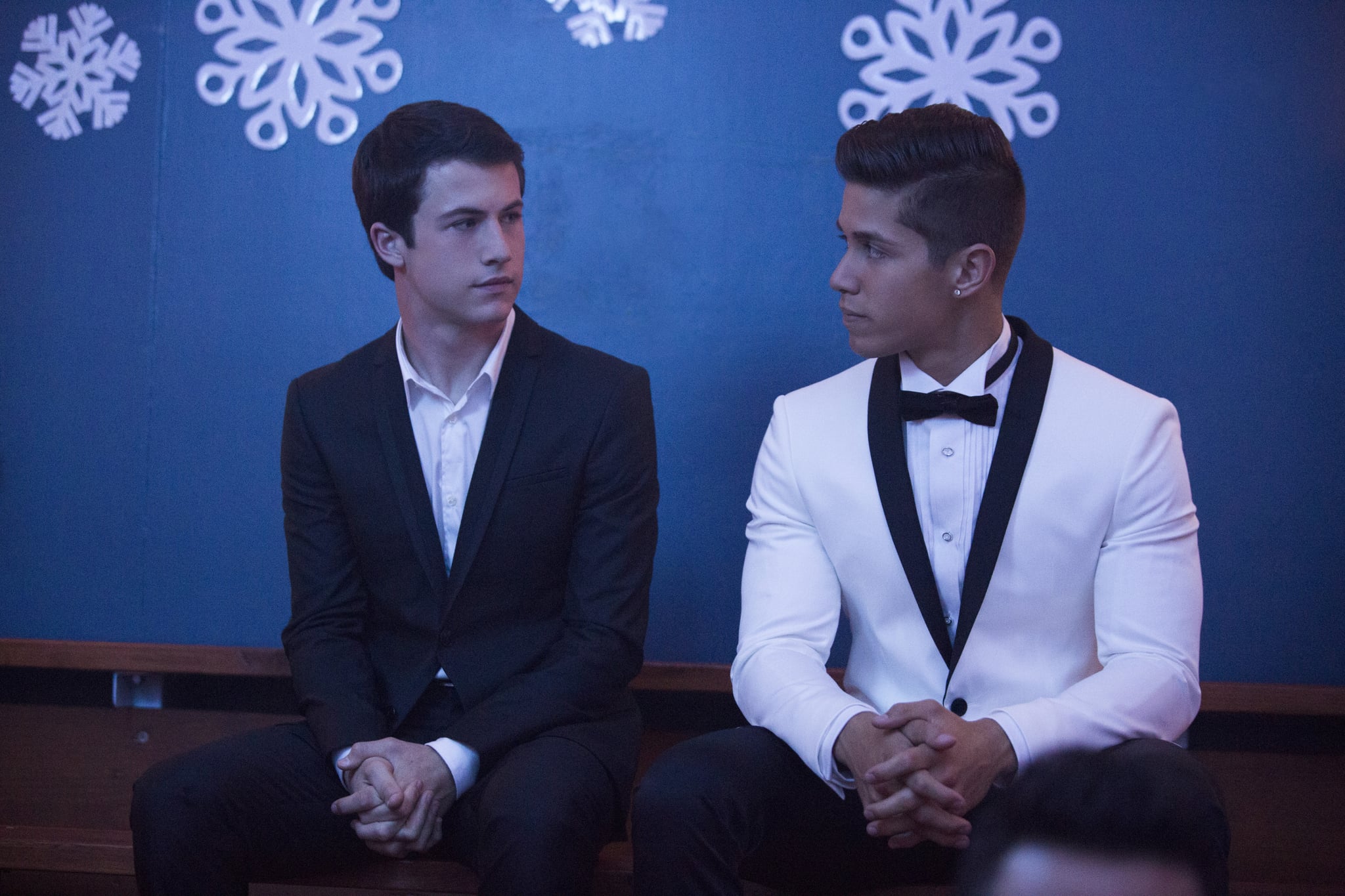 Still reeling from the loss of Jeff Atkins? So are we. With all of the flashbacks and dream sequences, 13 Reasons Why offers a lot to think about when it comes to Liberty High's star pitcher. For instance, did you realize Jeff's car accident happens prior to the events in the first episode? If you rewatch the season, you'll find Jeff only appears in Clay Jensen's flashbacks. Moreover, Jeff's death is the one Principal Bolan and many of the students are referring to when they mention a drunk-driving incident that rocked the community.

Because Jeff is mentioned in season two, you may want a refresher. Let's break down the six tapes that explain exactly what happened to Jeff Atkins.

Jeff makes his first appearance in the third episode. He sits in the library with Clay, his peer tutor. At first, the scene takes on the mundane appearance of high school life as the two argue over the proper use of the word "unique." However, the scene establishes two things: unlike most of the popular kids at Liberty High, Jeff's not quick to make harsh judgments about his classmates, and he's open to offering Clay advice about women.

The next time we see Jeff is in one of Clay's dream sequences. The pair meet on the bleachers during the Winter Formal and watch Hannah Baker sitting alone on the other side of the gymnasium. Jeff encourages Clay to dance with Hannah, but the dream then turns dark. Jeff stands in the bleachers, bleeding from his forehead, while he mocks Clay. The image is brief, but the moment hints at Jeff's fate and foreshadows Clay's emotional devastation.

Later in the episode, we once again see Jeff at the Winter Formal — but this time we experience a version of the truth through the combined perspectives of Hannah's tape and Clay's memories. While the boys argue about dancing, we learn Jeff made a bet that if he got a "C" or better on his next history paper, Clay would attend the formal. The detail seems trivial in the moment, but the information establishes that the pair have formed a bond. More importantly, we see Jeff's first official act as Clay's matchmaker, a task he continues until the night of his death.

For those with sharp eyes, this tape is the most revealing when it comes to Jeff as a permanent fixture of the past. His scene opens on Clay's comment to Sheri Holland: "I used to be a peer tutor." In that moment, Clay stops to look at the library station he shared with Jeff during their study sessions. The camera pans over Clay's shoulder, and we see a flashback of the two boys sitting across from each other. Then the perspective changes so that the guys are in the foreground and present-day Clay is in the background. Even though the scene revolves around a discussion about the Dollar Valentine Survey, the abnormal angles and perspectives highlight the remorse Clay feels for the loss of a friend he didn't even realize he had.

This is the first tape to directly refer to the circumstances surrounding Jeff's death even though we see very little of him in the episode. The thing that we do see is Clay running down the street at full speed. At the time, we don't know why he's running. However, the narration laid over the image is Hannah's recorded voice: "If I'd known what would happen, what that night had in store, I might never have walked through that door." She sets up a timeline that indicates three ominous things are on the horizon. The image of Clay running ties directly into one of them — Jeff's accident at the corner of Tanglewood and Bay Street.

In the 10th episode, we're given the full story of Jeff's death. The episode opens on the scene of his accident. The camera pans over the broken stop sign toward two cars in the distance. The sequence of events haven't been made clear yet, but we can see that Jeff's car has been T-boned by another vehicle, which would indicate that he ran the stop sign. Then the camera moves in closer to reveal Clay talking to a police officer, and we realize that he must have been first on the scene.

But we're getting ahead of ourselves here, so let's rewind.

The events of this tape occur on the night of Jessica Davis's party. For the sake of brevity, we'll fast forward through the non-Jeff parts. Essentially, Clay and Hannah get into an argument. This causes Clay to leave the party prematurely, and Jeff attempts to keep Clay around by inviting him on a beer run.

Nonetheless, Clay decides to walk home, which gives us our first and only solo moment with Jeff. We follow him back into the party where he asks Sheri to move her car so he can pull out of the driveway. This is how his death connects with the narration on Hannah's tape.

As Sheri leaves the party, she notices Hannah sitting at a piano and offers our heroine a ride home. Unfortunately, the girls crash into a stop sign when Sheri gets distracted by her cellphone charger. Hannah insists they report the incident, but Sheri refuses and leaves Hannah stranded on the side of the road. We know at this point that the downed stop sign is the same one from the beginning of the episode, and our stomachs knot as we put the pieces together.

Related:
How Old Is the Cast of 13 Reasons Why? An Age Investigation

Cut to Clay sitting alone on a playground where he hears the distant screech of wheels and a violent crash.

Then the episode leaves us in suspense for a few moments as Hannah goes into the Blue Spot Liquor Store to make a 911 call. That's where the story attempts to fake us out by indicating the police already received a call about an accident. Sadly, though, the truth trickles to the surface — Jeff died at the same intersection where Sheri demolished the stop sign.

In a touching scene with Jeff's parents, Clay tells them the truth about that night: "I was the first person to get there. I was walking home, and I heard the crash. I found Jeff. I found him. I don't know — I thought — I thought maybe I'd try CPR. Something. I don't know. It was me. I'm the one that called 911."

Clay then confesses he didn't think Jeff was drunk that night. As he says these words, the images that follow show Jeff dead in his car with alcohol bottles strewn across the floor and passenger seat. We know from earlier in the tape that the drinks don't belong to Jeff — they're actually part of the stash secured on his beer run. So for those of you who were worried, the accident wasn't Jeff's fault. The downed stop sign set the entire scenario into motion, and Jeff Atkins was the unfortunate victim of fate.

In case you've forgotten, this is Clay's tape. BUT when we look at the storyline through the filter of Jeff Atkins, this episode feels like an homage — a chance to say goodbye to the only popular kid at Liberty High who lived with compassion and decency.

The backdrop is still Jessica Davis's party, although this time we watch Jeff use the threat of torture and a wonky baseball metaphor to broker a connection between Clay and Hannah. In fact, Jeff's guardian-angel-like matchmaking skills are in full effect when he bluntly states, "Go talk to her, man. You're the reason she came." Not to mention, he suavely intercepts the beer-pong-loving interloper, Troy, who threatens to torpedo the couple's intimate conversation. And since the details of the accident transpire on the previous tape, we leave Jeff Atkins on this generous note.

For those of you still brokenhearted about the loss of our hero, take heart. We do get a brief appearance from his character in the seventh episode of the second season, but don't expect a new storyline. Just think fond thoughts of our beloved Jeff and know that he deserved better.