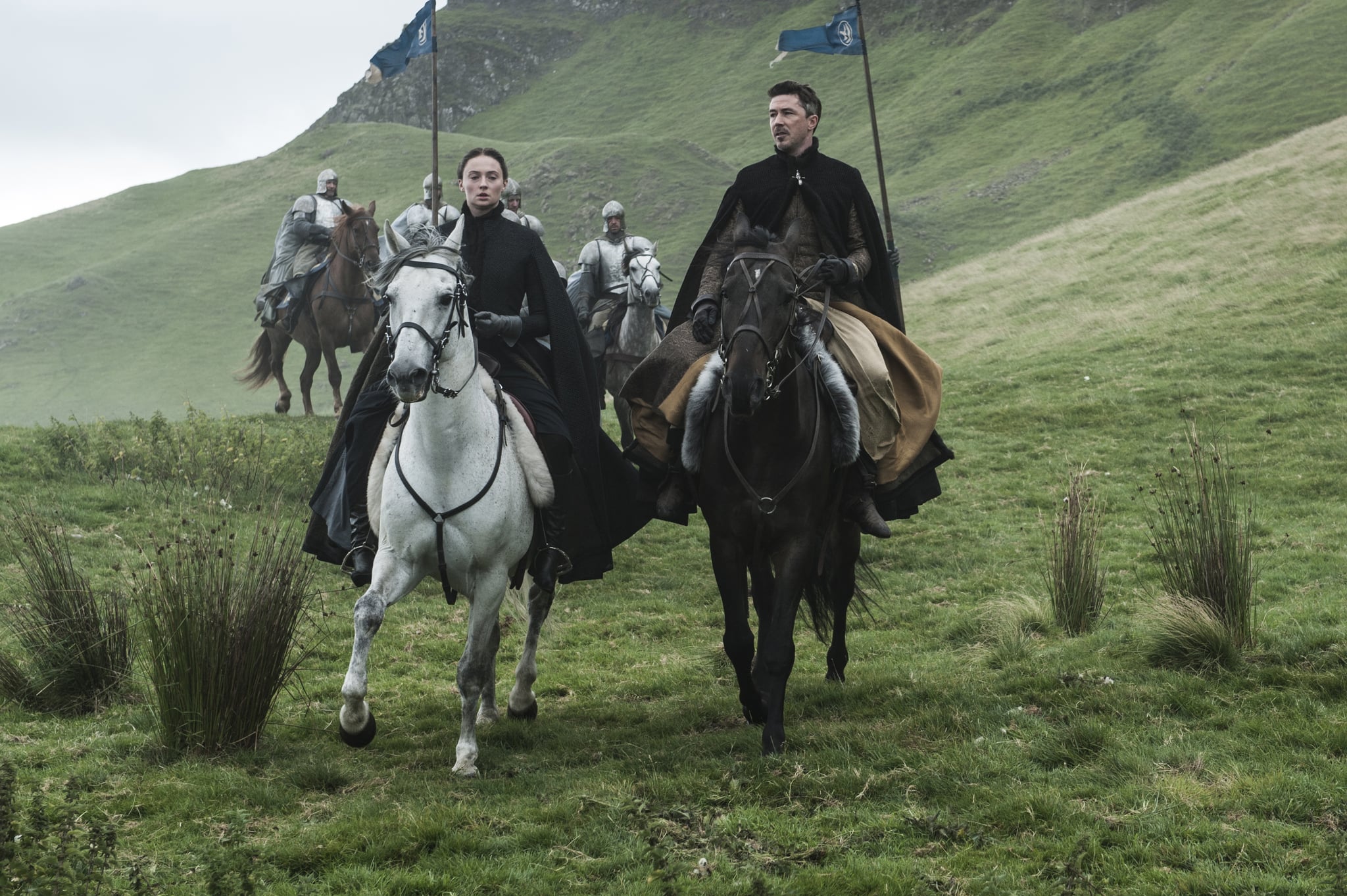 Let's be real: if you're the sort of Game of Thrones fan who feels confused about the show all the damn time, then you might have some questions about a phrase that's tossed around a lot. Especially in seasons six and seven, Sansa and Littlefinger often mention "the Vale" in conversation, which obviously might prove confusing if you have no idea WTF that even is. Is it a hair accessory? A location? A group of people? Don't worry — we have all the answers you need about the Vale, except what its leader's fate might be.

The Vale of Arryn is a northeastern kingdom in Westeros historically ruled by house Arryn . . . or, as you might remember them, Catelyn Stark's crazy sister, Lysa Arryn, and her creepy mama's-boy son, Robin. The capital of the Vale is the Eyrie, the skyscraper of a castle where Tyrion is held prisoner in a wall-less cell back in season one and where Littlefinger eventually pushes Lysa to her death through the "moon door." As you might recall, the region is surrounded by mountains and "hill tribes" of savages, who Catelyn Stark and Tyrion scuffle with when Tyrion is still Stark's hostage. Also contained within the Vale is Littlefinger's home territory of the barely habitable rocky islands, The Fingers.

Why Does the Vale Matter?

The Vale has maintained strong forces through remaining neutral, staying out of conflicts thanks to Lysa Arryn's isolationist tactics.

So, why is the Vale so relevant to Game of Thrones in recent seasons if we haven't actually seen it in years? Well, you must recall that Lysa marries Jon Arryn and rules the Vale as regent following his murder, waiting for her son to come of age and become Warden of the East. But because Littlefinger manipulates Lysa into wedding him, he becomes Robin's stepfather. Therefore, after Littlefinger murders Lysa, he becomes Lord Protector of the Vale, giving him access and control over the entire kingdom's resources, staff, and armies until his pushover stepson comes into power. (And, knowing Littlefinger, an "accident" will certainly befall Robin before that day comes.)

Who Are the Knights of the Vale?

The most important facet of Littlefinger's newfound control is his access to the Knights of the Vale, a legendary force of soldiers from the region. The Knights of the Vale are a particularly formidable force because of their experience in nontraditional battle scenarios — they often fight the mountain clans surrounding the Eyrie — and their sheer numbers. You see, while other noble houses in Westeros have suffered massive losses in the War of the Five Kings, the Vale has maintained strong forces through remaining neutral and staying out of battles thanks to Lysa Arryn's isolationist tactics.

These Knights of the Vale are known for their loyalty and are legendary as fearsome fighters, so when Littlefinger finally decides it's time for the Vale to declare for House Stark, his armies swoop in at the last minute to easily help Jon Snow and win the Battle of the Bastards.

So, What's Next For the Vale?

This is particularly important to note when watching Littlefinger's dealings with Sansa. If he were to marry her — as he so clearly wishes to do — she would become Lady of the Vale, gaining access to this fearsome army. If she were to scorn Littlefinger instead, he could revoke the Vale's support for Jon Snow, returning to the Eyrie with his knights and leaving the North woefully ill-prepared for the Great War.

Littlefinger is clearly plotting something, but we'll have to wait and see how the Knights of the Vale play into it. In the meantime, read up on the best Game of Thrones theories to predict what's next!

Grey's Anatomy
Grey's Anatomy Is Coming Back For Season 18, and So Are Meredith, Bailey, and Webber
by Grayson Gilcrease 1 hour ago