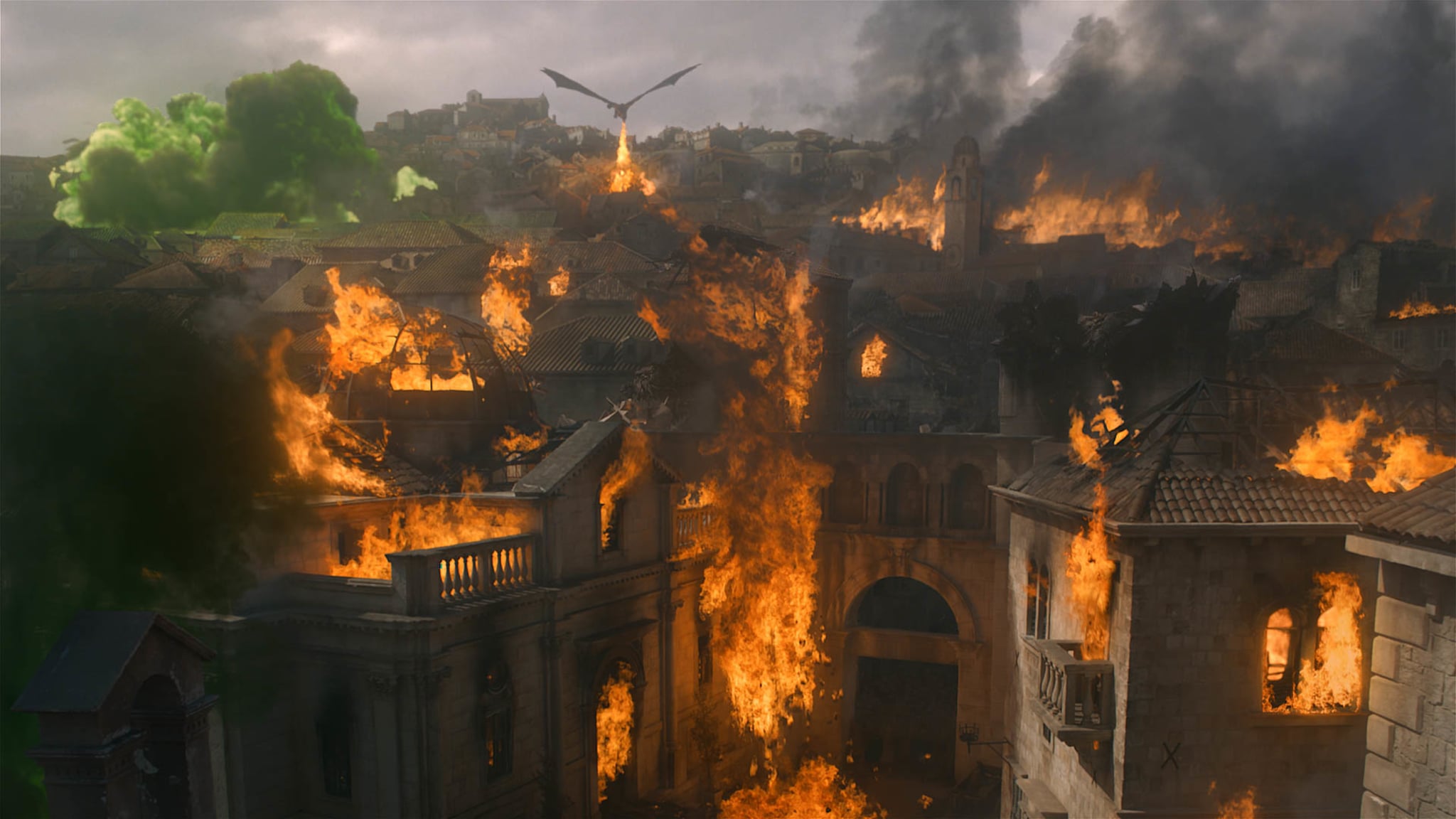 Warning: Major spoilers ahead for Game of Thrones!

If you thought Game of Thrones wasn't going to feature one last intense battle after the Battle of Winterfell, think again! The penultimate episode of the final season features a sack on King's Landing with Daenerys leading the charge. While her goal was to kill Cersei, she ends up fulfilling the popular Mad Queen theory and torches the whole place instead, innocents and all. And among all the flames and carnage is a familiar green sight — explosions of wildfire.

Wildfire is a substance that has popped up on the series several times. Though it's visually really cool with its green glow, it's established in Westeros as very dangerous. The neon concoction is a flammable liquid made by a group called the Alchemist's Guild. We only see it a few times, though each makes for a stunning scene: an explosion during the Battle of Blackwater, a vision that Bran has, and (coinciding with Bran's vision) the burning of the Great Sept of Baelor.

So where did the wildfire during Dany's attack come from? The wildfire from the Battle of Blackwater is commissioned by Cersei for protection against Stannis Baratheon's impending attack on King's Landing, though Tyrion uses it on Stannis's fleet instead. But the wildfire used to blow up the Great Sept of Baelor is possibly a different, older batch, and one with ties to Dany. In season three, when Jaime explains how he got the nickname Kingslayer, he explains that he was trying to stop the Mad King Aerys Targaryen from destroying King's Landing with the volatile liquid. Aerys had hidden many caches around the city, under various buildings, houses, and really just everywhere he could. Jaime killed him, however, before his plan could come to fruition.

As Daenerys and Drogon burn down King's Landing, there are several green explosions. These are likely the caches that Dany's father hid, which makes her attack on the city particularly sad (because, you know, killing a bunch of innocents wasn't enough). In her quest for the Iron Throne, she has always been insistent that she wasn't going to be like the infamous Targaryens with terrible reputations. In the end, she follows in her father's footsteps and even finishes the destruction he failed to bring. It's like the saying goes: "Every time a new Targaryen is born, the gods flip a coin." While she previously seemed like she'd escape and subvert the Targaryen madness that affected her family, it looks there's no turning back for Daenerys.

Celebrity Instagrams
The Cast of Insecure Just Wrapped Their Last Day of Filming, and We're Hella Emotional
by Monica Sisavat 15 hours ago