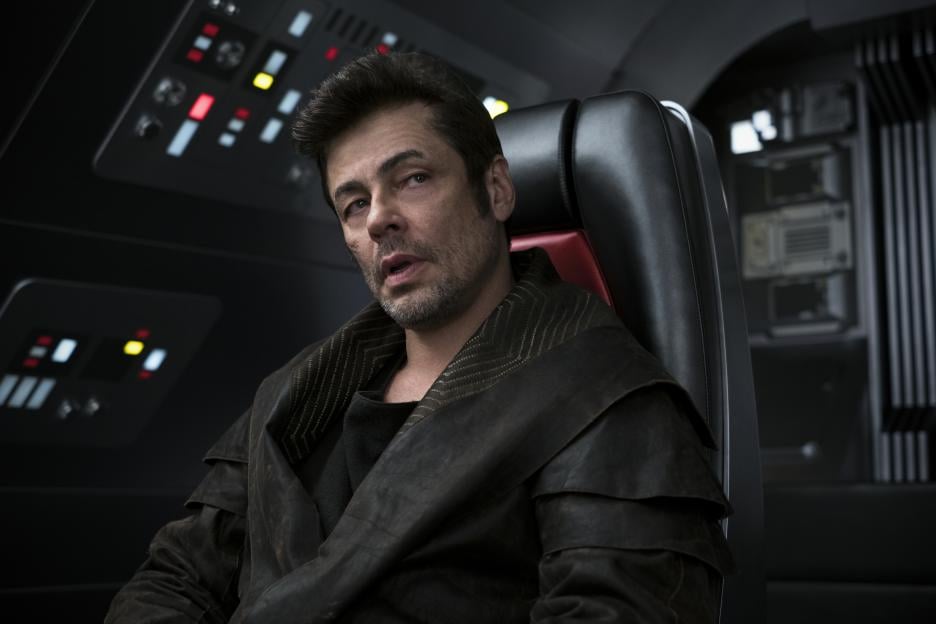 From the beginning, Benicio Del Toro's character in The Last Jedi has been mysterious. His casting in Episode VIII was announced in February 2016, days before the start of principal photography. Vague rumors circulated about the nature of his part, with trade publications like Variety reporting he might be a villain. But Lucasfilm kept fans guessing for over a year. The studio even kept Del Toro's character under wraps during the massive Star Wars Celebration convention in April 2017, and the actor himself did not make an appearance at the convention for the film's flagship panel.

We finally learned the character's name — "DJ" — in Vanity Fair's cover story on The Last Jedi in May 2017. Director Rian Johnson called DJ a "shady character" but refused to elaborate. As for the name, Johnson hinted that "there's a reason why we call him DJ." At Disney's D23 Expo convention in July, Del Toro likewise avoided giving any substantial clues about his character.

In a vacuum of information, fans began to speculate. One popular theory surmised that DJ could be Ezra Bridger from the animated television series Star Wars Rebels. The theory picked up traction when Ezra's storyline took a darker turn during the show's third season. Both characters also have scars on one cheek, which could have been strong evidence in support of the theory — but subsequent images of DJ now seem to suggest that an early image that appeared to show his scar on the same side of the face as Ezra's had been vertically flipped from the original. Questioned about the Ezra speculation on Good Morning America after D23 Expo, Johnson clarified that DJ is "his own person" and reiterated that the initials have a meaning in the story. Other wilder fan theories include the suggestion that the initials stand for Dooku Junior, making him the offspring of the Sith Lord decapitated in Revenge of the Sith by Anakin Skywalker.

The first solid information came in August's article in Entertainment Weekly, which provided an official blurb from Lucasfilm: "DJ is an enigmatic figure whose tattered, threadbare clothes and lackadaisical attitude conceal a sharp mind and expert skills." The article's author, Anthony Breznican, also clarified that DJ is a "slicer," the Star Wars galaxy's term for a computer hacker. The Puerto Rican actor's portrayal of a computer genius definitely aligns with Disney's and Lucasfilm's commitments to represent STEM (science, technology, engineering, and math) careers as an inclusive endeavor. This skill set apparently plays a role in the mission undertaken by Finn and Rose to the opulent casino world in Canto Bight in The Last Jedi. Trailer footage also indicates that DJ travels with Rose and Finn when they infiltrate the First Order.

The biggest clue about the character came on Force Friday, when the first merchandise for The Last Jedi was released in stores. A GameStop exclusive Funko Pop! of DJ had an interesting detail on the brim of his hat: a metal badge that reads — in the Star Wars alphabet Aurebesh — DON'T JOIN. Perhaps this, then, is the origin of the moniker DJ. Considering Star Wars has a long legacy of persuading self-serving scoundrels and wrong-doers to join the fight against oppressive regimes, maybe DJ is destined to follow the path of Jyn Erso, Han Solo, and Lando Calrissian and be sucked into the fight, then find reasons to stay.