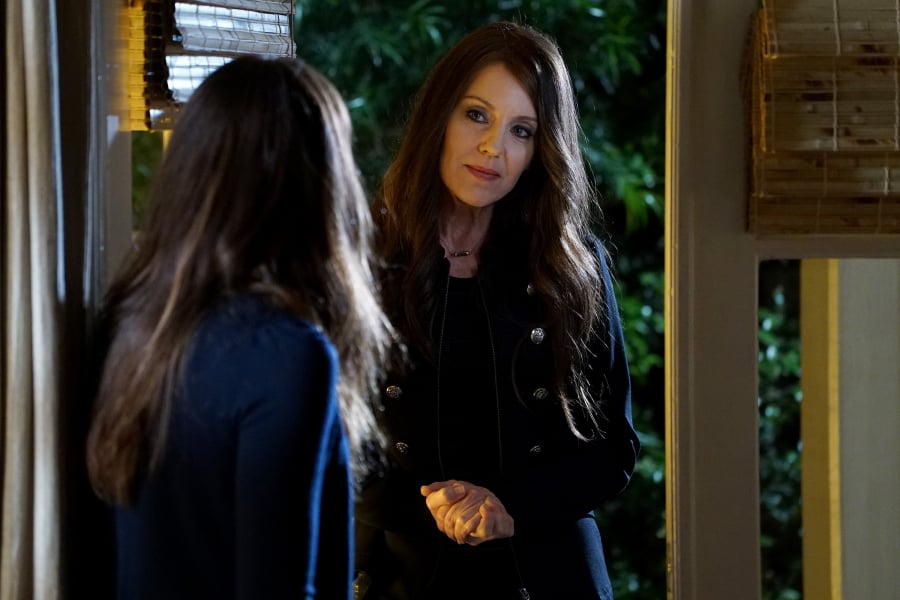 One of the newest characters to the cast of Pretty Little Liars is posing a lot of questions. Mary Drake has recently come to light, and she has an interesting past that includes ties to a lot of our favorite characters. So who is Mary Drake? Here are a few things we know after the season seven premiere.

1. She is Jessica DiLaurentis's twin sister.

We finally found the twin! This makes her Alison's aunt, who she is unknowingly at war with. Mary has used her looks to pretend to be her dead sister.

2. Charlotte is her daughter.

Mary gave birth to her in Radley Sanitarium, where she was initially being raised as Charles. Eventually Charlotte was adopted by Jessica and her husband, Kenneth. We don't know who Charlotte's father is.

3. She knows Spencer's parents for some reason.

Once again Spencer's family is roped into the drama and might be hiding something. In the season premiere, Mary comes to Spencer's house to talk to her parents. Apparently they know each other, but we don't know how exactly.

4. She and Spencer have something in common.

We don't know what it is yet, but during her visit, Mary says the two have something in common. The popular fan theories of what this could mean is that Mr. Hastings might have slept with Mary. Or Spencer could be a twin herself!

5. She was sent to Radley because of a tragic accident.

Another death resulted in someone going to the mental institution! Mary was babysitting when a child died, so she was sent away; she was released 23 years ago.

6. Dr. Elliot Rollins is her partner is crime.

Elliot loved Charlotte so much that he is pretending to be in love with Ali in order to get payback with her mother! It looks like he is the only one working with her so far. Both of them get rid of Ali by sending her to Radley, but their plan isn't over yet.

Everyone would probably guess that she and Elliot could be A.D., since they're evil and sketchy — but we all know this show likes to throw in more curveballs!

Netflix
Did Anyone Else Totally Miss the Sentimental Accessory Simon Wears in Bridgerton?
by Victoria Messina 11 hours ago

Grown-ish
With Grown-ish and New Music, Saweetie Is Already Confident That 2021 Is Her Year
by Kelsie Gibson 13 hours ago

by Kristin Harris 18 hours ago