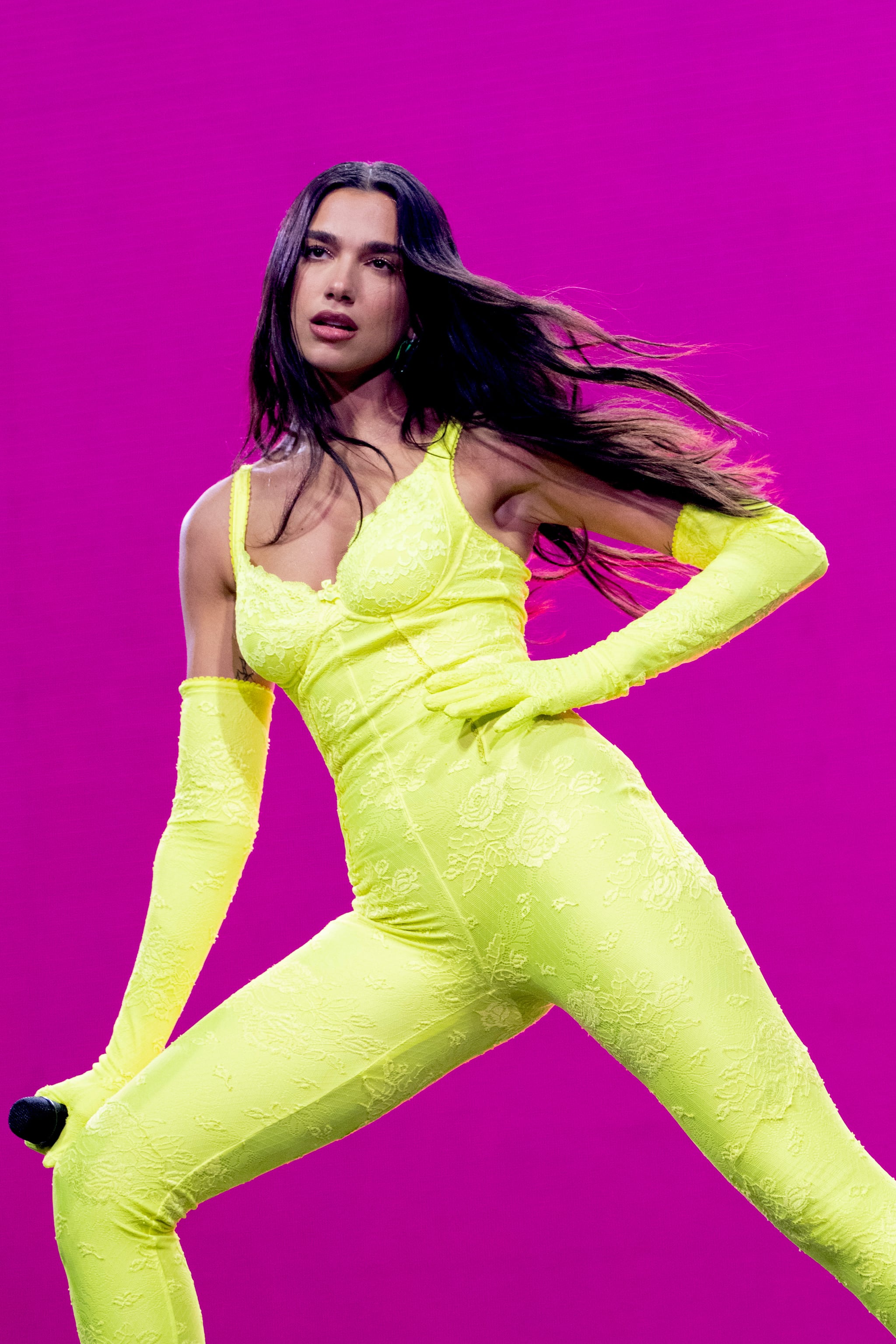 On a warm February evening in Miami, Dua Lipa kicked off her "Future Nostalgia" Tour with a pumped-up performance of "Physical," immediately followed by "New Rules" and her disco, dance-pop hit "Love Again." In the months since the tour began — her first since 2018 — Lipa has remastered running on stage and belting out power ballads without losing her breath, all while cycling through a colorful collection of catsuits straight out of 1985.

"It's been a massive learning curve for me — building stamina, running on stage, and putting the whole show on."

"It's just been such a surreal experience that we even get to be on the road and put this show on," Lipa told POPSUGAR in April. "It's been a massive learning curve for me — building stamina, running on stage, and putting the whole show on."

The thought of performing 90-minute shows for thousands of fans in packed stadiums night after night is enough to make almost anyone's head spin, but Lipa does it all with poise. From New York City to Amsterdam, she delivers complex choreography effortlessly, swaying her hips and nailing every note under the glow of the rainbow lights. Her power strut is immaculate, the rave energy is palpable, and the music is transcendent.

Between electrifying crowds at tour venues across the country, Lipa has also made time to swing by the Grammys in a vintage Versace ensemble and to release her "Sweetest Pie" collab with Megan Thee Stallion — plus a sweet music video to match. Since the start of the new year, her life has been on triple speed, but on days when she needs a break from the neon chaos of it all, her wind-down cocktail is a mix of good music, great company, and a few boozy drinks.

For the Grammy Award-winning superstar, downtime is rare, especially with production still underway on her debut film, "Argylle." But the 26-year-old singer still finds ways to keep the party going in between tour dates. "I'm really excited to just hang out by the pool and relax with [my friends]," she said. "It gets me really excited. I love being on tour and traveling and doing all of this, but the idea of just having a little bit of time with my girlfriends also sounds really nice, and when that's accompanied by Trulys, it seems like a perfect match."

Recently, Lipa released a limited-edition Truly Hard Seltzer Poolside Variety Pack, available from May 15 through the end of July. Inspired by summer cocktails, Lipa's variety pack features four new flavors with a five percent ABV — including Strawberry Melon Fizz, Orange Peach Fizz, Piña Colada Style, and Kiwi Mojito Style, one of her favorite drinks. "All the flavors are really fun and they smell amazing and they taste amazing," she said. "It really feels summery. But if I had to choose my favorite one, I think it's the Kiwi Mojito. It's just got such a good, minty, refreshing flavor, and the kiwi is amazing." "I feel like, in the UK, it's quite rowdy and fun. English people love to have a good time."

Painting a picture of her perfect relaxation day between tour venues, Lipa said the location doesn't really matter — a pool party, a rooftop party, the beach — as long as the weather is warm, the drinks are chilled, and she's surrounded by good friends. For peak feel-good vibes, Lipa added that good music is key. "I always go back to songs I love that put me in a really good mood," she said. "One of the songs I always go to is 'The Time Is Now' by Moloko, and it immediately gets me in a good mood. That song's amazing. I love it."

Relaxation days aside, Lipa always looks forward to getting back on the road and letting the pulsing energy of the crowd reinvigorate her. "All of [the tour] has been a massive highlight, and I'm quite sad because it feels like the North American tour just went by so fast, but I'm ready for UK and Europe next," she said. "Obviously, London is home, but I love going to Dublin; I love going to Glasgow. I feel like, in the UK, it's quite rowdy and fun. English people love to have a good time, so I think that's going to be an interesting tour, for sure."

On March 31, she performed the last show on the North American leg of the "Future Nostalgia" Tour in Seattle. Lipa has since made her way through Vancouver, Ireland, Scotland, Wales, and most of her English tour stops, but she still has half the globe to cover before the tour officially wraps.

Between touring, acting, and finding time for drinks with friends, can we still expect a new album from the "Break My Heart" singer soon? "It's starting to feel good. It's starting to take shape," Lipa said in a recent interview with Elton John on her "At Your Service!" podcast from iHeartRadio, adding that her new album is "50 percent" done. "I'm very excited about some of the new songs, so it's always exciting to look forward towards something."