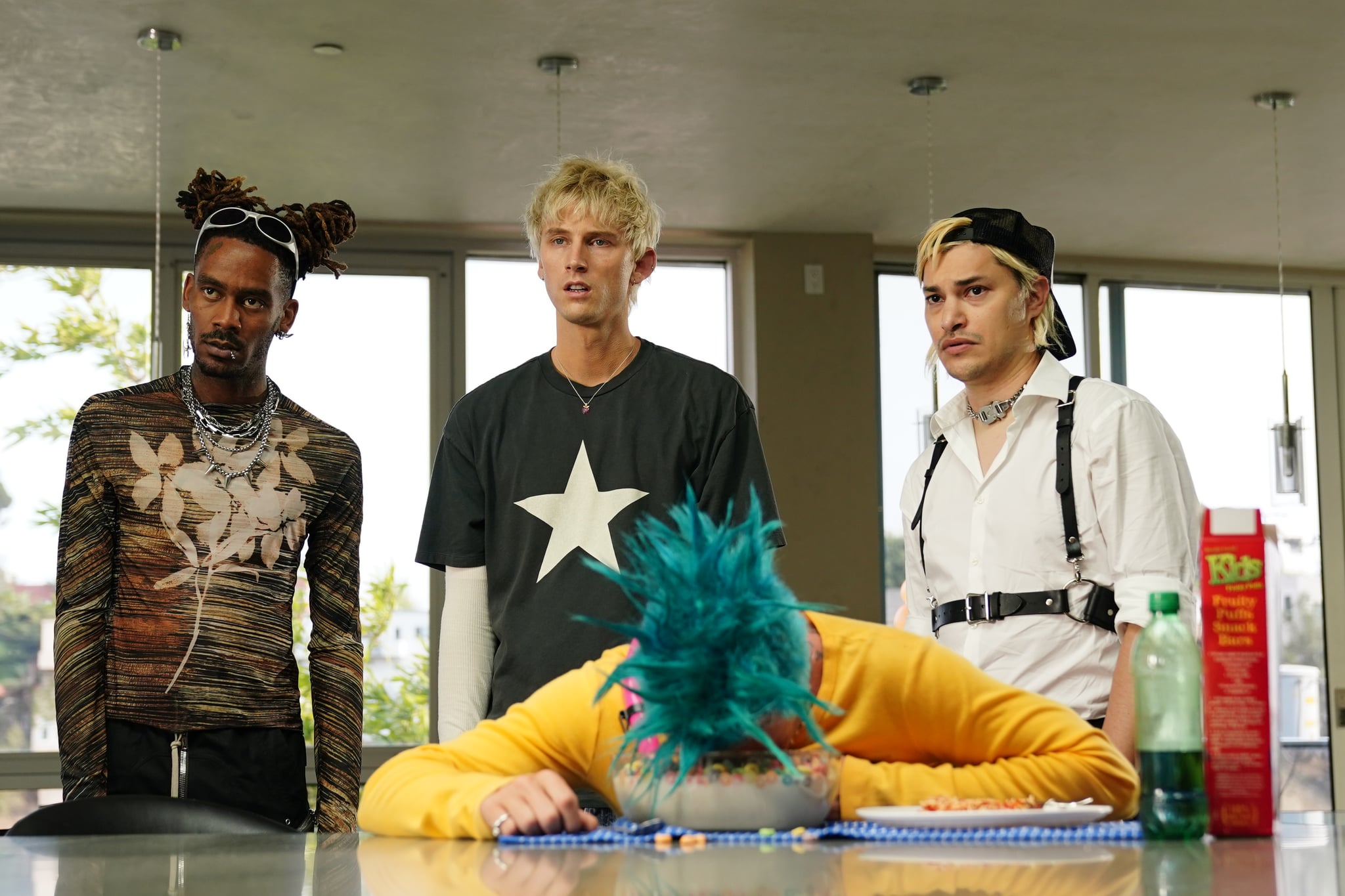 Machine Gun Kelly (née Colson Baker) and Mod Sun are making both their screenwriting and directorial debuts with their upcoming stoner comedy, "Good Mourning." The film follows MGK's movie-star character London as he receives a breakup text from his girlfriend, April (Becky G), on the same day he's scheduled to have the most important meeting of his career.

"The concept came to us via the universe giving me the exact situation that London encounters in the movie, which is [getting] a text that he reads as a breakup text and then [proceeding] to get relationship advice from all of the friends that are not in relationships, which then leads him down a spiraling road of confusion," Kelly tells POPSUGAR. "It was a real situation that happened. I asked Mod if he wanted to write a movie because I couldn't think of any other way to express my own spiral."

According to Sun, the movie also has to do with the "whole ideology of choosing between love and your career" and deciding which is ultimately more important. "I think me and Kells are both so work oriented, [but] we also realize that at the end of the day, love is probably the most important thing to us." 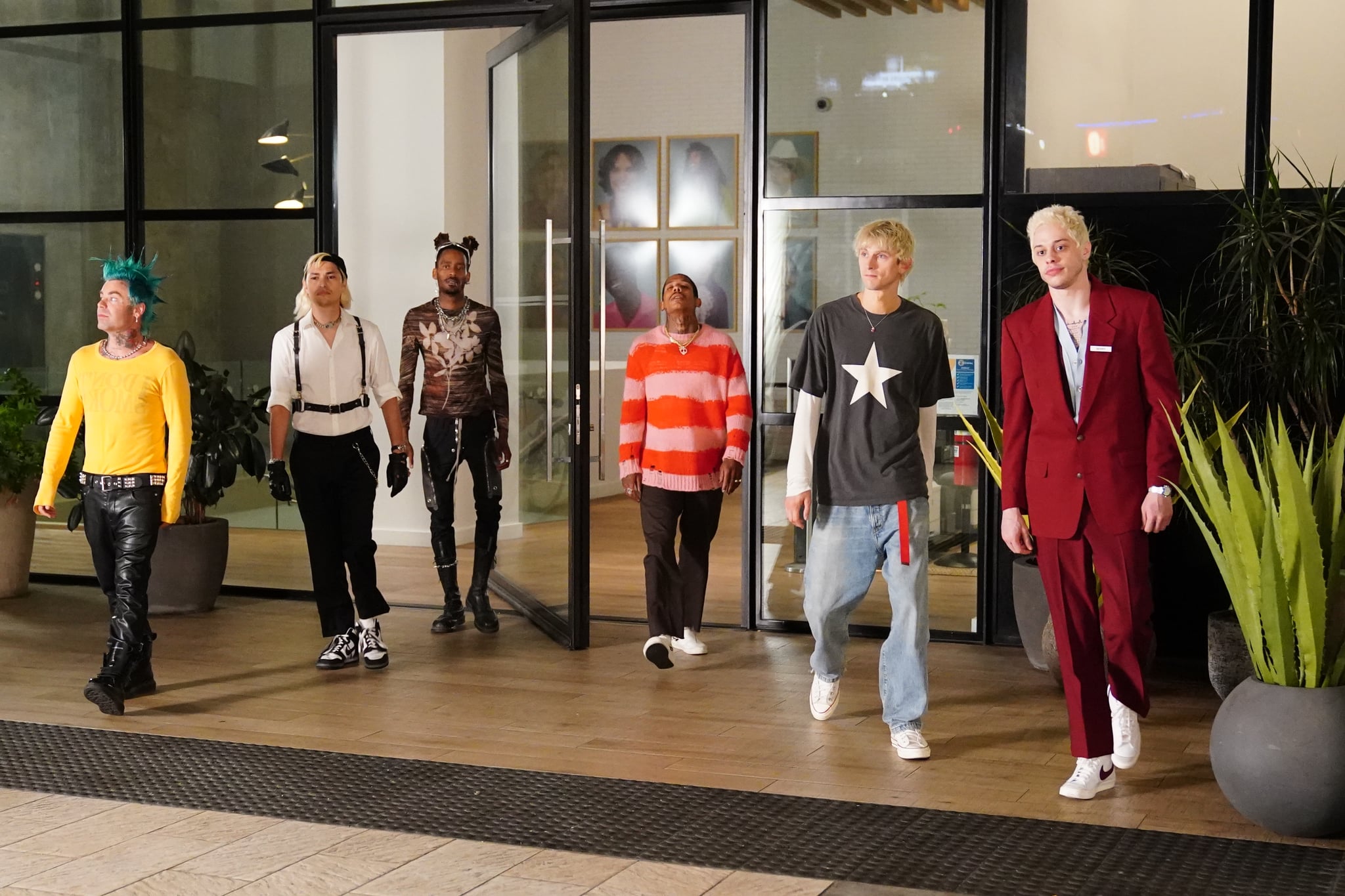 Their collaboration, of course, comes as no surprise, given that the two are friends in real life and have previously worked on music together. However, Sun says working on a movie together felt much more serious. "It felt like this different landscape allowed us to just flex a different muscle. It really was fun because it felt like a job," he explains. "Also, putting your art in the hands of other people was nice. It was a nice change of scenery. When you're making your own art, you're in charge of it. Giving it to someone else is such a trip — writing a line and hearing someone else recite it, it was a whole different kind of journey."

In addition to bringing the laughs, "Good Mourning" is packed with celebrity appearances. From Dove Cameron and Pete Davidson to Megan Fox and Whitney Cummings, it seems like almost everyone you can think of is in it. "We had a casting director, and much love to that person, but pretty much every person cast was through a phone call that me or Kells made. We pitched them the movie, and we pretty much wrote the part with these people in mind," Sun reveals. According to MGK, the only casting decision that came down to the wire was Cummings's role as London's agent, Maxine. "That was the only person we didn't talk to directly . . . her and Dennis Rodman, the two mystery players that ended up coming and slam-dunking when game time started."

In the film, there's a scene where London and his friends smoke a bunch of weed to try to save him from making things worse with April. Apparently, things got so intense that filming for that specific scene had to be broken up into two days. "We were like, 'It's a stoner movie, so the smoke [has] got to be epic,'" Kelly says. "We were smoking it out one time, and they were positive they shut all the sprinklers off in the house, but there was one that was left that they didn't turn off. The fire alarm went off, and this thing rained down on all the cameras and the lights and everything."

Similar to "Pineapple Express," "Good Mourning" is just a hilarious, lighthearted movie to enjoy and laugh along with. Sun and MGK were "sick and tired of old-school Hollywood trying to relate to the next generation with forced jokes and forced dialogues," so that's how the comedy came to be. "We're just missing the laughs," Kelly adds. "We need to laugh again and laugh at something that's not like, 'I need five degrees to understand what the joke is.'"

"Good Mourning" premieres in theaters and on TVOD on May 20.