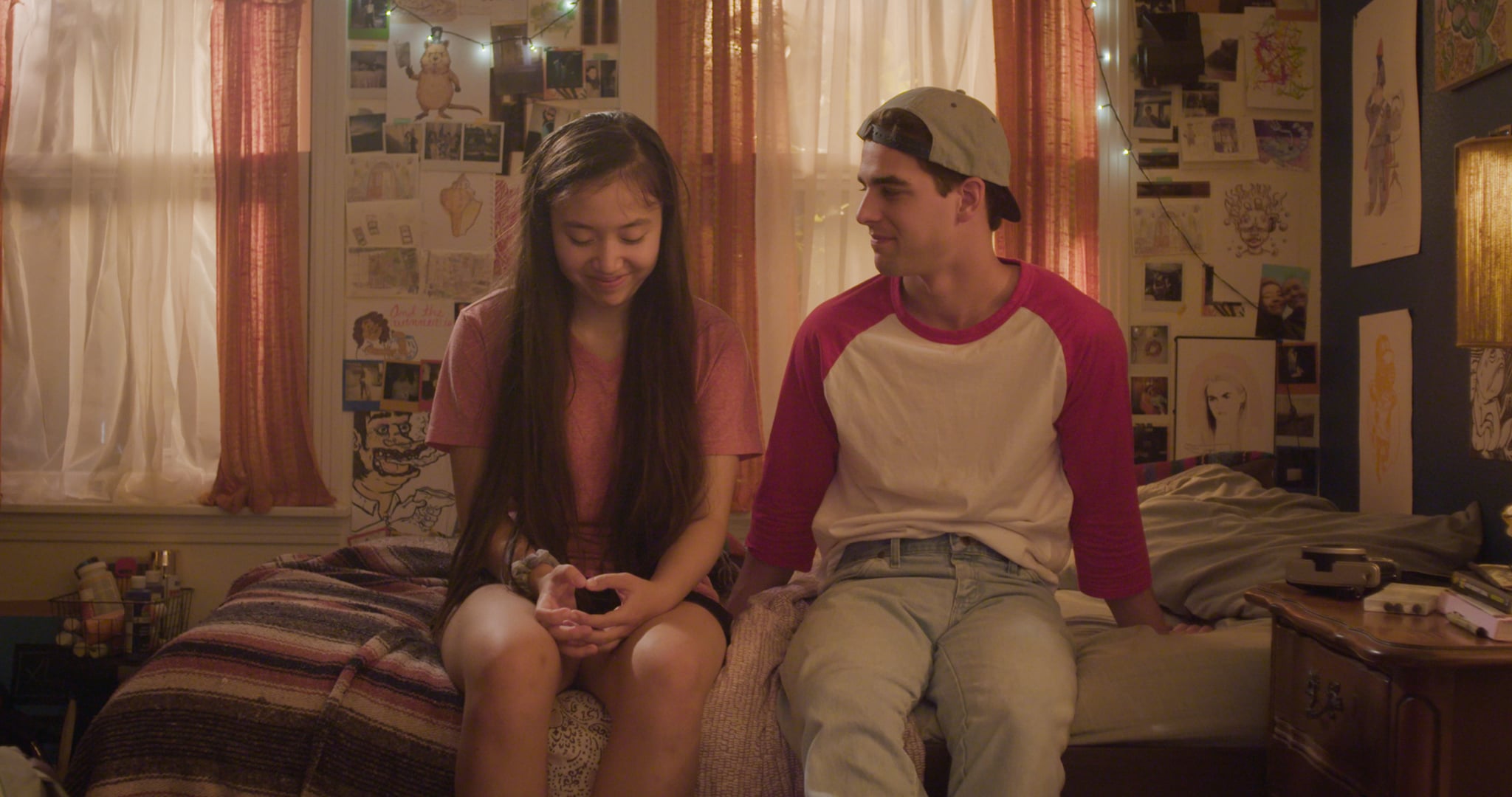 Mei Makino's Inbetween Girl thrives at the crossroads of cultural identity, sexual exploration, and complex relationships — the recipe for a modern coming-of-age film. In her directorial debut, Makino explores life through the lens of high-school senior Angie Chen (played by Emma Galbraith), and to put it bluntly, Angie is going through it. Her parents are getting divorced, she's crushing on a boy who's out of reach, and she's confronted with racial insecurities otherwise left undisturbed.

Inbetween Girl stands in contrast to your traditional teen rom-coms, although the director did use many classic films for inspiration. Instead, Angie confronts the messiness of her senior year head on, and in a film that tackles heavy issues, Makino makes room for hope, growth, and humor. There's a comical relatability to Angie's awkwardness, her quick wit, and even her immaturity. Angie's endearing flawed nature makes her easy to root for. To explore her story even more, POPSUGAR sat down with Makino, Galbraith, and costars William Magnusson and Emily Garrett to discuss their new film, which recently premiered at SXSW. Check out our conversation ahead.

POPSUGAR: Mei, I know this project has been on your mind for years now. What inspired you to get started? Why is now the right time to release the film to everyone?

Mei Makino: When it started, I was part of a writers group. I was working with a lot of youth in the Austin area. I had a seed of an idea, which was a boy crawls through a girl's window and they start this romantic affair. He keeps her a secret, and she has to learn to contend with it. I thought that was interesting, and I just started writing off of that premise, and then as we cast it and got more crew members involved, it snowballed and became what it is now.

I do think it's the right time because we don't see a lot of Asian American representation. And I think a lot of depictions we have seen in Hollywood are truly, really awful. Angie's character and the love and heart that Emma gives to her character really makes her feel like a real person and a real human. And I think that representation is great.

Makino: One-hundred percent. A lot of times, mixed people don't feel like they have a place at the table when it comes to conversations about race, because it's like, I'm half white, so of course I have a degree of white privilege. Talking about and feeling like my feelings were valid was really hard. There was a big part of me that did feel fraudulent in my Asian-ness because I'm actually half Japanese. And I can't speak Japanese. That was a big element that I brought to Angie's character, the insecurity of dealing with all of that.

Emma Galbraith: Yeah, absolutely. So much of Angie's character is taken from both Mei's and I, our experiences. We actually spent about a year and a half creating Angie's character after I was cast and had conversations about what it means to be mixed, and what it means to be Hapa, Asian American, a teenage girl, and all of those things combined. For example, Angie's dad is from a city in China called Fuzhou — that's where my mother's from. And a lot of the references in the movie about China come from my personal experience because I'm half Chinese. So much of me is in Angie.

Makino: Emma was so amazing while we were coming up for stuff. I would be like, "Can I reference this place in Fuzhou? Is that going to feel like too touristy or anything like that?" And Emma was always on it, quick responses, super helpful, and played a huge part in making Angie who she is.

PS: This week has been a very heavy and difficult one for the Asian American community, particularly with the shootings in Atlanta. A conversation that's been going on recently, and you referenced this, Mei, is the hypersexualization and fetishization of Asian women in the media. What I appreciated about Angie as a character is that she doesn't shy away from sexuality. She is a multifaceted young woman and character. Mei and Emma, how do you find that balance? Was it important to portray her in that way?

Makino: Yeah, I think one really important thing for me about Angie's sexuality is at the beginning — spoilers — but when she first has sex, it's not very good. And it's because she's not in control of the situation. But then, eventually, we have the sex scene and she's telling Liam what to do. She's doing things that feel good for her. She's very much in control of the situation. I wish I had that when I was a teenage girl, because I think a lot of times, the depictions I had seen of Asian women and of women in general, any type of woman, was you let the man take control and you put your pleasure on the side. Angie very much puts her pleasure at center focus, which I think is awesome.

Galbraith: For sure. I think the answer to "How do we combat hypersexualization of Asian women in media?" is not, "Let's tell stories about Asian women as completely nonsexual beings," because that's not realistic either. The answer, as I think to every stereotyped group of people in media, is to tell stories about them as real human beings. Not sex machines and not completely nonsexual beings, but who they really are. I think this film does that really well. 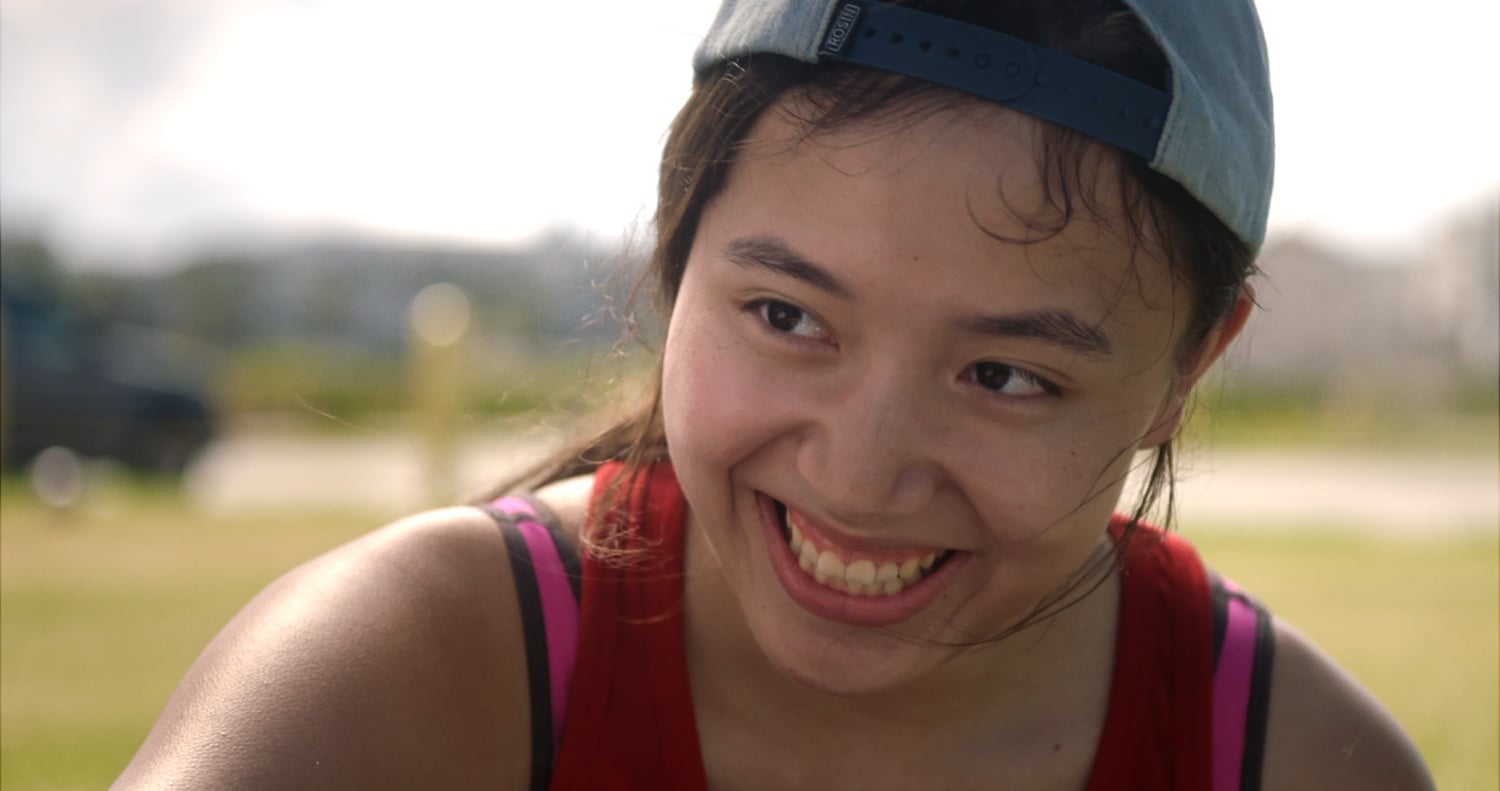 PS: William, I wanted to ask you about Liam. How do you prepare to take on a role that's different than your stereotypical love interest?

William Magnusson: Mei and I were just like, "Why don't we just do you, William, as you are and then we put you under this different context?" A lot of the mannerisms and the way I talk, things I say — it's me. But then I had to put myself in the shoes of this person who is doing something pretty awful.

PS: Emily, I would love to talk about how Cheryl also pushes back against some mean-girl tropes. When you read the script when you were in the auditioning process, was that something you were psyched about?

Emily Garrett: Yeah, for sure. I definitely noticed that she was not at all the mean-girl trope. But honestly, I wouldn't say I was like, "Oh, I'm so glad, like, this isn't just a mean girl." It was so natural to me because I feel like this is how it works in real life. So many people just make assumptions that when there's another girl who you think of as X, Y, and Z, like, "Oh my gosh, influencer," all this stuff, you automatically assume they're going to be a certain way, act a certain way. Whether that be mean or stuck up or anything. I feel oftentimes that's not true.

PS: One scene that hit me particularly hard was when Angie told everything to her mom and she realizes that her mom is a human. It feels like for the first time, she's hearing her mom had a life before her, which is a realization that most young adults come to at some point. What was it like writing that scene between two different generations of women and encompassing the individuality of both?

Makino: I think writing that scene was based on feelings I had. You look at your parents, and you even look at teachers sometimes, and you're like, "Oh, you didn't have a life before this." And then they'll say something, and you're like, "Excuse me, what? Hello?" I really liked the idea of having the arc with Angie and her mom be, "I have nothing in common with her, but actually I have everything in common with her." Because I think so much of who we are is shaped by the people who raised us and that is passed down. They are going to be very similar whether they like it or not.

PS: In your mind, when do you imagine Angie revisits her time capsule and finally opens it? Where is she at in her life at that point?

Makino: It's interesting, because when I first wrote it, Angie's 16, and then she's specifically addressing 26-year-old Angie, which is really funny because when I met Emma, she was 16 and I was 26. It was another serendipitous thing. I imagine it's about 10 years down the line, mid-20s, she opens it up. I think young Angie is going to give her some wisdom.