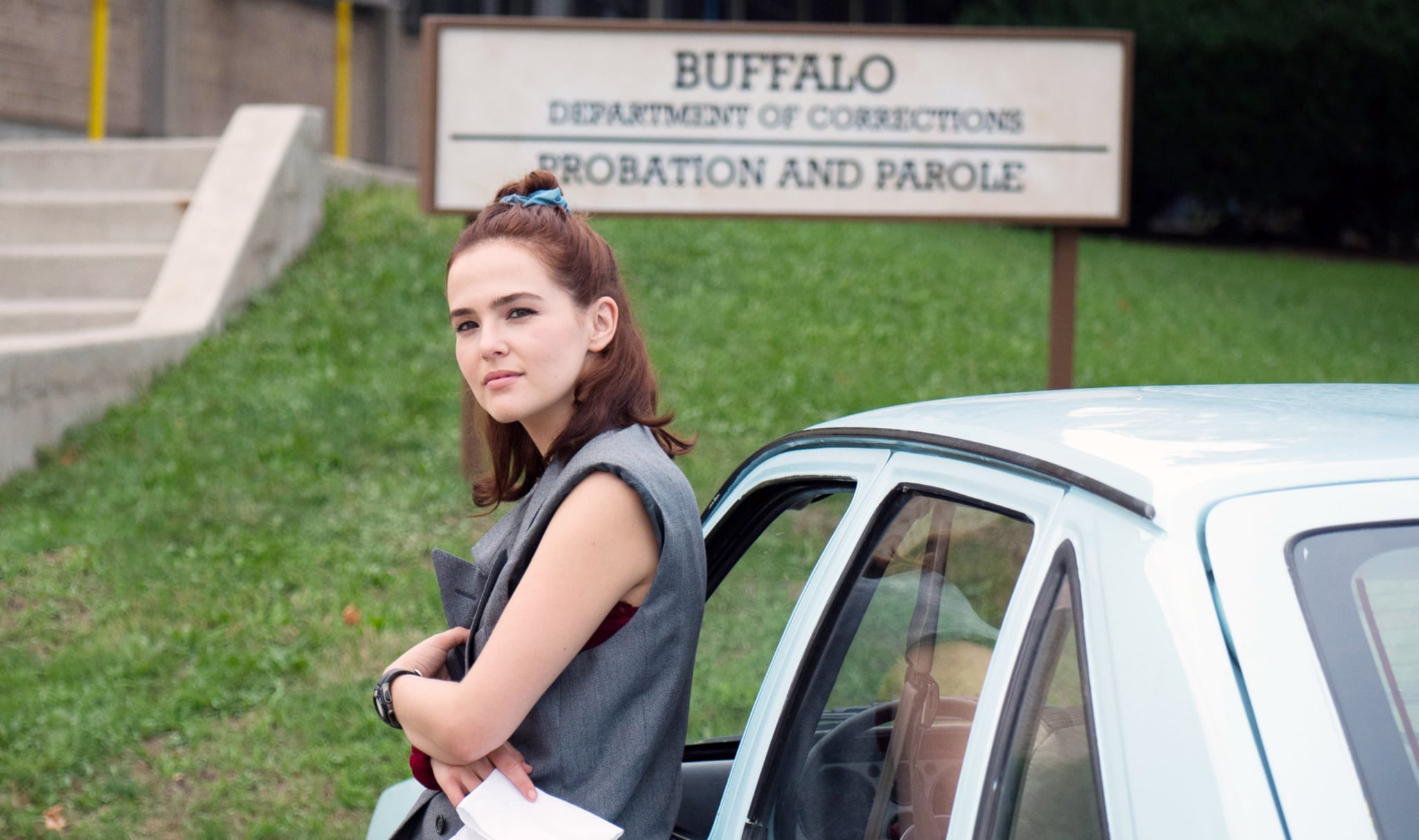 The opening scene of Zoey Deutch's new film, Buffaloed, features the 25-year-old star sprinting to an unspecified location, screaming, and brandishing a gun as she says in a voiceover, "My unathletic ass just ran halfway across Buffalo because an assh*le in that building f*cked with my money. Do not f*ck with my money!" That's all it takes for the movie to grab your attention, and it doesn't let go for the rest of the hour and a half.

The comedic drama follows the complete and total spiral of Deutch's character, Peg Dahl — a Buffalo, NY, native whose penchant for taking monetary risks and accumulating debt lands her in quite a few sticky situations. Determined to escape a life of poverty, she takes matters into her own hands by becoming a debt collector (ironically) and residing in a moral gray area as she scams, sweet-talks, and bucks her way through the shady business. And you know what? We can't help but root for her.

"She really goes against the traditional expectations of women and embodies the feminist idea of providing for herself without being reliant on a male figure."

Deutch, who also served as a producer on the film, found the character to be oddly likable and relatable. Not because of her deceitful tactics, of course, but because of her ambition and steadfast desire to make something of herself. "It's a funny and poignant story," Deutch told POPSUGAR over the phone on Feb. 14. "It's about a young woman who's obsessed with financial independence and obsessed with making enough cash to get out of her blue-collar existence. It's about somebody who will do anything to escape their dead-end life. But she finds herself in this ethically debatable industry, which can destroy her chances of becoming somebody to begin with. When I read the script, I was really attracted to her greed and drive."

Throughout Peg's journey of hustling, she's constantly told to settle down and find a man to take care of her. And even when she proves that she has the gall to be a leader in the male-dominated world of debt collecting, she's belittled by her male peers. But make no mistake, Peg can hold her own. "I love her sharp mind and even sharper mouth. It's fun to play that type of female protagonist," Deutch said.

Deutch also believes that Peg gives voice to women who feel stuck in places that discourage them from achieving financial stability. "You can call it greed, but the greed is, at its core, coming from a place of wanting freedom," she said. "Peg has seen her mom and everybody else in her life, so she knows that if you never have financial stability, you'll never be free. She really goes against the traditional expectations of women, and she embodies the feminist idea of providing for herself without being reliant on a male figure."

That firm stance against being the damsel in distress is evinced by Peg's strong-willed nature and rough-around-the-edges mannerisms. "I hurt myself a lot because I kept falling and hitting my leg on a car door or something," Deutch revealed with a laugh. "And I was screaming so much, I kept getting laryngitis. It was a very physically demanding experience. I did not hold back at all."

Related:
Mark Your Calendars Now For These 2020 Films

Still, Peg's personality has its nuances. Juxtaposed with her tenacious attitude is her soft spot for her late father and resentment toward her mother, Kathy (Judy Greer). But she later discovers that her family dynamic growing up wasn't all that it seemed. "You get a window into the image that Peg has of her father and the reality of what he was really like," Deutch said, describing a potent scene between Peg and Kathy. "It's a moment where you see truth and it grounds all of Peg's humor and chaos." The emotional exchange between Peg and her mother ended up being Deutch's favorite scene to shoot, and once you see it, you'll probably understand why.

The evolution of Peg and Kathy's relationship is something Deutch really worked to perfect as a producer — a job she enjoys quite a bit. "An element of why I love producing so much is that I think more information and more details make me a better actor," she said. And to her point, she is damn good in this film. So gather your coins and head to the nearest theater to see Buffaloed, which is out now!