By the look on Andy Cohen's face, it's safe to say fatherhood is treating him well. The new dad stopped by The Today Show to discuss how the first few weeks of parenthood have been going. He spoke with Hoda Kotb and Savannah Guthrie about everything from his decision to go with a surrogate to how he instantly fell in love with his son.

"I was wondering, 'Can I do this at this moment in my life?' I'm 50. OK? Let's be real here," he said, adding that it was writing that actually inspired him to become a dad. "I think I was getting to a point in my life where I was looking at: where am I going? And where am I headed? And what do I want for the rest of my life?" he said. "Writing two books, publishing two books that were diaries of my life really caused me to look at how I was living my life every day. I published three years of my diaries. I was like, 'Wow. I could keep putting the same book out every year or I could do something different. I don't think this is all there is for me.'" 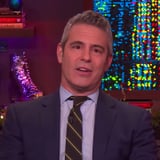 Andy Cohen Announces He's Going to Be a Dad: "Family Means Everything to Me"

Although making the choice between adoption and surrogacy can be tricky, Andy explained that going with a surrogate was the best decision for his family.

"I was fortunate to have the means to be able to [have a surrogate]," he said. "It can be expensive and complicated and I just said 'I'm gonna do this.' I'm gonna try to do this and I did. It's incredible to me, as I've now learned, that surrogacy is illegal in many states. And I don't understand why it's illegal in New York and New Jersey, which is why I went to California. That's where my wonderful surrogate was who I owe so much to."

Andy also dished that he recently went out for dinner with friends, but was thinking about little Benjamin the entire time. "There is a comfort in knowing that he's there waiting for me," he said. "I went out for my first night away from him, just for dinner with friends the other night, and I was sitting there and I realized, 'Wow! I love it that he's there at home for me.' It's an anchor. It's my family. I was like, 'I love this feeling.'"

In fact, Andy has been cherishing his time with Benjamin so much, he even admitted to loving him more than social media. "I look at him the way I used to look at Instagram," the 50-year-old dad joked. "I just sit and stare at him. I'm like, 'Well, this is more interesting than a bunch of hot guys on my feed.'"