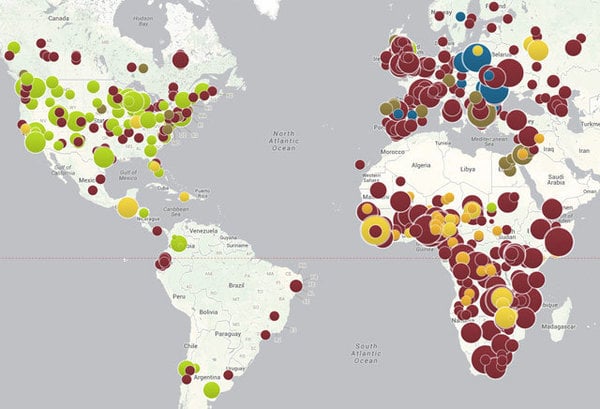 When it comes to vaccinations, most parents are willing to endure tear-filled doctor appointments if it means keeping their children healthy. Others believe that the vaccines weaken their child's immune system and cause other life-altering diagnoses. Most doctors let parents make their own decisions on the matter, but new data may force them to push patients in a certain direction.

The Council on Foreign Relations developed an interactive map showing the growing prevalence of "vaccine-preventable outbreaks" since 2008. As seen above, the most common outbreaks in the US are whooping cough and measles, represented by green and red dots respectively. The growth in outbreaks is considered to be due to the antivaccine movement that began in 1998 — the year Dr. Andrew Wakefield released a paper that linked the vaccines for these diseases, along with those for mumps and rubella, to the development of autism in children. In 2010, however, Wakefield's findings were discredited. Yet because of the support from famous moms, like Jenny McCarthy, parents continue to refuse vaccines. The CFR believes these parents put their own children at risk, as well as the general public. If a child does receive a shot and it doesn't work, then they are susceptible to an infection that a nonvaccinated children may be carrying.

Source: Council on Foreign Relations
Child Health And SafetyParenting News
Around The Web

Dr. Seuss
6 Dr. Seuss Books Will No Longer Be Published Due to "Hurtful and Wrong" Racist Depictions
by Alessia Santoro 5 hours ago

Nostalgia
A Rugrats Reboot Is Coming to Paramount+, Featuring the Original Voice Cast!
by Alessia Santoro 5 days ago

Parenting
This Mom Teaches Her Kids That Virginity Doesn't Exist, and Her Explanation Might Convince You, Too
by Kate Schweitzer 5 days ago