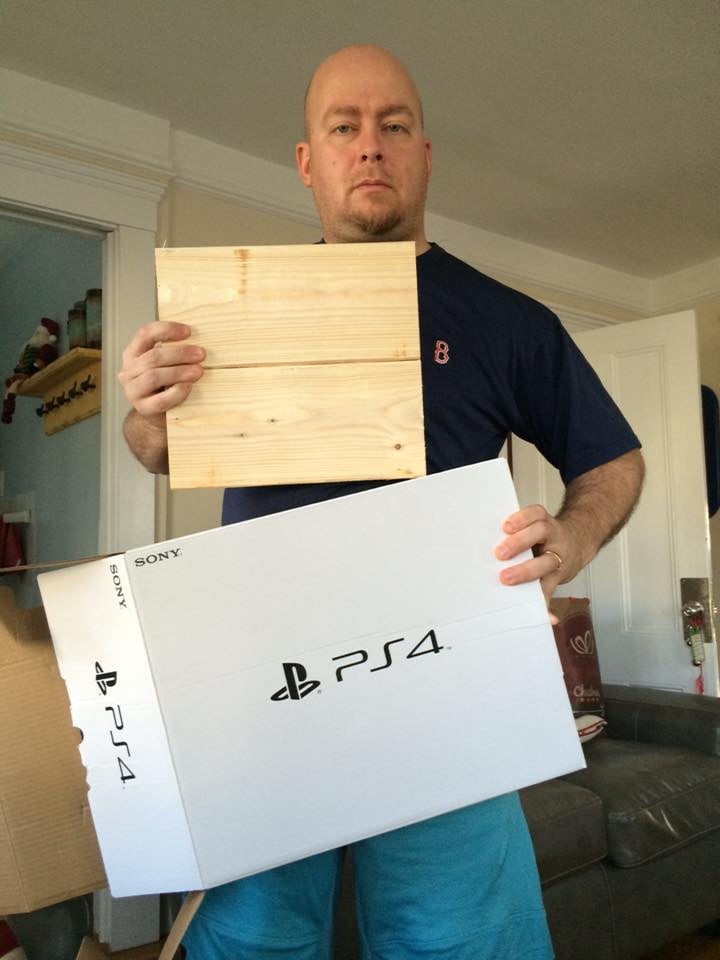 Have you ever returned a product to a store and thought, That was too easy . . .? Such lax return policies might come in handy if you accidentally bought a defective toy or a shirt with a snag, but for one boy on Christmas morning, it ruined the magic of Santa Claus.

Kristin Lundy, the Massachusetts stepmother of 9-year-old Scott, shared what happened — alongside a picture of the boy's father — on Facebook:

Today started out as a great morning. Santa came and delivered all the gifts to my 3 boys everything they wanted....or so we thought!!! My 9 yr old son ripped open the wrapping on a PS4 and yells YES THIS IS THE BEST CHRISTMAS EVER DAD CAN WE SET THIS UP NOW.... To my husband and sons surprise when they opened the box they didn't find a PS4 ....

Inside the box for the PlayStation 4 console was a block of wood signed with a crude drawing and an inappropriate message.

They found a wooden replica PS4 in its place with a writing that said from Cock and Balls with Love. This was bought at the Target in Saugus. Speaking to other family members my 9 yr olds cousin also got a wooden replica.... This has ruined his belief in Santa.... Buyers be aware of this scam ....

According to WHDH News, when the family returned the box to their local Target, an employee said it does happen sometimes and can even occur "through the distribution, the assembly line, or something."

Thankfully, Target apologized for the mistake and gave the family a new PlayStation 4, along with a game and a $100 gift card. Let's just hope the boy's shock and disappointment is forgotten come next Christmas.