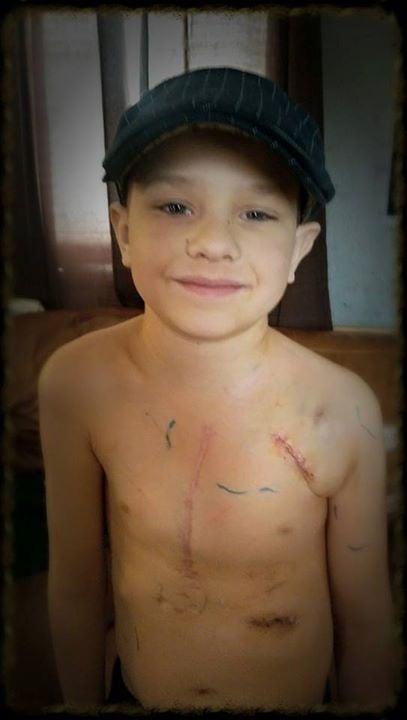 After 7-year-old Carter Gentle — who was born with a congenital heart defect — had an emergency surgery to repair his pacemaker, the scars left him in tears. He worried people would think he was ugly.

To prove him wrong, his dad posted a photo of Carter, scars and all, on Facebook, and the result has been truly unbelievable. The photo, which was uploaded on Saturday, has been shared 100,000 times and garnered more than 1.3 million "likes" and counting (just watch the ticker move!).

"We were a little apprehensive to post this but I feel it's important," proud father Mark Gentle wrote on Facebook. "Carter took his bandages off this morning. He cried for 45 minutes when he saw his scars. He said that he's afraid people will think he is ugly. This was hard to hear as a parent. We told him that his scars are beautiful and make him look like a superhero."

Not only has the public outpouring of support been more than the family could have ever expected, but it prompted others to share photos of their own scars. Just one day later, Mark took to Facebook again to thank posters for their words of encouragement.

"I am completely overwhelmed to the point of tears," he wrote. "I posted this pic simply thinking it would be a good exercise for Carter and boost his confidence and this happened. I cannot thank you all enough for sharing and getting this thing out there. . . . I assure you, every comment is read and very much appreciated."