In the hours following the devastating shooting at a Florida high school — which took the lives of at least 17 people and marks the 18th school shooting in 2018, for which we've only had 45 days so far (that's a shooting every two and a half days, or one every 60 hours) — I watched dozens of news clips to try to piece together what happened.

Nearly every video I clicked on was generally the same. A stoic, resigned newscaster explained what happened while footage played of students fleeing the campus. Arial shots of SWAT team members circling the building and officers putting the alleged shooter into the back of a police car. Then, nearly every reporter announced that there was a video filmed from within a classroom during the active shooting. A video taken by a student who posted it to Snapchat. A rare glimpse at what it was really like inside.

Before playing this video, they all — every single one of those reporters, anchors, and newscasters — carefully warned viewers of the graphic nature of what they were about to see. Some called it "deeply upsetting," others said it was "disturbing" and "hard to watch."

Indeed, after seeing it, it was all those things.

It was upsetting. It was disturbing. But the last thing we deserve anymore is a warning. The last thing I want anymore is for someone to give me "viewer discretion" or to be concerned with my feelings, with how best to prepare me for the now-ordinary tragic news that more children have lost their lives senselessly.

The last thing we should ever allow is for this to be seen as ordinary. But we have. 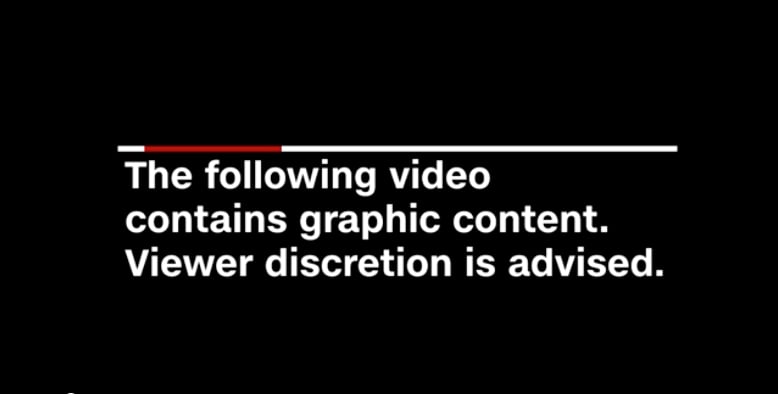 You might argue that these newscasters have to do it, that it's simply the appropriate thing to do when dealing with such R-rated content. That you wouldn't want to accidentally see this on the 6-o'-clock news while your family was just trying to eat their meal at the dinner table. That it's to protect parents and their children. I have to wonder, though: How are we protecting the kids who lived it? And who continue to die by it?

After watching that video, I got to go eat Valentine's Day cupcakes with my kids. I got to put them to bed. This morning, I got to wake up to their earlier-than-the-alarm-clock cries and feel damn lucky that I'm not one of the parents of one of the students who didn't make it out of that Florida school yesterday.

I have to wonder, though: How are we protecting the kids who lived it? And who continue to die by it?

So, please, newscasters of America, stop warning us. Stop being concerned with our sensitivities when we are already so desensitized. Stop worrying that what we see will disturb us when it will, sure, but only just enough to restrict our thoughts for a few moments before we move on to the next item on our to-do lists. Stop telling us that it'll be hard to watch. It's only as hard to watch as anything can be that happens every two and a half days. Every 60 hours.

In fact, don't just stop warning us. Play that footage when we least expect it. Make it the video that plays before those YouTube clips of cute kittens or the ones of babies eating lemons. Turn it into one of those pop-up ads that startle us when we're scrolling through an online article. Reformat it as a GIF that's on a never-ending loop. Drop it in between commercials of our favorite sitcoms. Offend us with how loud and how often and how randomly you can play that footage. Make us curse our computer screens.

Because, if you're outraged that someone didn't warn you before showing a video of children crouching down on the floor, screaming in abject fear, uncertain whether they'll live or die, as booming gun shots fill the air above them, then be f*cking outraged. Just be outraged for the right reasons. And be outraged enough to do something about it.