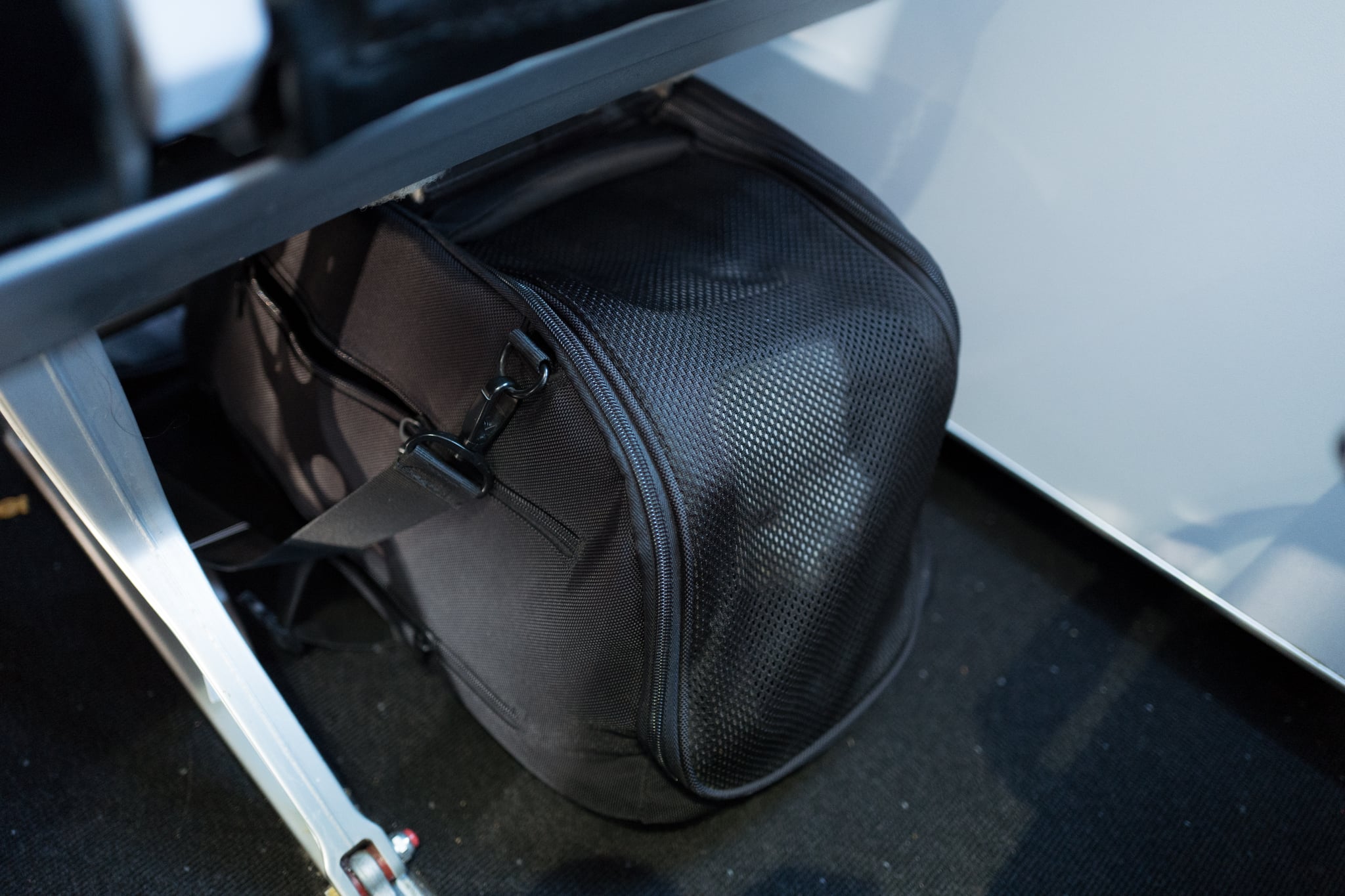 We apologize in advance for this tragic bit of news, because there's truly no bright side to the situation — only a devastating warning for pet owners who travel with their fur-babies. On March 12, a passenger's dog died after she was instructed by a United Airlines crew member to stow its carrier in an overhead storage bin for a flight from Houston to New York.

According to 30-year-old Maggie Gremminger, a witness who traveled on the same flight, the dog owner was traveling with a young girl and an infant and had stowed her French bulldog in a TSA-approved dog carrier. When a flight attendant took issue with the way the carrier was stowed under the seat in front of the passenger, Gremminger tells People that the crew member compelled the passenger to stow the carrier in an overhead bin for the duration of the flight: "After the flight attendant asked her to move it above, the woman adamantly refused, communicating her dog was in the bag. There was some back and forth before finally the flight attendant convinced her to move the carrier to the bin above."

I just flew into LGA and witnessed a United flight attendant instruct a passenger to put her dog bag in the overhead bin. It was clearly a dog and while the customer was adamant about leaving it under the seat, the attendant pushed her to do so. (1)

Myself and a fellow passenger felt like that was NOT a thing. I am not a flight attendant tho. Maybe they have air ventilation in there that I didn’t know about. I tried googling rules about pets on board but didn’t have ample time before takeout. (2)

For takeoff and over the following 30 minutes, stunned passengers reportedly listened to the bulldog bark and whine from within the overhead bin. After that, it went quiet. By the time passengers were able to disembark from the aircraft, the pet owner discovered that her dog had died in its carrier during the flight and collapsed into the aisle with its body cradled in her arms. Both the passenger and her daughter cried over their dead pet while a stranger held the newborn, recalls Gremminger, and the flight's crew reacted with shock.

At the end of the flight, the woman found her dog, deceased. She sat in the airplane aisle on the floor crying, and all of surrounding passengers were utterly stunned. (3)

I am disgusted and traumatized. Pets are family. How could a trained flight attendant instruct a passenger to place her dog in that bin. It was her job to understand the plane and it’s rules/limitations. (4)

Following the flight, Gremminger tweeted a heartbreaking photo of the distressed mom and her kids in the LaGuardia airport terminal. Next to the crying woman and her baby's stroller is a soft-sided dog carrier, the type United's pet policy allows flight passengers to carry on for $125 a pop.

Despite the passenger's insistence that a dog was inside (and the barking that followed), Gremminger tells People that the flight attendant who demanded the carrier be moved into the overhead bin claimed that she hadn't realized it contained a live pet. United Airlines issued an identical statement to People, Time, and The Points Guy, taking full responsibility for the dog's death:

This was a tragic accident that should never have occurred, as pets should never be placed in the overhead bin. We assume full responsibility for this tragedy and express our deepest condolences to the family and are committed to supporting them. We are thoroughly investigating what occurred to prevent this from ever happening again.

While nothing can ease the pain of losing a beloved family member, especially in such an unprecedented way as this, United Airlines is supposedly working to support the passenger and her family. But coming from the airline with the worst track record for pet deaths in recent years . . . is it too little, too late? If you plan to fly with furry members of your family anytime soon, be sure to educate yourself on the airline's pet policy and be willing to stand your ground about the rules — it could save a pet's life.